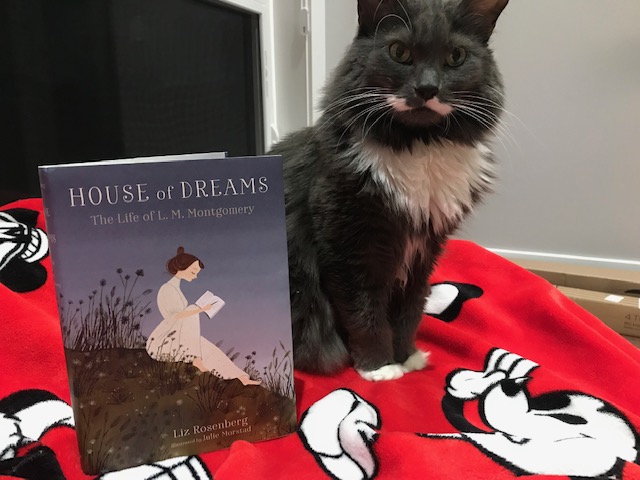 I am a terrible excuse for a girl named Anne who loves books. I’m embarrassed to put this down in writing, but I have never read Anne of Green Gables by L.M. Montgomery. What kind of Canadian book-lover am I? A poor excuse for one, that’s for sure. And instead of going ahead and getting the book(s) out from the library, I’ve waited until a related book ended up on my doorstep to review, so thanks to Candlewick Press for trying to remedy this by sending me a beautifully illustrated biography of L.M. Montgomery. And I apologize for being so lazy.

For those of you who aren’t familiar with this name (shame on you too!) L.M. Montgomery is the famous Canadian author of the well-loved series of Anne Of Green Gable books. These best-sellers feature a precocious redhead who loves books, has an impressive vocabulary and grew up on the east coast of Canada. The series is what made Montgomery a famous writer. This particular biography of Montgomery gives us an easy-to-read (it’s for pre-teens) summary of her entire life, from her birth in 1874 to her death in 1942. It includes an illustrated title page at the beginning of each chapter, and direct quotes from her extensive collection of personal diaries so we literally get snippets of her actual thoughts and feelings in particular moments of her life.

For those parents who are doubtful their 10-14 year old will find any interest in this topic, I see you, and I raise you this; House of Dreams is not just a biography, but a digestible yet detailed look at mental health, it’s power over us, and how it was dealt with (or more like avoided) back in the 20th century. Perhaps it’s well-known now, but Montgomery and her husband both suffered from severe depression, and it’s now thought that her husband was even bipolar. Both of them self-medicated to sometimes disastrous effect, and even though Montgomery enjoyed significant success in her later years, she struggled till her very end with this illness. As we know now, no one is immune to depression, not even the rich and famous. So although your kid may not be interested in Anne of Green Gables (shame on them!) you can still recommend this book because it does have a lot of relatable moments about growing up in it.

There’s lots of fascinating and light-hearted facts about Lucy Maud Montgomery as well. For instance, when she was young and living with her grandparents in Cavendish, Prince Edward Island, a cargo ship ran aground near their home and the captain stayed with them for a few weeks while the repairs were completed. The crew gathered at their house one night to get paid by the captain, and he paid them in gold sovereign coins! This particular instance is described so vividly, but it’s just one of many fun facts we learn about Montgomery. Apparently she would also autograph her books with the sketch of a black cat underneath her signature-I imagine this little tidbit is easier to confirm! One of her favourite quotes of mine:

A woman after mine own (and Smokey’s) heart! Time to pick up that Anne of Green Gables book after all.