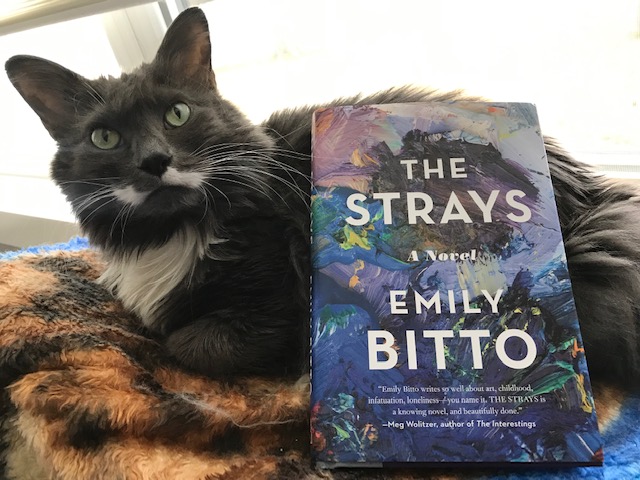 Last year, a book called The Italian Teacher by Tom Rachman was released, it was all about a famous artist and the people who circled around him. It also had a beautiful cover; a collage of vibrantly coloured paints splashed onto a canvas. Similar to that book, The Strays by Emily Bitto is about a young girl who gets caught up in the commune-like environment of a group of artists in the 1930s, all of them circling around a few famous painters in their midst. Fortunately, this is where the similarities end for these two worthwhile (!) novels.

The story is told from the perspective of Lily, an impressionable young girl living in Australia. At 8 years old she becomes friends with a girl named Eva whose father is the famous painter Evan Trentham. Eva’s mother Helena is a wealthy woman who put aside her own artistic ambitions to support and embrace her husband’s work, and they live in a rambling mansion that’s home to lots of crazy parties and avant-garde artists who clamour for attention from Evan. Eva has a younger sister Heloise, and an older sister Bea, and all three kids are generally ignored by their parents who are too busy with the other artists to focus on anything else. Lily quietly and gradually immerses herself into this world, and because Evan and Helena are so clueless as to what’s going on under their own roof, Lily easily becomes another member of the family, along with some young homeless artists who are desperate to just paint, sculpt, etc.

Can you see where this is going? Do things ever work out well when a group of young preteens with ready access to drugs and alcohol are ignored for extended periods of time? The answer is of course ‘no’. Evan and Helena have lots of money to go around, unfortunately they have no interest in being parents. Being the youngest, Heloise bears the brunt of the neglect because her older sisters don’t want to be caught hanging around their little kid sister, so she’s flat out ignored until the consequences come crashing down on everyone.

As Lily becomes older, she realizes she’s in the company of people who are making artistic history so she begins to keep a diary of what the artists are doing and saying around her. The novel itself is framed by Lily in adulthood, so we know she escapes this toxic environment relatively unharmed, but she is still emotionally tied to these turbulent years and the last few chapters of the book follow her as she attempts to come to terms with her memories. Like Lily, the reader is also scarred by what we experience in the Trentham house, and I was dying to reconnect and makes sense of what happened as the book came to a close. Each character is so vividly drawn that they’ve stayed with me for weeks afterwards, even selfish Helena who took such good care of the flowers in her garden yet allowed her children to go unnoticed for months at a time.

Neglectful parents are never something to laugh at (unless it’s Lucille Bluth), but there was one line that I laughed out loud at, although I doubt it was meant to funny. When Evan discovers Eva had been doing something she shouldn’t have (this is an understatement, but I don’t want to give away any spoilers), he says the following:

” ‘It is absolutely our business Eva,’said Evan. ‘You are my child. What are you, fourteen?’

This comes weeks after Heloise had to get a tooth pulled as she had neglected to brush her teeth for an entire year! Yikes.

So some unbelievable (yet engaging) characterization, coupled with subtle but well-paced plotting, The Strays is a rewarding read. I was swept up in the storyline that Lily drew for us, even though the parent in me was cringing the whole way through.