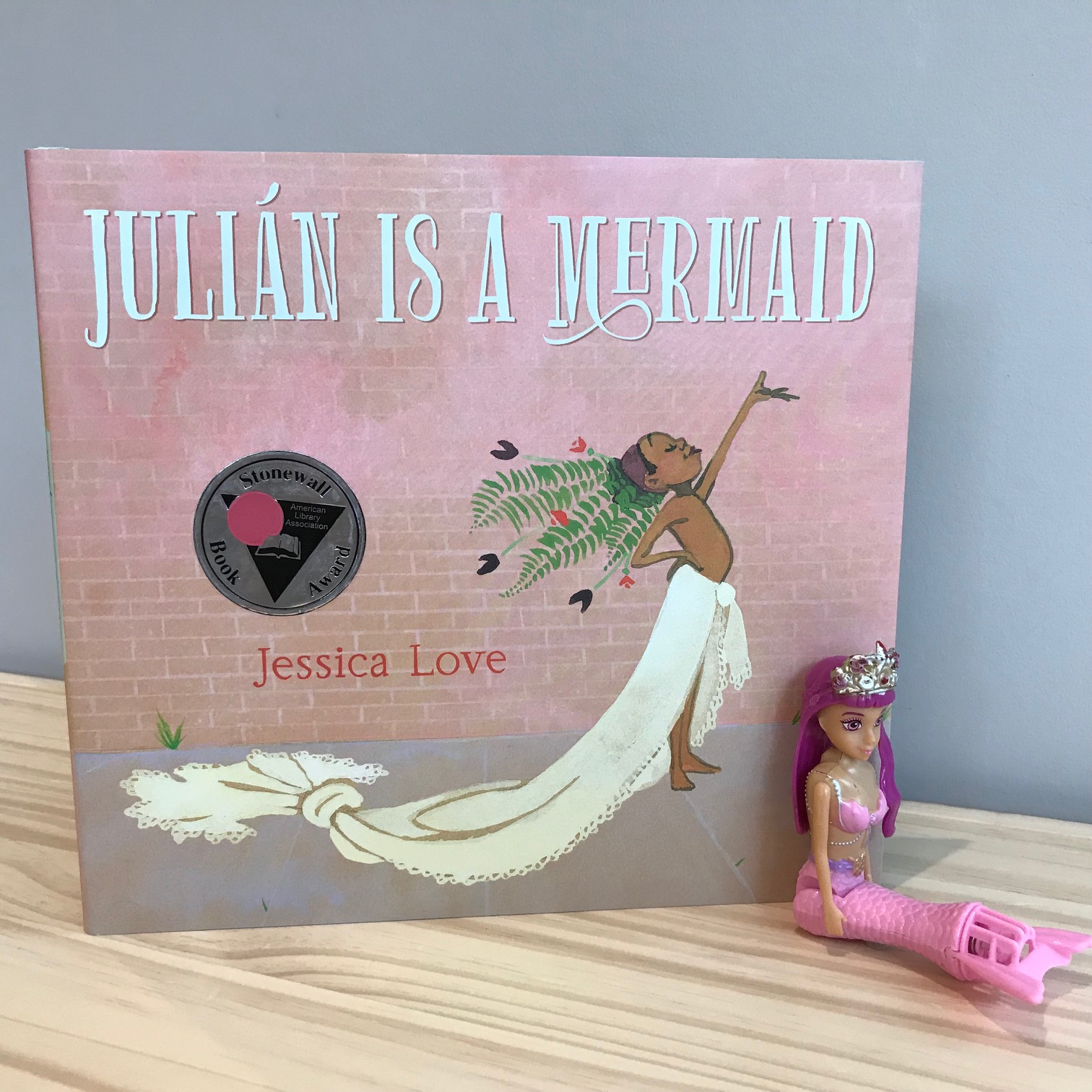 I love reading to my kids for various reasons, but what I’m most thankful for when it comes to picture books is the effortless way they can introduce a complicated concept that would feel strange just starting a random conversation about. Reading a book is an easy and accessible way to broach a subject with your children that you’ll struggle to explain otherwise, and it normalizes things for them when they see them in print, with fun accompanying illustrations. It’s for this reason that my favourite picture book is A Family is a Family is a Family by Sara O’Leary; it’s simple, non-judgmental and easily portrays all different family types one can expect and encounter these days. Along these same lines, the two picture books below introduce the topic of same-sex marriage and cross-dressing in an equally empathetic and entertaining package.

The Bravest Knight Who Ever Lived by Daniel Errico, illustrated by Shiloh Penfield is a riot of colours, so regardless of what the text says, my daughter loves this book simply because the pages are chock-full of bold, fun imagery. We meet Cedric, a pumpkin farmer turned knight who continues to eat all things pumpkin as he rides his horse in search of adventure. After saving a royal brother and sister from a fire-breathing dragon (using pumpkins as artillery AND armour no less) the King and Queen are more than excited to offer their daughter’s hand in marriage as a gift for his good deeds. However, Cedric has fallen in love with the prince instead, and once the prince confirms he feels the same way, the King puzzles over it for a page and then decides his son’s happiness is more important than his temporary confusion and surprise.

So apparently I’m not the only one who loved this book, because it was hugely popular and made into a cartoon. Clearly it’s resonating with people, and I believe it’s because of the very clever way it has upended the traditional fairy-tale trope to something that more of us can relate to. Cedric isn’t brave because he successfully fights a dragon, he’s brave because he expresses his true emotions and wishes, even though he’s afraid of how others will react. Even when Cedric was young and playing knights and dragons with his friends, everyone assumed the prize at the end was a woman-a princess to fall in love with. Aside from the problematic way a woman is treated as a prize, Cedric would simply respond “This isn’t how it ends”. And as Cedric gets older, HE decides how it ends, instead of society and their expectations. I know some readers may be rolling their eyes here, but these subtle expressions in children’s books sets up one’s idea of what’s normal and what isn’t, so the more we can introduce independent thinking at a young age, the better off our kids will be. It’s no Gillette commercial, but it’s an indirect effort in breeding empathy in our children.

Lastly we have Julian is a Mermaid by Jessica Love (pictured at the top of the post) which is a whimsical introduction to dressing oneself based on emotion and spirit, rather than gender. Told in very few words, we meet a young boy Julian who’s riding the subway with his abuela (grandmother). There, they see some women, (potentially women in drag but this is never completely obvious) who are dressed as mermaids with long shimmery gowns, lots of makeup and golden earrings that swing with their long hair. Julian is entranced by them, and while he’s home with his abuela later that day, he decides to dress up like a mermaid too, complete with wig, makeup, and drapes styled like a mermaid’s tail. Julian is afraid of what his abuela will say when she discovers what he’s done, but instead, she brings him to (what appears to be) a Pride parade of sorts, inviting him to walk with people “Like you, mijo”.

This story is subtle, and can be interpreted in a few different ways. Is Julian afraid his grandmother will be upset because he’s dressing like a girl, or is he afraid his grandmother will be upset because he’s taken down her drapes and used her lipstick? Julian is also quite young, and instead of making a statement about him ‘choosing’ to be one gender over the other, it’s simply encouraging experimentation and open-mindedness, so there’s not much to get the conservative fires raging. More importantly this book promotes inclusivity and following one’s heart, and the small gesture of the abuela giving Julian her necklace to complete his outfit is a touching one. Especially because she is of the generation that are not typically shown as tolerant or understanding of people’s differences, regardless of how accurate this actually is.

So three books that will start some conversations with your kids, and these conversations don’t have to be long or complicated. In my five years of being a parent, I’ve found my kids don’t question these things at all. Boys marrying boys? Sure. Boys dressing up as men? Sure. Kids with two moms? Why not? It’s only us adults that make things harder than they need to be, so let’s let the kids and their picture books take the lead on this one.