Ivereadthis Jr. Edition: Something for Everyone 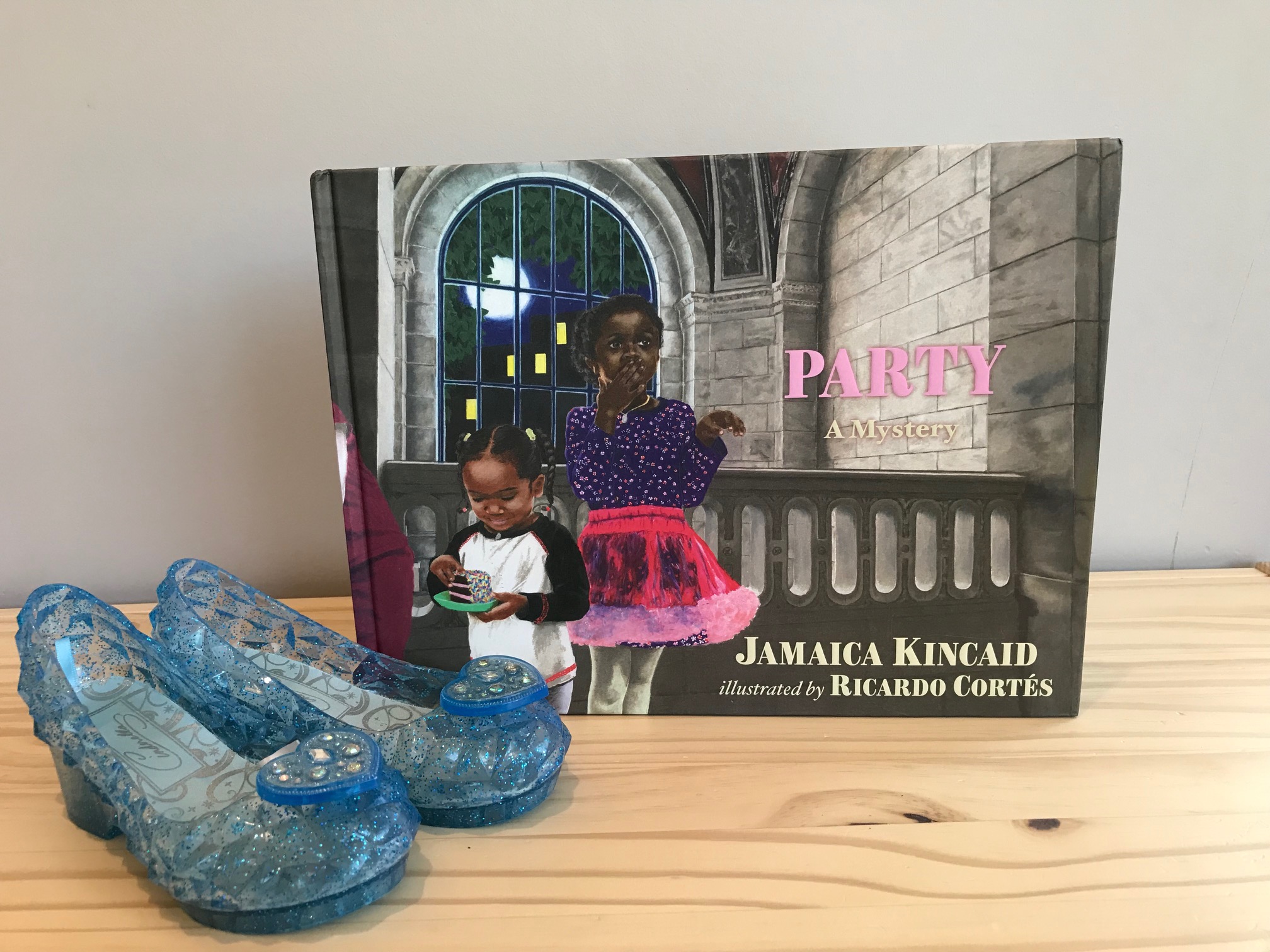 I’ve got a bunch of kids books that are waiting for review, so here’s a random assortment of ones I haven’t gotten to for awhile, but my children have been reading and enjoying for more than a few months.

When this book was promoted as a mystery for kids, I was excited. “Finally-a picture book that introduces the concept of a mystery to young children! This will plant the seeds of love for this genre nice and early, so we can enjoy reading mysteries together as my kids age!” I optimistically thought. Alas, it was not to be. Perhaps this is because age five is simply too young to understand the extended puzzle that is a mystery, but I read the book Party, A Mystery to my oldest and she was underwhelmed, as was I. The story is written by celebrated author Jamaica Kincaid, who actually wrote this decades ago, in 1980 as a short story. Richard Cortes, another well-known artist illustrated this book, and it’s his pictures alone that lift this book up onto a platform worth talking about.

Party is a clever little story, one I would delight in reading within a collection. However on its own, especially as the basis of a kids book, it doesn’t make much sense. Essentially it’s about a group of three young girls attending a party celebrating Nancy Drew mystery books, who see something “vile” and “bilious”, and go to check it out, and it’s gone. The mystery of what they saw is never revealed to us. We know they saw something that upset them, but we never figure out what. The illustrations hint at something (perhaps a cake on the dessert table?) but there’s no answer, and the story ends directly after that, the youngest girl lamenting that no one tells her anything. Clearly, the reader is meant to relate to this little girl’s complaints, and that we certainly do!

Aside from the frustration of never knowing what they were talking about, the book itself seems pointless because there’s nothing else really going on. Plus, the writing is meant for adults as you can tell by the adjectives chosen above, so this book is completely unreachable for young kids, and it doesn’t contain enough text to keep older kids interested. But as a quirky coffee table book for adults with a unique backstory, it works.

Next we have Hangry by Drew Brockington, which as the title suggests, is relatable to both kids and adults alike. We’ve all been there, hungry and angry about it, and even though my daughter hadn’t heard me use the term ‘hangry’ before, she immediately understood what it meant because OF COURSE SHE DID, SHE’S A KID. It’s the story of a big green Godzilla-like monster who gets upset because the hot dog he’s about to eat from a street vendor is stolen by a swooping pigeon, so he flies into a rage, scaring all the citizens of his town into finding the pigeon and punishing him for his grave mistake. After a few pages of tantrums, the hot dog vendor calmly points that he has lots of hot dogs, and can easily just get the monster another one. I love this book because it doesn’t focus on how much being hangry sucks, instead, it points out the ridiculousness of being hangry in the first place, at least for people in a first world country. Why do we get hangry when we know there’s plenty of food available for us? Instead of getting mad about something, we should just focus on finding the solution. I will, of course, try to keep this in mind next time I get hangry.

The pictures in this one are what make my daughter laugh-the monster isn’t scary at all (I promise! my daughter gets scared of a lot of strange things right now, but this monster is funny-looking, probably because he has no neck) and the confused and terrified expressions of the little people around him are also delightful. She also laughed at the fact that the hot dog vendor (god bless him) refers to the monster as ‘bud’, which adds a comical lightness to the potentially scary situation.

Sloth to the Rescue by local author Leanne Shirtliffe, illustrated by Rob McClurkan is a cute little tale about a sloth who tries to the best of his ability to help a friend out. Sloth lives at a rainforest rescue center, and his friend Patti comes to visit him often, drawing in her book while she sits and enjoys his company. One day Sloth realizes Patti left her book behind, so he decides he will return it to her. Unfortunately, Sloth is very slow, and he sometimes gets anxious, but he’s not afraid to ask his other (animal) friends for help. Together they go on a field trip to Patti’s school to return the notebook, which they eventually do, because it turns out Patti is slow too (she dawdles) so she’s not difficult to track down.

The sloth character is adorable, and not just because he’s a sloth. It takes him awhile to do things, which is a trait most parents will attribute to their young children. Many of sloth’s sentences are written with a period after each word, not only highlighting how slowly he does things, but forcing the reader to physically slow down as they read the words out loud (“Today. is. Patti’s. first. day. of. school.”) For a parent like me that races through books, I appreciated this reminder to slow down and relax, just like the sloth does. My daughter liked how slowly I read these parts too, she thought it was funny how closely I was imitating the sloth.

What I love about this book is the celebration of difference, and the lesson that asking for help is a positive thing. Sloth can’t get anywhere quickly, so he asks his friends for help, building on their strengths which ensures their success as a team. And when the team begins to get anxious (because it’s the first day of school) Sloth reminds everyone to take a few deep breaths, because he’s good at relaxing. Similar to Shirtliffe’s last book I Love Sharks, Too! this one ends with a few simple and easily remembered facts about the animals featured, which surprisingly, tends to be my daughter’s favourite part of the whole book.