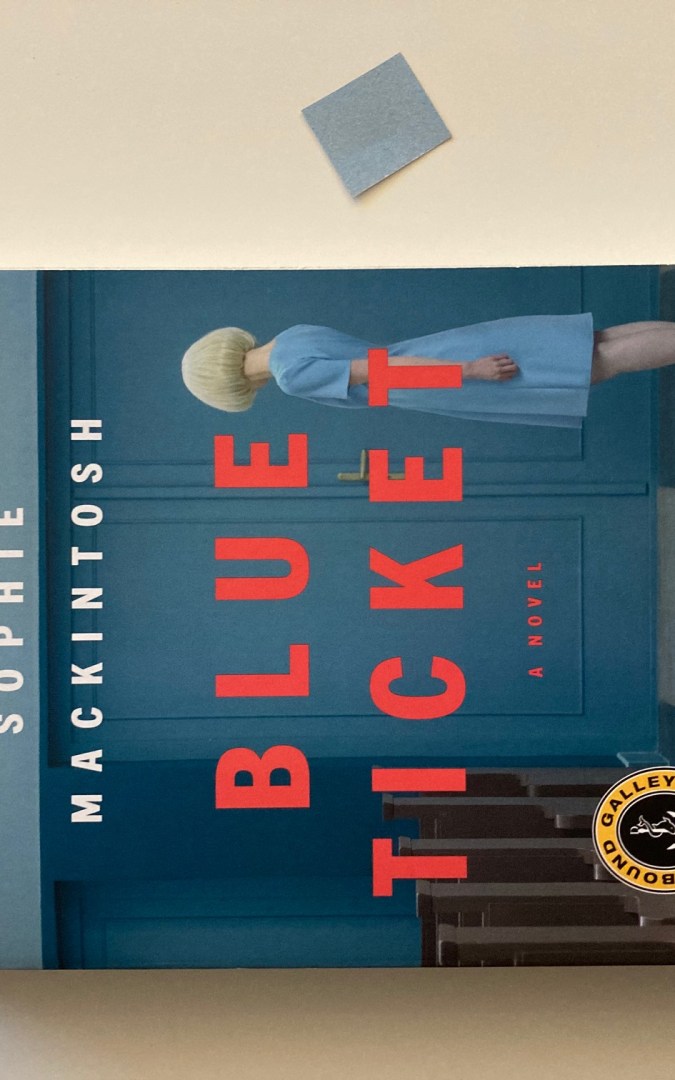 Motherhood is such a hot topic in fiction these days, and why shouldn’t it be? There are lots of feelings and events to muddle through in this time of life, and like parenting in general, the capacity and opportunity for trauma is endless (LOL). One aspect that seems ripe for endless debate is the decision to have children in the first place. I think most would agree that simply having the option of becoming parents is a privilege that many people in the world don’t have, whether that’s due to lack of education, birth control, the physical ability or simply circumstance. Blue Ticket by Sophie Mackintosh is a dystopian novel that examines a society in which the decision to have children is taken out of women’s hands. For some, this may seem like an interesting premise that suggests many problems of the world could be eliminated, but it doesn’t take a ton of pages to see the inherent horror in a world such as this. Although I found the book alarming, I was completely absorbed by it, and fans of Margaret Atwood’s Handmaid’s Tale will no doubt want to reach for this one as well.

Calla grows up in a world different to ours. In her world, when women get their first period, they are dropped off at a ceremony by their parents where they choose a little ticket from a machine, and each ticket is either blue or white. A blue ticket means you are going to have birth control forcefully inserted in your body for the rest of your life, basically a permanent IUD. A white ticket means you are going to have children. And it’s unclear how or why the next part happens, but essentially each blue ticket girl is released into the wild with a small package of supplies, and forced to travel alone, for potentially weeks, until she reaches a city. If she successfully reaches that city, she is given a job and can set up her life there. Girls who don’t reach a city just…die? Not sure. Every woman is monitored closely by a doctor who also acts as a psychologist and spy for the government.

Calla draws a blue ticket, and after successfully reaching a city and working in a lab for years, she realizes she is bored with her life, and does in fact want a child, despite her ticket’s colour. She removes the IUD herself and gets pregnant. Once her doctor realizes what she’s done, she is banished from the city and given a ‘head start’ from the authorities who are apparently going to capture her and harm her, and potentially the baby for breaking the rules. Calla meets other women who have broken the rules and together they set up a desperate little commune, but time is running out for them, for many obvious reasons.

Like many dystopian novels, we don’t know the full story of how this society came to be, or the exact details of what life is like there. Many things are left open-ended, including what happens to the women who get a white ticket but aren’t able to conceive. Are they paired with men, regardless of their sexual orientation or preferences? We only get Calla’s perspective, so we only know what it’s like to be a ‘blue ticket woman’, but we do know that both white and blue ticket women are unhappy as we meet a few white ticket women who were also attempting to change fate. I don’t understand the significance of making girls fight their way to cities either, but what’s clear is the general disdain for female autonomy. Women are controlled and manipulated by the very thing that makes them unique; their ability to birth new life. It’s difficult to discern whether this is taking place in the future, or a parallel universe to ours, but in the end it doesn’t matter. Blue Ticket demonstrates the even darker consequences of women not having control over their own bodies. Women are deemed unfit mothers before they even reach adulthood, yet this is presented as an act of fairness. Instead of giving one person, or a committee of people, or even a set of laws the power to deem someone an unsuitable parent, the choice is somehow pre-ordained or completely random, we never know.

Calla is a difficult character to relate to. In many ways she’s more animal than human as she is so used to being hunted or chased away. As a mother, I found Calla’s blind naivety about having children sort of frustrating, but in her world, she isn’t exposed to motherhood, or the true difficulties of bearing children. Blue ticket woman have no understanding of pregnancy, how long it is, how the baby comes out, and how to feed babies afterwards. I often found myself wondering if Calla would still want to be a mother if she knew the full extent of her decision to bear a child. Towards the very end of the book she meets a white ticket woman who is tending to her own baby, and admits to Calla how she struggles:

“You’ll watch the baby every second of the day. You’ll be convinced they’re dying. You’ll hold them to your body and weep. Sometimes you will think of killing them yourself” (p. 240 of ARC).

This is a pivotal scene in the book because it proves how unhappy every woman is when they are not given a choice, when they live in a subservient position to men no matter their disposition or preference. Every dystopian novel is an exaggeration of a current problem in our society, and Blue Ticket is no different. Choice is a freedom we must fight for, for every member of our society. At its most basic, the choice over what happens to our own bodies is something we must continue to uphold, and in some cases still secure, for women everywhere.