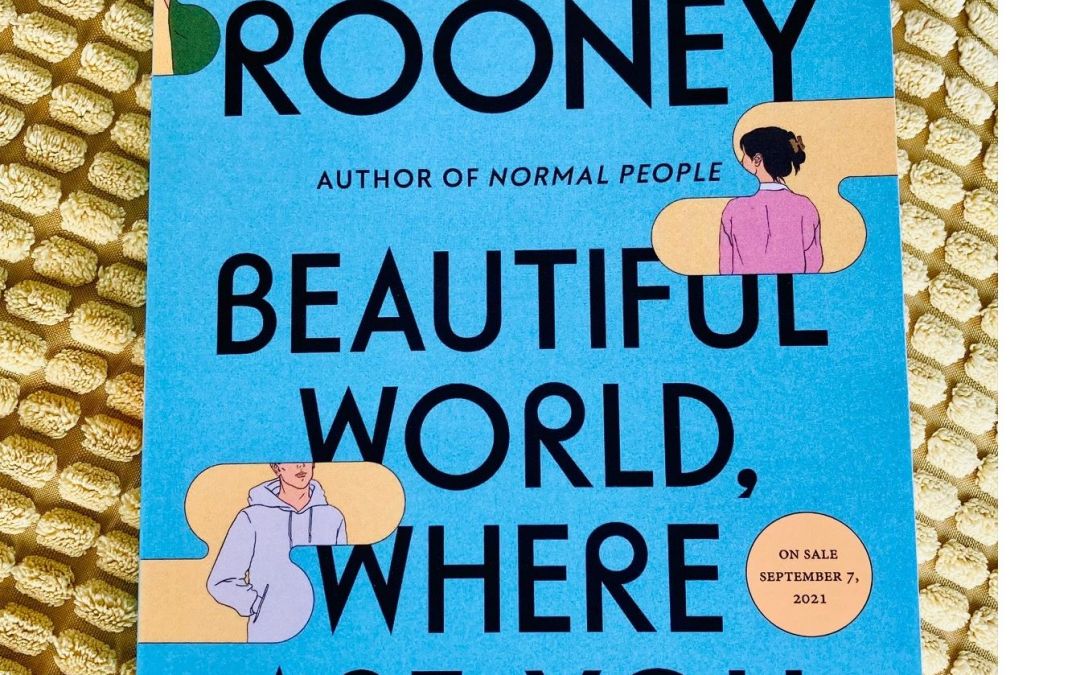 Do you see what I did there? For anyone who has read a Sally Rooney novel, you’ll know how sex plays a role in her writing, which is a fact I’ve most recently become aware of since I read all three of her books. Her publisher contacted me and asked if I’d like to see her latest; I replied with an enthusiastic ‘yes’, although I admitted somewhat sheepishly that I had never read any of her books, and I wanted to right that wrong. Penguin Random House very kindly send me all three of her books so I could get the full Rooney experience, and I read them back-to-back so I’d immerse myself fully in this writer over a few weeks. I’ve never read an author’s full library back-to-back, but it certainly gave me a clear indication of the kind of writer Rooney is, and why she’s so popular, especially with young women.

Her first book Conversations with Friends was released in 2017, detailing the complicated relationship between two young women in their twenties, (seemingly the only age group Rooney truly feels comfortable writing about) who are both friends, and lovers. Frances and Bobbi meet a couple in their thirties, a mildly famous husband and wife who immediately show an interest in both women. Frances eventually strikes up an affair with the husband, a handsome actor who acts somewhat fearful of his wife, and Bobbi and France’s relationship reluctantly shifts to accommodate this interloper.

Like each of Rooney’s books, this novel is very insular, focusing on what happens between these four people, their lives outside of the relationships more like background noise to the very intense feelings they have about and for each other. We think we know what’s going to happen when we read about an affair between an older man and younger woman (although to be honest, I have trouble referring to Nick as older, as he is only 32, but in Rooney’s world he’s practically ancient) but this book does not run a likely course. Instead, the intricacies of human interactions are laid bare to such a shocking degree that it’s impossible to really predict anything. Each character is developed so fully that I felt as though it would be unfair to slot them into a particular category, they were so infused with reality that I stopped thinking of them as characters, and more as people I just hadn’t met yet in real life. It was a fantastic introduction to Rooney’s writing, leaving me excited for the next group of people I was sure to be impressed by in her sophomore novel.

I think it would be oversimplifying things to say I liked Normal People more than her debut novel because it’s her second novel, and she’s clearly progressing and growing as a writer. This novel shrinks its focuses to two people and their relationship with each other; Marianne and Connell, both kids in their twenties, both obsessed with each other, but lacking the will, self awareness or proper skills to communicate this to each other. We follow them in the last few years of high school, and their first few years of college as they circle around one another, falling in and out of a romantic relationship, but always bonded and in each other’s orbit.

Now that I’ve read the book and become tangled in Marianne and Connell’s (often strange) interior thoughts, I’m desperate to watch the miniseries. And this is really something incredible, considering I go weeks without watching any movies or television, that I’m motivated enough to watch this. The complicated web of their relationship and friendship, their inability to keep away from each other is just so appealing to read about, it gives notion to this widely-held belief that some people are just meant to be together. Their time together isn’t over-romanticized either though, they treat each other badly at times, and Rooney’s obsession with people in their twenties means she nails their dialogue and habits. I couldn’t personally relate to them, being a mother in my thirties, but T still enjoyed reading about them. Once again, I finished this book feeling incredibly old, but not in a bad way. I was more relieved that I had passed through this tumultuous time relatively unscathed, unlikely Rooney’s characters.

Beautiful World, Where Are You

Unless you’ve been living on another book-less planet, you’ve probably come across the worldwide hype for Rooney’s latest book Beautiful World, Where are You which went on sale September 7. I finished reading it on exactly the day of its release, which made me feel extra special because early access is one of the few perks I experience as a book blogger. Anyway, I’m glad I read all her books in a row because it really highlighted her growth as a writer. Once again this novel centers on relationships between young people, but these people are slightly older than her other characters, they are on the cusp of their thirties (still younger than me, but who’s counting?)

It’s about four people, two men and two women, each falling in and out of love with each other. Interestingly, this book features a character that one cannot help but assume shares many qualities with Rooney herself – “Alice” is a young female author that struck it big with her first novel, and has now sold millions of copies of her books however she is uncomfortable with her fame and newfound wealth. Years before she suffered a breakdown and was admitted to hospital for a few months, and is now on the road to recovery, but still struggles in her own quiet way. Her best friend Eileen, Eileen’s old crush Simon, and Alice’s new love interest Felix all move around each other, sometimes with grace, more often than not with awkwardness. Alice and Eileen’s perspectives are dotted with their correspondence to each other, which tend to be long blocks of philosophical text, describing historical periods they’ve read about on Wikipedia, or their personal annoyances with family, or society.

This latest novel felt like her other two books, but a little more fleshed out, with more care taken around all the other things that surround her characters (setting, description, dialogue). As with her other stories, this was essentially plotless, the growth and development of the characters the only real shift I noticed as a reader. Still, I couldn’t help but be captured by these people, their witty jokes, their realistic dialogue, the discomfort they all work through as they come to understand themselves better.

Rooney’s books aren’t for everyone, there’s a particular age group that will enjoy her writing, and I’m probably on the verge of aging out of it as I round the bases to 37. Still, I’m assuming she writes for whatever age she is, and as she gets older, so will her characters, and as she matures, the situations will too. This isn’t a complaint about her work, it’s simply a fact that anyone who is considering reading her should be aware of. And it’s obvious she’s captured the imagination of a particular group of readers, her stellar sales are indicative of that, and with good reason. Her depictions of friendship, romantic love, and the complications around those are undeniably fantastic, and I’m excited to read whatever she comes out with next, even if I’m a decade older than the people she’s writing about.