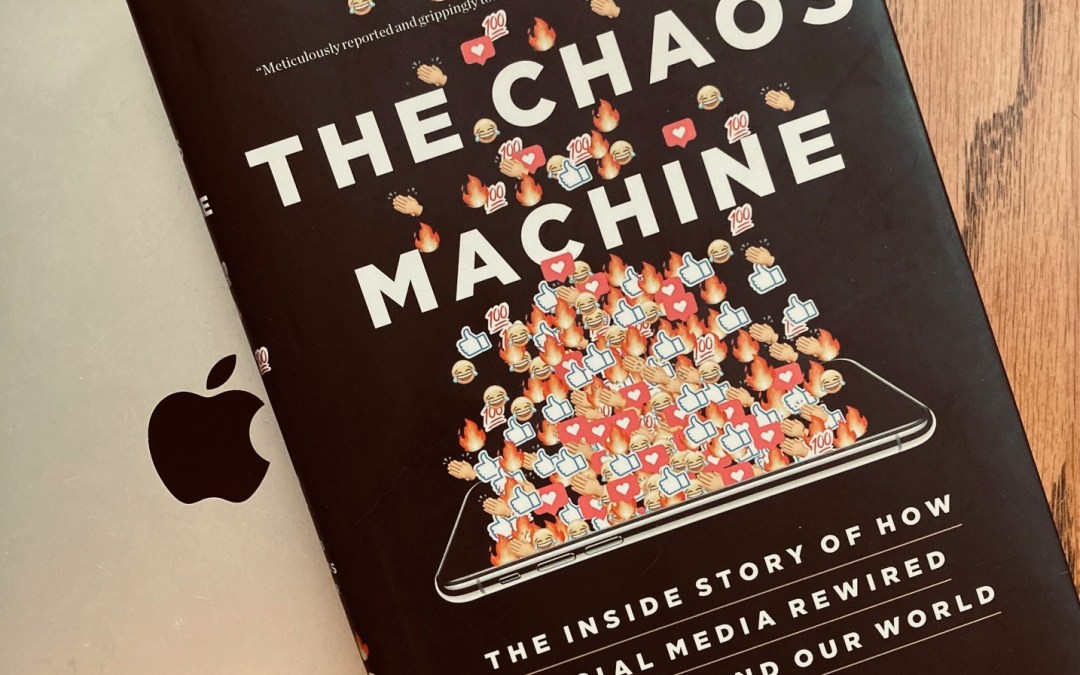 We all know social media platforms aren’t good for us. Low self-esteem, fear of missing out, general depression and envy are some of the more common side effects that most people experience and are aware of when it comes to their participation on these sites. But The Chaos Machine by Max Fisher takes this knowledge further by examining the algorithms used by Silicon Valley through these platforms and their harmful affects on society. Although I found this book fascinating, I also found it disturbing, so I tried to get through it as quickly as possible so I could pick up something a little less upsetting for my bedtime reading.

Max Fisher is an investigative reporter for The New York Times learning about the inner workings on the corporate giants Google (which owns YouTube), Facebook, and to a lesser extent, Twitter. As a well-respected journalist, he has access to many reputable sources, including lots of ex-employees of these companies. Through interviews, Fisher reports on those employees who realized the algorithms that were created to increase engagement were also radicalizing people, recommending other videos, groups and articles that take a polarized approach to whatever topic people began to show interest in. The tendency of humans to show interest in more emotionally stirring pieces of content is exploited by the artificial intelligence of these algorithms, which increases the spread of misinformation, eventually leading to some radical and violent action. Fisher explores the idea of free speech as a wall that Silicon Valley hides behind, reluctant to take down inflammatory posts because it continues to drive views and advertising dollars. The power and influence of these companies are even more widespread in third world countries where news is scarcely available, in some places only coming through apps like Facebook. At a minimum these issues lead to isolated groups of people, and at worst, it has led to genocide, all claims that Fisher substantiates through his research.

I began reading this book with the understanding that I wasn’t going to ‘like’ what I read. I know social media is bad for me, I have a general understanding that it contains algorithms to keep me scrolling, but I believe I have enough self-control that I can easily stop when I recognize it becomes harmful. I went so far as to remove Twitter from my phone a few months ago, and I am much happier now – less aware of the news mind you, but happier. But when Fisher takes the harmful affects of social media and extends his argument into the second and third world countries, where the population rarely has access to a computer, this is when I learned things that truly shocked me. I won’t do it justice by even trying to offer a summary, but the way Fisher reports how Facebook entered Myanmar and essentially brought them the internet, still surprises me – I didn’t think a corporation would have the allowances to work so closely with a government like this on critical infrastructure, especially a newly installed one. Ex-employees of Facebook admit to having their blood on their hands, and although it may sound like hyperbole, I agree with them after having read this book.

Fisher’s writing seamlessly weaves in quotes from experts, revelant research, and his own beliefs. There is a significant section of endnotes at the back, rather than the pesky footnotes that interrupt the flow of writing. He convincingly argues that the problems with social media stem from Silicon Valley and its subversive culture. Sites like Facebook, 4chan and Reddit were created with the goal of connecting people in ways they never have been before, unleashing the power of free speech and giving everyone a platform. But when the success of these mediums depend on time spent on them, it leads to abuse of power, and shutting down heavy users or content that drives up views is counterintuitive to a corporation – if it’s making money, everyone is (or should be) happy. Fisher’s background information on the beginnings of Silicon Valley is quick but thorough, just enough to make the reader feel informed, but not overwhelmed. Despite a few points that feel repetitive, the book is overall quite easy to read, I was pleasantly surprised by how accessible he made the topic that could have easily gotten bogged down in the wrong hands.

I picked up this book because I’m going to recommend it on my next radio segment as a good gift idea for those hard-to-buy people on your list (i.e. older men). However I can think of so many people in my life who would find this book interesting, or who could benefit from reading it and understanding the forces behind the content they consume. Still, it should come with a warning – you can’t unlearn these things once you are exposed to them, but if that results in less people connecting on social media and back in person instead, I think that’s better for our society as a whole.