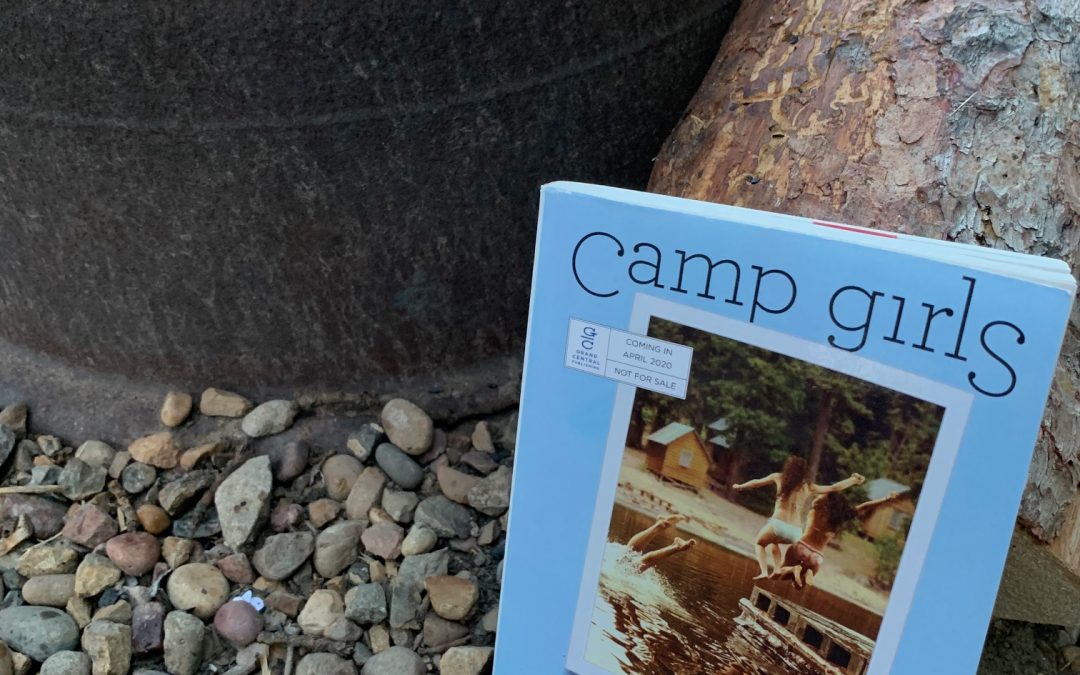 Did you go to summer camp when you were a kid? Does the thought of summer drum up memories of lakes, pine trees, and lazy canoe rides as the sun sets? I was lucky enough to head up north each summer to my family cottage when I was a kid, and because my Mom was a teacher, we were able to stay up there for the full two months. It wasn’t until I got older that I realized what a privilege this was, and I’m so grateful this property is still in my family today (although I won’t be able to visit it this summer because of *gestures wildly at everything*). Anyway, absence makes the heart grow fonder, and I figured that reading a book about the joys of summer camp would be a small consolation for not actually paddling a canoe or getting to swim in a lake. Camp Girls, Fireside Lessons on Friendship, Courage, and Loyalty by Iris Krasnow did scratch that itch for me, but this won’t be a book that will have broad appeal because it speaks to a very specific audience.

Iris Krasnow is a journalist and self-professed ‘camp girl’. She tells the story of going away to camp for the very first time at the age of eight, for a full eight weeks with her older sister who was only nine at the time. It was 1963, and they were travelling to Camp Agawak in Minocqua, Wisconsin. She was nervous to leave her parents, but loved the camp once she got there, and continued to attend well into her teens, eventually becoming a counselor, and then sending her sons to a summer camp when they were old enough. She goes back to work at these summer camps when her boys are in attendance, and again, in her late fifties she returns to camp Agawak to once again work on their weekly paper Agalog. In between her own recounting of camp experiences, she interviews people who credit their adult successes to their time at summer camp, drawing from lessons they learned as children that helped them in their ‘real life’ in the future.

Krasnow has a talent for immersive writing; the sights and sounds of the lake came through loud and clear in her recollections, and she was quick to remind us that campers are outdoors no matter what the weather. She recalls the wet and dreary days just as often as the hot and sunny ones, so her childhood accounts never feel glossed over or unrealistic. And while the majority of her stories and life lessons from camp are positive ones, she does interview one woman who admitted to having a severe eating disorder made worse by being at camp in a bathing suit all day. I was grateful to read about the changes that modern-day camps are implementing to help support the changing mental health needs of young women, and Krasnow admits that during her childhood, emotional issues weren’t dealt with properly so these adjustments are badly needed.

Now I’ve only been a parent for short 5-ish years (although, let’s be honest, it feels MUCH longer), but the idea of sending an 8-year-old away for a full two months is a bit shocking to me. I have no doubt that it would make my children more independent, but I can’t imagine it’s very common these days. I personally went away to summer camp for 1 week as a kid, and I remember being terribly homesick, so Krasnow is one tough cookie to have jumped into that challenge headfirst. She admits that her mother cried every time they left for the summer, and during the parents weekend visit they were overjoyed to be reunited, so they were obviously close as a family, but I’m still not sure I could do it myself. Still, the skills Krasnow learned as a camper are undeniable, and reading this book has made me seriously consider sending my kids to sleep away camp when they get older. Spending time in nature is never a bad thing and the social experiences one gains from being surrounded by your peers for that extended period of time is no doubt beneficial.

This may be painfully obvious to most who read this review, but I’ll point it out anyway; this book has a very select, privileged audience, which begs the question, who is she writing this for? Other people who have gone to camp and love reminiscing about it? Nervous parents like me who want their kid to go to summer camp but aren’t sure if they can handle it? Not many people can afford summer camp for their kids, and yes, Krasnow points out that there are scholarships, but that doesn’t change the fact that many will never get this opportunity because it’s out of most people’s price range. So although I rarely find myself asking this question, I will ask it of this book; what is the point of it? It’s well-written and makes some interesting points, but it could have also been effective as a long magazine article too.

Let me know if you went to summer camp in the comments!