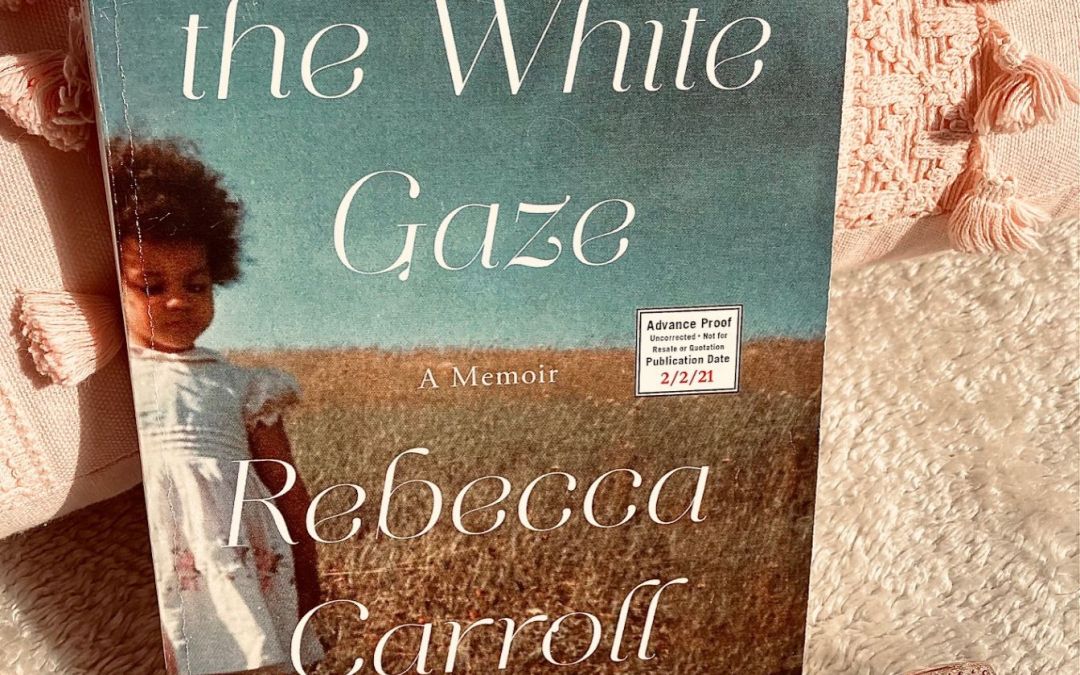 When I realized my reading last year was #sowhite, especially considering I’m reading all books published within the last few years, I’ve been making a concerted effort to read with diversity in mind, and it has been a rewarding experience. Surviving the White Gaze by Rebecca Carroll is a memoir about growing up half black, with two adoptive white parents. I approached reading this book with the expectation and knowledge that I wouldn’t be able to relate strongly to the experiences, but I wanted to know more about them, and try to learn from them. My most surprising revelation was just how much easier it is to grow up around those that look like you, which is something most of us have the privilege of taking for granted. Carroll is a celebrated writer, essayist and critic, but her road to a successful adulthood and motherhood of her own is marked with notable challenges and successes that are deeply analyzed in detail in this book.

Carroll was adopted as a baby, growing up in a predominantly white, rural New Hampshire town. Her parents are loving, peaceful and artistic – they believed in zero population growth, and a friend of theirs had a baby she couldn’t keep, so they adopted her, giving a safe and happy home in the process. Still, Carroll felt isolated in the sense that she didn’t know a single other black person, and had no connection to her ‘blackness’ in any sense of the word. Pinballing between her desire to inhabit the body and skin she was given, but also wanting to fit in at school and at home, Carroll struggled with what being black really meant. She eventually meets her birth mother Tess, a white woman who had a brief affair with a black man which resulted in Carroll being born. Tess is cruel in many ways, forcing her bizarre opinions onto her birth daughter, including the fact that she should never identify as black and that race is a societal construct only. Although the author and Tess become involved in one another’s lives, and Carroll acts as a stable and loving older step-sister to Tess’s two sons, there remains a push and pull between the two woman; their complicated history making it difficult to ignore one another, but never quite achieving a healthy relationship.

This book will no doubt challenge people as it did me. Even though Rebecca grew up in a stable home, there is a big part of her childhood missing, as well as any influence of black culture, celebration or even acknowledgement. When she is 6 year old, she meets the first black person she has ever seen in real life – a ballet teacher, who was recommended to Rebecca’s mother because she was black and people assumed it would be good for Rebecca to learn from her. Once Rebecca’s mother enrolls her in this class, Carroll states that “after Mom’s initial comment about Mrs. Rowland being Black, the issue never came up again. As if a box had been checked and Mom’s work had been done (p. 35 of ARC). It isn’t until years later that she sees another black person, and she quickly realizes that if she shows too much interest in other black kids, her white friends will judge and tease her, so in order to protect her social standing she tries to hide any ‘blackness’ that she may show. At the time of writing this, Carroll herself has been a mother for over a decade so she understands the challenges of being a parent, yet I couldn’t help but feel she was being unnecessarily harsh to her adoptive mother.

As I read, I often reminded myself that I was reading this particular book through my own lens of white privilege, which colours everything I read and interpret. I’ve never felt like an outsider, because I’ve always been surrounded by people that looked like me, including my birth family, so the majority of her experiences I could not relate to. Instead, I found myself pinballing between feelings of defensiveness (white people just may not notice these things), pity (her parents should have tried to figure out how to do black hair properly instead of just ignoring it), anger (her parents were so ignorant and passive they didn’t notice Rebecca was being molested by one of their friends) and shock (her birth mother claimed all black men are dogs and knock up multiple women).

Although she takes issue with much of what her parents didn’t say or do with her growing up, she recognizes her love for them, especially compared to her birth mother, whose love felt conditional and fragile. This is most obvious when she gets into an accident in her early twenties; her mother’s reaction to it is immediate concern, while her birth mother’s reaction to it is anger, scolding Carroll before she even knows if she’s ok.

Carroll’s life was not made any easier by the fact that she also grew up quite poor, and this issue of class is most obvious when something devastating is revealed about her white sister. Their parents’ reaction to it is horrific, which made me question my initial pity for them. This class discrepancy is something Carroll becomes more aware of as she ages (as any high schooler does), forcing her to work even harder to fit in with the rich, white friends she has. Nothing comes easily to Carroll, but I appreciated reading this memoir because it offers a perspective that I wouldn’t get elsewhere, forcing me to examine my own assumptions and biases.