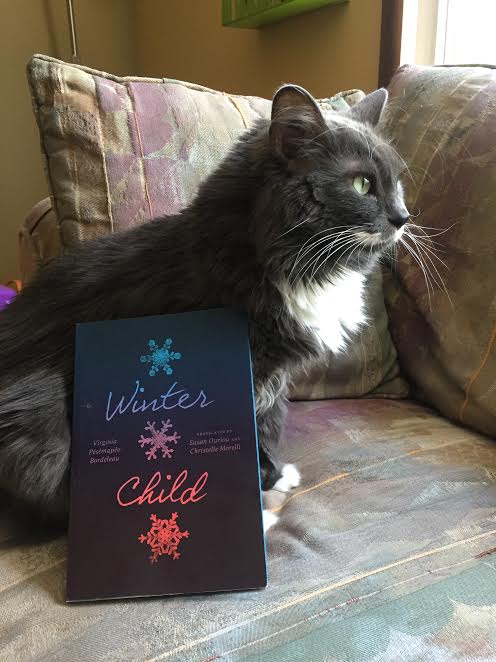 Writing a review about a book that describes a child dying is always a difficult task, especially for a parent that always thinks the worst (I have an overactive imagination!), but I’m trying to choose my words carefully because I don’t want you to be scared off. It doesn’t help that it’s a translation, and written in very poetic language that’s sometimes difficult to follow, so Winter Child has a lot going against it, as these are all traits that typically prevent a book from selling, rather than the opposite. But stick with me, this is worth it, and I’ll tell you why.

One reason that I was eager to read this book was because one of the translators is Albertan Susan Ouriou, (the other translator is Christelle Morelli) who has done extensive work in her field, and is incredibly talented and intelligent. The things she accomplishes leaves me in awe, and she’s a true artist in every sense of the word. Winter Child is also published by Calgary publisher Freehand Books, and as you know, reading local is something I take very seriously so I really had no choice, I had to read this.

Despite my weariness of the subject, I was really absorbed by this story. The writing is stunning, it reads more like an extended poem than a short novel, so it was easy to dive in and out of, or for those feeling more ambitious, an entire read through in one go. It’s also written from the perspective of an Indigenous woman, and with Canada Day just behind us, it seemed like an appropriate way to honour our Aboriginal population. In my bookish opinion, listening to and reading about their perspectives is one of the most useful ways we can understand this misunderstood group of Canadians.  But what makes this book even more “Canadian” is the fact that the protagonist is also deeply embedded in a Francophone community, in fact her son calls her ‘maman’, so we are exposed to many different cultural influences in this story.

As a small mercy, we know the child is going to die before it happens, it’s introduced quite early on in the novel. Plus, the child is really a young man when it happens, which also made it easier on this reader (although god knows why, it’s still horrific). Anyway, the book isn’t so much about the death of the child, but the rebirth of the mother. Along with the death of winter, she loses a piece of herself when her son passes, and it isn’t until she accepts love back into her life, and escapes the snow, that the rebirth of spring returns her to the land of the living. So it’s not all doom and gloom, there is a light at the end of this tunnel.

Just to recap: the story isn’t  depressing, it’s beautifully written and it’s the perfect way to learn more about the people in this great country of ours. The reasons to read this book far outweigh the reasons not to.