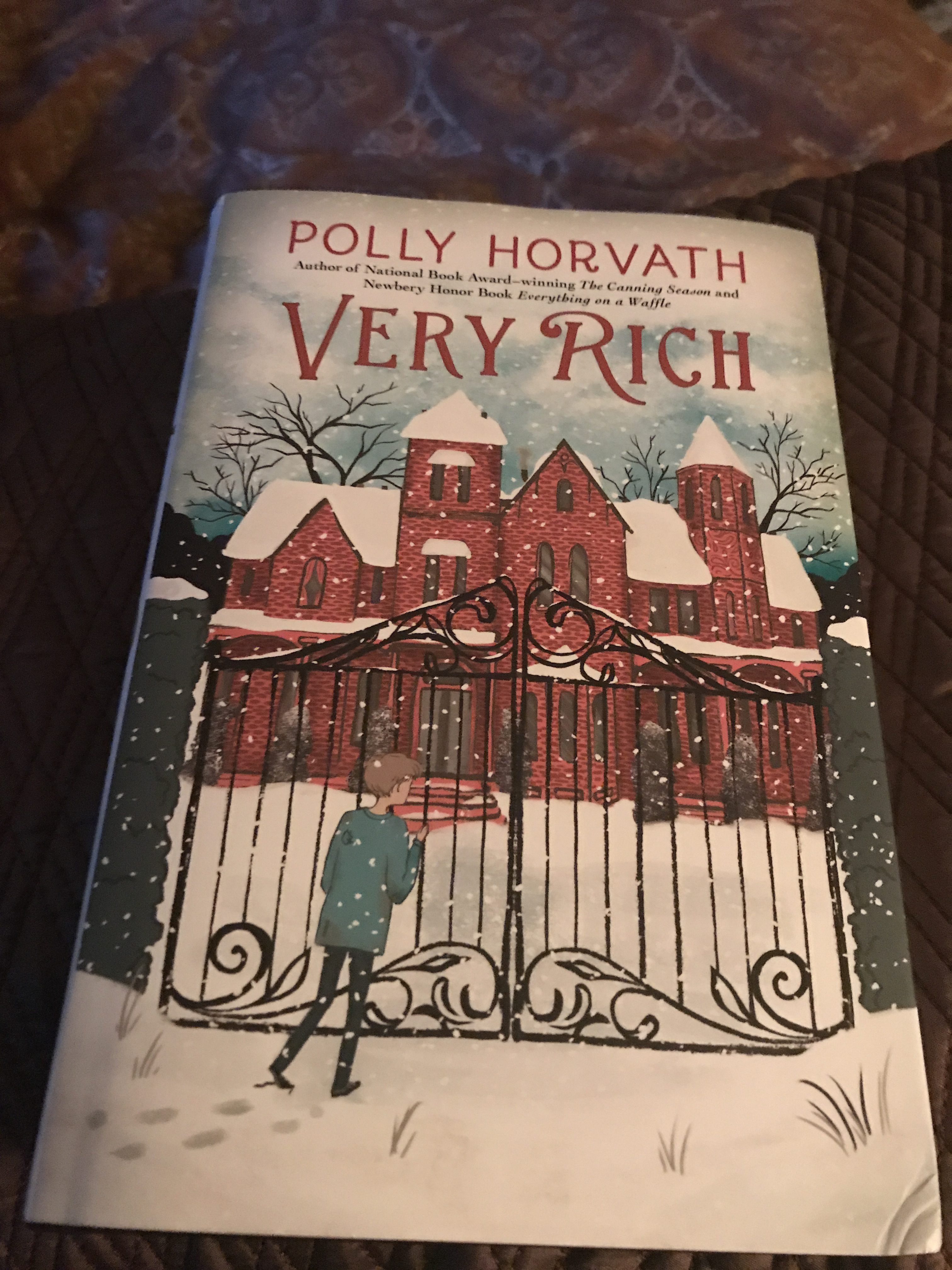 YA (Young Adult) isn’t a genre I read often because…I’m not a young adult. And, I don’t have children who are anywhere near that age group yet (whew!). But, when Christmas time rolls around, I have to read a wide range of books I normally wouldn’t because I do lots of ‘books for everyone on your list’ type work; this is why I picked up the festive novel Pretty Rich by Polly Horvath, and I thoroughly enjoyed my foray into young adult land. And yes, I realize it is January and no one wants to think about Christmas right now. But, I totally forgot I had read and written a review on this book, so let’s pretend it’s December 23 shall we?

The book begins days before Christmas when we are introduced to ten-year-old Rupert Brown and his dreary life. He belongs to a very large family, in a tiny cold house. His mother works as a cleaner to feed her children. His father doesn’t have a job (hasn’t, for a while in fact) and aside from scrounging food scraps, doesn’t do much for his family in general, other than watch television. His mother is crabby from working all day and having so much work left for her at home, so Rupert’s home life is less than savoury, and marked most obviously by a lack of food.

Things begin to look up for Rupert though-one day, while trudging through the heavy snow with his inadequate clothing, he realizes he showed up for school by accident because it’s Christmas Day. On his way home, he gets caught on the gate of the Rivers house, which flings him into their huge yard as their cook tries to ‘zap’ him off the fence. Rupert is welcomed into the home as a sort of retribution for the electrocution, so he indulges in a luxurious over-the-top day of food, games and presents. Through an unfortunate family rule, Rupert loses all the gifts he won throughout the day, and leaves empty-handed with only a full belly to show for his efforts. Because they feel guilty, one-by-one the Rivers family members take Rupert on amazing adventures to make up for their previous cruelty, exposing him to fantastical experiences.

This book is not ‘fantasy’, it takes place in present day Ohio. However, magical things do happen, in fact it’s VERY similar to Charlie and the Chocolate Factory by Roald Dahl in many ways (perhaps too many ways?). There is a certain amount of ridiculousness, humour, and moral teaching mixed into this novel, and I thoroughly enjoyed reading about Rupert and his trials. Horvath strings along Rupert on each adventure, mere seconds away from indulging in mouth-watering feasts, when at the last minute, something crazy happens that delays his much-needed nourishment. Although it seems minor, this ratchets up the suspense for the reader, placing us firmly in Rupert’s worn-out shoes as he yearns for nothing more than a hearty hamburger

The ‘message’ in this book isn’t as obvious as you would think when class differences like this are involved, but I really enjoyed that aspect because it leaves room for interpretation. This flexibility is especially important when dealing with preteens-it communicates the fact that we adults don’t have all the answers, and input from kids is always necessary. I can’t see any kid over 13 wanting to read this book because they’d probably roll their eyes at it, but if a ten-year-old has a strong reading ability (it’s 294 pages long) they would love this story, as would adults who are looking for a feel-good read around the holidays.