Book Review: What My Mother and I Don’t Talk About, Fifteen Writers Break the Silence, Edited by Michele Filgate 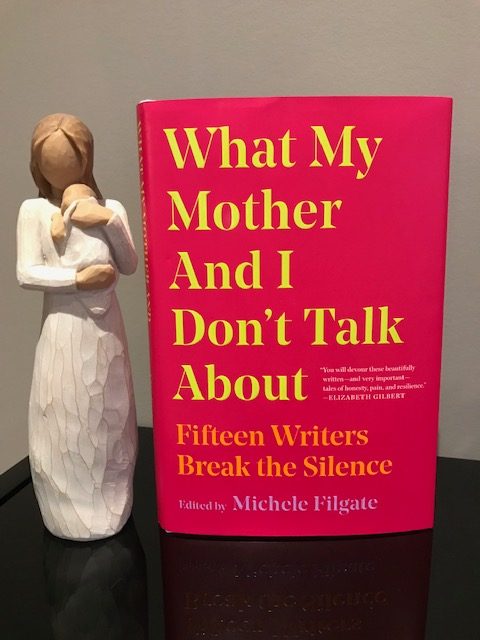 With thoughts of Mother’s Day no doubt swirling around in everyone’s minds this weekend, I thought I’d post a review of a book of 15 essays about motherhood. What My Mother and I Don’t Talk About, Fifteen Writers Break the Silence are all fairly short pieces written by authors about their mothers. They range from the quirky to the downright depressing which will come as no surprise to anyone, because as we all know, there is no ‘one kind of mother’. Despite their differences in tone, each essay is surprisingly similar in their thoughtfulness and quality, keeping the reader engaged throughout the 258 pages.

My mother passed away from cancer when I was 13, so I was hesitant to read this book because I assumed it would bring up an unpleasant jealousy I sometimes experience when people talk about their own mothers (sorry not sorry). But to be perfectly honest, this book also reminded me of the difficulties of having a mother. The writers included in this collection all struggle with the mothers in their lives; some to a more serious and negative degree than others. Some are estranged from their mothers, some have even purposefully distanced themselves because of the abuse they endured at their mother’s hands as children. What unites these stories is their author’s desire for a certain type of mother, one that is open, loving, and willing to discuss anything and everything. Perhaps this is a generational difference but a common theme throughout is the mothers’ reluctance to discuss the past, even when they are interviewed by their children for the express purpose of research for these essays. My theory: people my age (and of course I’m generalizing here) are taught to be more open with their feelings and opinions, while older generations were so preoccupied with simply getting by that one’s emotions were relegated to the background.

I’m also surprised at how revealing these pieces are; families’ dirty secrets are released at an exhausting pace: sexual abuse, rape, physical and verbal abuse and outright neglect all make an appearance. But once again, the mothers aren’t ready to dwell on these negatives; they want to move forward, heads held high, while their adult children are desperate to return back to these moments, most often wanting to know ‘why’. One can hardly blame them, but as a parent myself I can also understand this impetus to look ahead. It’s the hope for the future that gets us through the difficult times. Admittedly my parenting problems are quite minor at the moment (think toddler not napping properly and being extra fussy at a restaurant) but I’m always thinking of the next phase or milestone for my children because this is what makes me excited about parenting in general. Perhaps the mothers featured in this book are no different, even if we all approach the idea of parenting differently, or in some cases, not at all.

My favourite essay is the last one, titled “I Met Fear on the Hill” by Leslie Jamison. She tells the story of her mother’s first love Peter, who was (and still is) a peace-loving hippie that wrote a story about their love shortly after she left him. Her mother went on to marry someone else and have Leslie, but as an adult Leslie requests a copy of the manuscript from Peter to learn about what her mother was like before she had children, even going so far as to meet up with him to hear his point of view in person. This story is written by an adult child who adores her mother, in fact she has friends tell her they’re sick of hearing about how great her mother is. But once again, Leslie is determined to find out more, dying to own even more of her mother’s past than she already does. Her desire for more knowledge is insatiable, but instead of being irritated by this, it lent a very honest and humble aspect to the writing. This piece is also very funny so I was relieved the collection ends on a positive note.

This is a very well-written book, and despite the difficult subject matter, I really did enjoy reading it. I don’t tend to pick up books that include so many different writers, but I appreciated the diverse set of voices taking on the same topic, it served to highlight the similarities in our lives rather than the differences. Fans of Rebecca Solnit, Joan Didion etc. will most likely agree-this is a worthwhile literary read that will leave you lots to ponder once you turn the last page.