Book Review: I’m Fine and Neither Are You by Camille Pagan 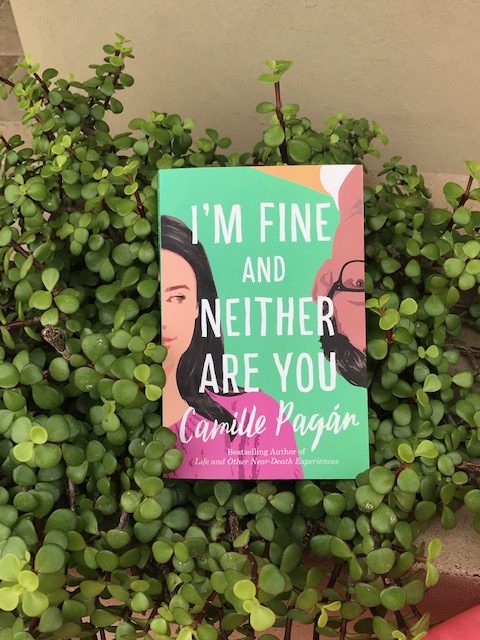 I picked up this book in honour of Mother’s Day, which happened about a month ago for us Canadians-in fact, it’s Father’s Day this weekend. In case that hasn’t become obvious yet, I tend to post these reviews months after I’ve read the book and written my review! My goodreads list (on the sidebar) is an accurate depiction of what I’m reading at the moment. Anyway, this is the story of two working mothers who are best friends with young children. But then tragedy strikes, and one of them, Jenny, passes away unexpectedly. Penelope is left with the devastating realization that she may not have known her friend as well as she would have liked, and her already hectic life is about to get much lonelier without her confidante to lean on. I originally picked up the book I’m Fine and Neither Are You by Camille Pagan because of the title (isn’t it great?) but instead I found an honest look at how difficult marriage and all that comes with it can be.

Penelope and Jenny aren’t all that different on the surface; yes Jenny has more money, only one child, an impeccably styled house, a handsome and hard-working husband and an extremely successful blog that nets hundreds of thousand in advertising dollars. But Penelope has a great job too, she’s the bread-winner in her household, and her husband Sanjay is supportive, but he doesn’t do his share of the housework even though he’s not working. So, as is so common, comparison and jealousy rears its ugly head in this book. The story is quite simple; how will Penelope move on after Jenny’s death, and will she make any changes in her own life now that she’s had this startling reminder of mortality?

Pagan shines a light on some of the best and worst aspects of female friendship. This is somewhat of a generalization, but I think women are more prone to comparing or competing with other women than men are. At the same time, the bonds between women are much stronger; Jenny and Penelope are so close that even their husbands admit they may not know their own partner as well as these women do. This death spurs Penelope to work with Sanjay on improving their marriage, which to many may seem like strange or unrealistic timing, but I completely understood this impulse. I have a few friends who are going through divorces, and everytime I hear of some other couple breaking up, it forces me to look at my marriage in a more critical way; sometimes consciously, sometimes subconsciously. This book most certainly falls into the chick lit category, but I appreciated the fact that it delves so deeply into many uncomfortable topics.

Despite the dramatic beginning, this relatively short novel is really just an exploration of a domestic relationship, parenthood, and how women balance it all. The concept of emotional labour is touched upon quite a bit, and because this is a topic I’ve read lots of non-fiction about, I was happy to see it dealt with in the fictional arena too. Even though Penelope was making the majority of the household income, she was also expected to do all the other little things like ensuring the kids had lunches packed for the day, arranging pick-up and drop-off, etc. But as things start to truly fall-apart in Penelope’s world, she gets some life-changing advice: ‘stop trying to make it look easy’. Using honesty as a new mantra going forward, she begins to see how she enabled others to treat her unfairly, which was a lightbulb moment for both her and myself.

I’ve said before that I like reading books about marriage and this one is definitely not an exception. This is one I’ll highly recommend due to the insightful content you’ll find in between its covers.