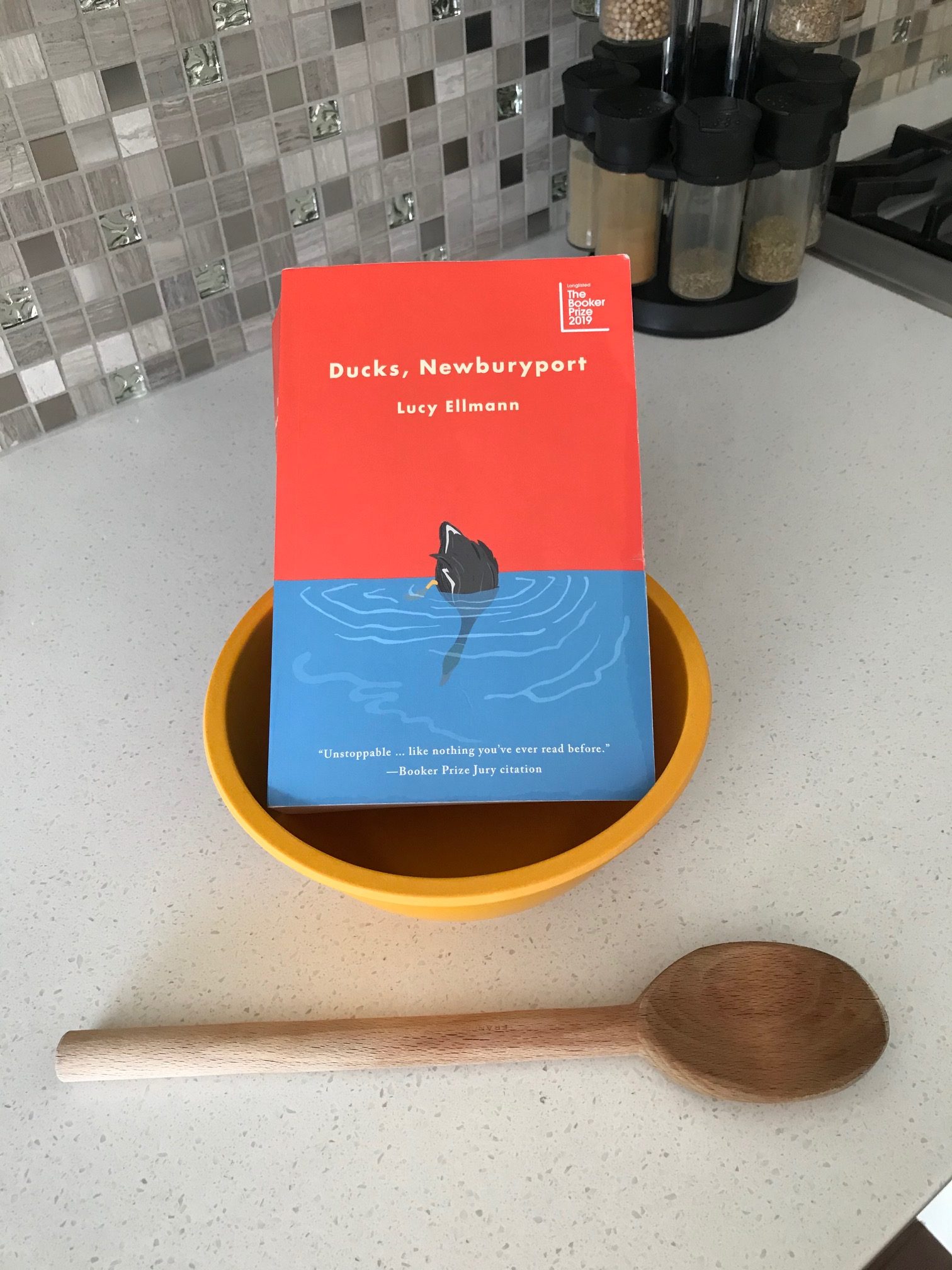 This review has been a long time coming. Not because I’ve put off writing it, but because it took me so bloody long to read this book: two whole months which is definitely a record for me. At 988 pages, many of those pages including just one long run-on sentence, this book isn’t for everyone. But I hate to be left out of a literary sensation, so I forged ahead with Ducks, Newburyport by Lucy Ellmann despite my hatred of long books.

There are two story lines in this book; the main one that takes up 90% of the pages is the stream of consciousness of one woman who is a mother of four children living in Ohio, USA. She runs a small business out of her home creating baked goods for local restaurants and shops, and is married to her second husband Leo, whom she adores. The second and much smaller story line is that of a mother cougar who’s roaming the states of Ohio and Pennsylvania, searching for her cubs that were abducted by some well-meaning but entirely mistaken humans. The two story lines do intersect at some points, although not in a dramatic way. But! There is significant drama in this book, unfortunately you have to reach the last 50 pages of the book to find any of it. People who love a good plot-driven novel will want to run far, far away from this book, but for those who like to settle in for the long haul, you’ll be rewarded if you make it to the end.

What struck me most about this book was how relatable the protagonist (who is never named) is. I’m going to guess most men won’t identify with her, but as a mother who works from home, I found myself nodding along to her rants more than I’d care to admit. She’s working in her kitchen while her family moves around her, and because she’s literally in her home most of the time, she’s still expected to cater to her kids needs at every moment, so she’s constantly interrupted. Her train of thought is choppy, difficult to follow, and jumps from topic to topic within the same line on the page. It’s not always pleasant to read about, but it’s so accurate at the same time. While pondering what to make for dinner she’s recalling a horrific terrorist attack from a few months ago. While stirring the flour mixture she’s wondering why so many American politicians bow down to the NRA (National Rifle Association). While lamenting the death of her mother, she wonders why her teenage daughter Stacy seems to hate her. Her thoughts go round and round, repeating more often than not, and creating a tension that the reader can sense in not only the woman, but themselves. Her preoccupation with the proliferation of guns in America is a particular topic that seems to fascinate and repulse her, and it’s visited over and over again throughout the narrative. As a Canadian, it’s hard for me to guess if this is common for my southern neighbors, or if she’s more anxious than most. My American readers are also welcome to comment on this, I’m genuinely curious how often the topic of guns comes up for them…

Pollution, and the worsening state of the environment is another common subject, her anxiety worsened by the fact that her eldest son Ben is doing a school project analyzing the chemicals found in their town’s water supply; spoiler alert, it’s not good! She tries to make environmentally friendly choices, but Stacy is always pointing out how much more is needed to make a difference, so she ends up feeling hopeless more often than not. She’ll find herself getting annoyed over something minor, like a family member not putting something back where it came from, then admonishing herself because so many people have way bigger problems like the increase in war refugees in the middle east. I must admit I make these crazy jumps in my head too. I’ll be annoyed that my husband left his dirty socks on the bedroom floor AGAIN but then I’ll remind myself that I’m lucky we even have bedroom floor in the first place while others live in straw huts with dirt floors. So although her interior monologue may come across as insane to some, I am (sadly) very similar.

The juxtaposition of the lioness and the mother is what makes this book even more interesting, because it leaves the reader wondering ‘why’. Is Ellmann trying to demonstrate the parallels between a human mother and an animal mother? Or is the cat’s outdoor roaming meant to be a soothing balm to the readers after the harried musings that take up the majority of the book? I must admit there were times I considered giving up reading this as I grew frustrated with the length of it, but every time the cat’s story returned, it gave me more energy to keep going. And now that I’ve had a few days to reflect on the experience, I’m glad I kept at it. Reading fiction isn’t always an easy task (but if you WANT it to be easy, you can make it easy, and you should be proud of what you read regardless of its difficulty, reading is good for us no matter what it is) and this book is the perfect example of that. There is one thing that reading should always be, and that’s rewarding, which Ducks most definitely is.