The Paris Bookseller by Kerri Maher 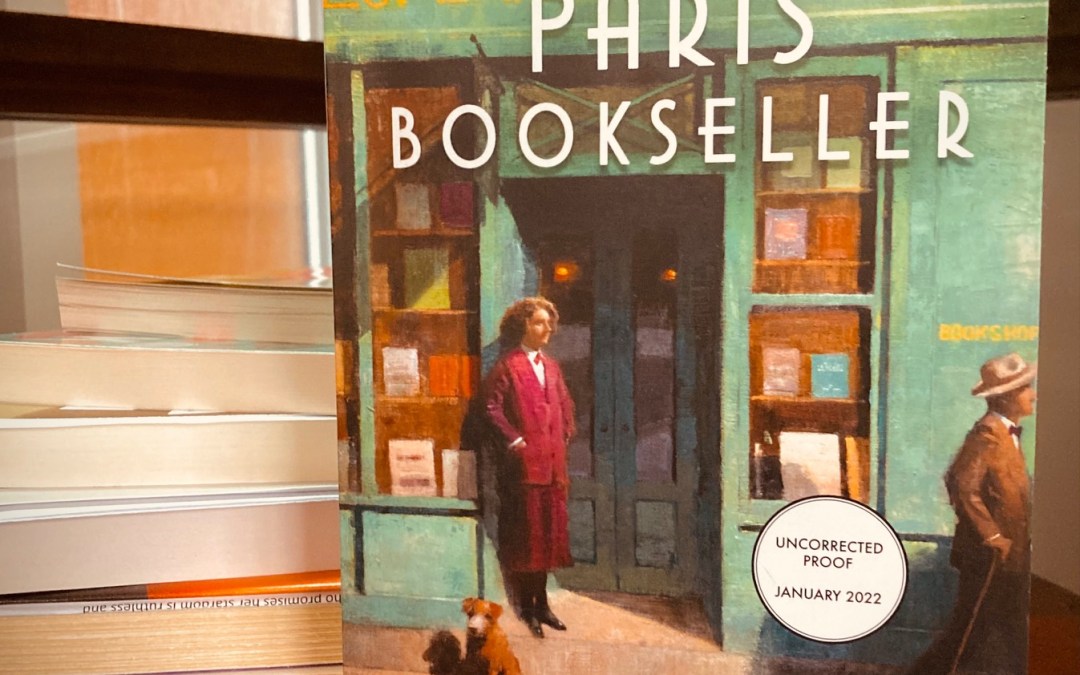 Another example of my favourite genre; books about books, The Paris Bookseller by Kerri Maher tells the story of the infamous book store Shakespeare and Company. Is ‘books about books’ an actual genre? No, I made it up, but it’s a way to categorize my absolute favourite kind of book, and I know that lots of bookworms feel the same way I do – entering the world of booklovers through an actual book is an experience to savour, and this work of historical fiction is no exception.

It’s 1919, and American Sylvia Beach is living in Paris, France, slowly making friends within an artistic community who enjoy a good poetic debate. Sylvia is shy, made even worse by the fact that she is a lesbian – a term not coined until much later, in fact, this term doesn’t show up in this book at all because its considered fairly modern. She falls in love with a bookseller named Adrienne, who encourages Sylvia to follow her dreams and open up her own English-language bookstore, which she names Shakespeare and Company. It attracts the bohemian artists living there at that time, which includes Gertrude Stein, Ernest Hemingway, James Joyce, and Ezra Pound. When Sylvia learns that Joyce’s Ulysses is banned in America for being ‘pornographic’ she works together with him to release it under the name of her bookstore as the publisher. As a champion of free speech and equal rights, she is agitated by the notion of a book being banned, and realizes the importance of it being published and readily available to the public. But becoming tangled up in the complicated life of Joyce, along with the courts and publishers in America begins to monopolize Sylvia’s life, driving a wedge between herself, her lover and her friends.

There many elements of Sylvia’s character and situation come together to create an incredibly appealing novel, to readers like me especially. The fact that she rebels against the expectations of her time through her lifestyle and her actions make her an empathetic character, especially to women. But her rebellion is measured and realistic, as demonstrated by a conversation she has with Ezra Pound in her store:

“As enlightened as Ezra was about many matters, he wasn’t much of a feminist, and she didn’t feel like challenging him that morning. If there was one thing she’d learned campaigning for suffrage, it was that sometimes it was as important to shup as it was to speak up.”

-P. 80 of the ARC of The Paris Bookseller by Kerri Maher

Compared to North Americans, Parisians were much more open-minded at that time, so the fact that Sylvia lived with another woman comfortably for many years wasn’t surprising, but they would never have been considered ‘out’ by our modern-day standards, so to this affect I felt Maher was attentive to ensuring the characters reflected the attitudes of that time.

Primarily plot-driven, the narrative includes just enough description to place us within the enviable setting of Paris in the 1920s, but it’s the ups and downs of publishing and bookselling that keeps the pages turning. Sylvia’s family life also acts as a depository of drama, regularly pushing itself to the forefront of the story, that in many ways this isn’t just a book about books, but a coming-of-age story.

The author’s note at the end of the book acknowledge the reader’s desire to know what’s truth, and what’s fiction – a request so often accompanying any kind of book based on a real person’s life. Typically I have to do some internet-sleuthing to determine this once I’ve finished a book, but Maher thoughtfully lays out for us what she took liberties with, and what is based on her research. Based on her notes, she stayed as faithful to the research as possible, which is impressive considering how exciting Beach’s life seemed even though she preferred to stay out of the limelight. Despite her discomfort with fame, her store attracts the most impressive of people, so she often finds herself in the middle of many famous situations. This makes a fun read, and even better, a historically accurate depiction of this formidable woman.