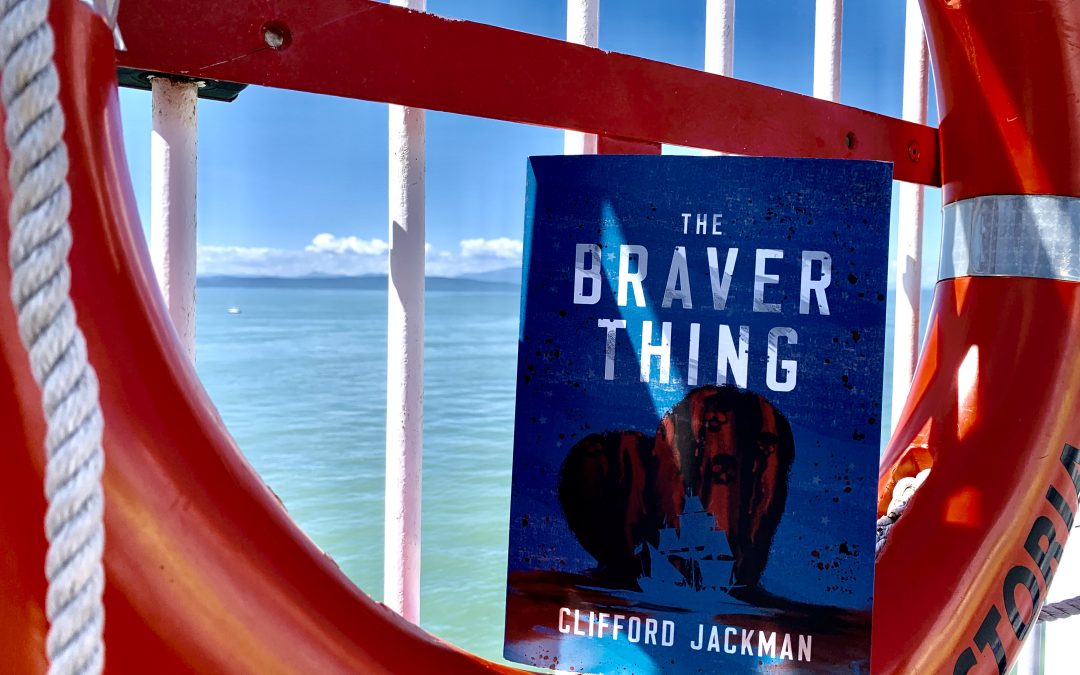 A few months ago I was scrolling through a publishing catalog and I came across a work of literary fiction all about pirates in the 1700s, so obviously I had to read it! Old-timey pirates; I find them equal parts fascinating and scary. I was curious to see if these pirates would be depicted as the Halloween-costume replicas we expect in popular culture; talking parrots, eye patches, missing teeth, you get the idea. I also liked the idea of reading a book set on a pirate ship, a unique adventure novel I never knew I wanted to read until now. The Braver Thing by Clifford Jackman did not disappoint because it had all I wanted and more: skulls and crossbones, chests of gold coins, billowing sails snapping on the high seas, and rum, lots of it!. No wonder they developed scurvy, their tummies were full of alcohol and not much else.

This pirate ship is setting sail for one purpose, and one purpose only; to steal loot. Kavanagh is your typical pirate, complete with one glass eye, but he’s also an adept businessman, gathering investors and fellow pirates to sail “the Taoiseach”, which he is captain of. Fully stocked with both men and supplies, the Taoiseach launches in 1721 from the Bahamas, headed to ports known for their riches. Before they leave, the men all sign a copy of “The Articles” which is essentially a long list of rules they agree to abide by. From the outset, it appears as though the rules are meant to ensure they maintain a democracy on board, but as circumstances change, leadership is called into question and what seemed so simple at the beginning quickly turns sour. Every time a change in rules is requested or a major event is about to take place, the pirates all gather for a meeting, sometimes more than once per day. We lament the amount of meetings that are foisted upon us in 2020, but turns out, meetings have always been a problem, even a few centuries ago. I’m grateful for technology like Zoom, but gathering on the deck of a ship sounds way better than starting at my laptop…

As I mentioned above, the premise of this book alone intrigued me, simply because we don’t seem to get many pirate tales these days. The fact that the pirates in this novel were exactly as I pictured them also helped me orient myself to the promised adventure. I knew going in (based on stereotypes alone) that these characters would be nasty in both dress and attitude, and my expectations were exceeded. Their despicable behavior was truly horrible, but because I was prepared to have this reaction, it did not shock me. What I found truly appalling was the treatment of black people. We all know it happened, yet every time I’m faced with the brutality, it’s a cruel reminder what kind of past these people rose from. There is one scene in particular that still haunts me. The pirates loot a castle on the coast that holds slaves before shipping them west, but before the pirates begin collecting their treasure, they free all the slaves that were being held. Realizing the futility of their escape as they were surrounded by colonies who would re-capture them, most of the slaves simply walked into the surf, drowning themselves rather than face the potential of another capture. Even the pirates were moved by this heartbreaking display, and out of all the violence that occurs in this story, this scene remains the hardest to read.

There are well over 30 characters, and even though there’s a list explaining who is who at the beginning of the book, I still found it difficult to keep track. However, the specifics of each person and their temperament aren’t the key to this plot, instead, The Braver Thing is all about groups of humans: how we rely on each other, and how we organize ourselves. What starts off as a seemingly rigorous fool-proof plan turns out to be nothing short of a disaster. In fact, the latter sections are named after different types of governance: Artistocracy, Timocracy, Democracy, and Oligarchy. Each style pushes for its dominance, but it becomes clear to the reader that none will really succeed, especially when each successive captain struggles with his own internal demons.

I believe this book will have a larger male audience for two reasons. First, it’s quite violent, and features very few female characters. Only one or two women utter a sentence throughout the 400 pages, and they are being raped, more often than not. Secondly, I liken the story to a fictional adaptation of a modern-day business book about leadership, which tends to appeal to a male audience. Each style of governance wreaks a different sort of havoc on the ship, suspicion being the only consistent response as the teams evolve. It’s hard to pinpoint any sort of winner in this situation, but what this book does leave us with is a blueprint of what NOT to do, and multiple examples of actions to avoid when faced with a similar challenge. Other than some clunky sentences and dialogue, I really did enjoy this book, despite the fact that I’m probably not the intended audience. Taking a trip on a pirate ship is never comfortable, but you’re certain to learn a lot.