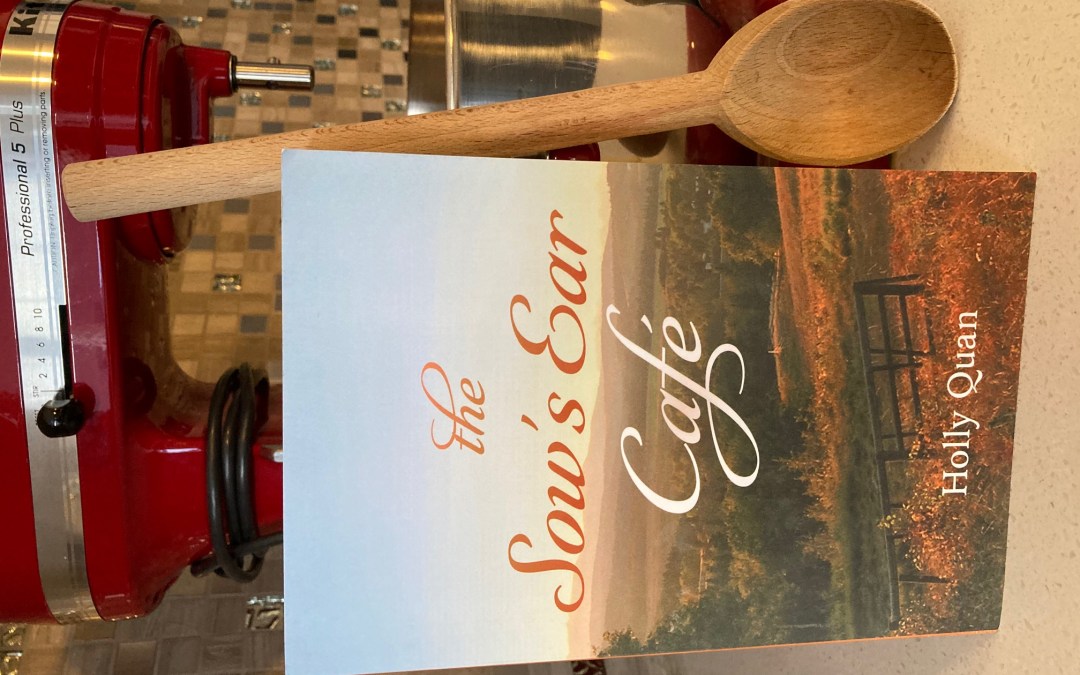 It’s been ages since I reluctantly agreed to accept a copy of The Sow’s Ear Café by Holly Quan. My review policy states I no longer accept unsolicited books, and I typically hold true to that rule, but I received such a persuasive email from Alberta author Quan I couldn’t say no! Note to authors; this is very rare that a blogger will go against their review policy, but it pays to research the reviewer you are submitting to, which Quan clearly did. She acknowledged that I don’t review self-published books but pointed out hers was local, which is something that piqued my interest. I’m embarrassed to say she sent this book back to me in 2018 and has no doubt given up on the potential of a review, but even though it took me far too long to pick this up off my bookshelf, I’m so glad I did. The Sow’s Ear Café is entertaining and well-written which is especially impressive considering this is a debut novel.

Lucie lives a fun life in Vancouver with good friends, a good-paying job and a cute boyfriend. But the shiny veneer of that life is cracking; her boyfriend hits her, then she loses her job and ability to pay the rent on her fancy condo. One of her friends urges Lucie to go on a trip after spending months in a depressive state, so she heads east, ending up in a small town called Sweetgrass in the foothills of the Rocky Mountains in Alberta. Here, she slowly builds a new life for herself with the help of some local characters and cowboys, each with their own secrets, talents and problems. To pay her bills Lucie lands as a job as a waitress at the titular café, where the opportunity of finding love also presents itself. A self-professed ‘city girl’, Lucie has a lot to adjust to living in this rural area, but as a transplant myself, I was able to relate to her learning the ways of Alberta, especially the cadence of the weather! There is nothing us Northern Canadians love more than complaining about the weather, but if you saw the amount of snow building up on my front lawn, you would understand why. With a little bit of romance, lots of tension, and more suspense than I was expecting, this novel is a delightfully balanced example of storytelling and description.

The fact that I live less than an hour away from the fictional town of Sweetgrass, (which is based on Turner Valley ) means I can easily picture Lucie’s surroundings and her awe of the seasonal change that’s so apparent in this part of the world. Having a clear picture of where the characters are based always increases my appreciation of a story, and this was no different. The environment itself is a driver of the plot, it’s what triggers Lucie’s changes and it so often brings about individual growth. Anyone who enjoys a nice walk in the woods can attest to this; being in nature is healing, and its power is on full display in this book. I found this one of the strongest parts of Quan’s writing; I never once felt like her descriptions were dragging on, instead she knew just when to hop from painting a picture to driving the action, always keeping the story moving. At 400 pages, this book could have used with a better substantial edit because it doesn’t need to be quite this long, but the writing is strong enough to sustain the lengthy narration for the majority of it.

A slow adjustment to Alberta chinooks is one of the few things I had in common with Lucie, but just because I couldn’t relate to the main character doesn’t mean I didn’t enjoy reading about her. In fact, there’s a few instances where her internal dialogue is almost offensive, but that didn’t hinder my eagerness to know more about her. Lucie is a complicated person with a broken past, growing up with a neglectful mother and not much else. It’s these painful memories that shape who she becomes well into her late-thirties, so this novel is a coming-of-middle-age take on what it’s like to transform yourself just shy of your 40th birthday.

Other than some clunky moments of dialogue, the writing in this book flows nicely, keeping the reader well-informed of Lucie’s shifts in perspective while still dropping clues to potential future conflict. Even though she was caught up in past memories, we were always looking to the horizon, both admiring the sunset and anticipating what come next for her. The ending is abrupt but realistic, and I admire the fact that Quan doesn’t wrap everything up nicely to appease us. I’m pleasantly surprised at this little gem that was hidden in the depths of my TBR, so while we make the effort to buy local during the pandemic, let’s make sure to read local too.