Book Review: The End of Craving by Mark Schatzker 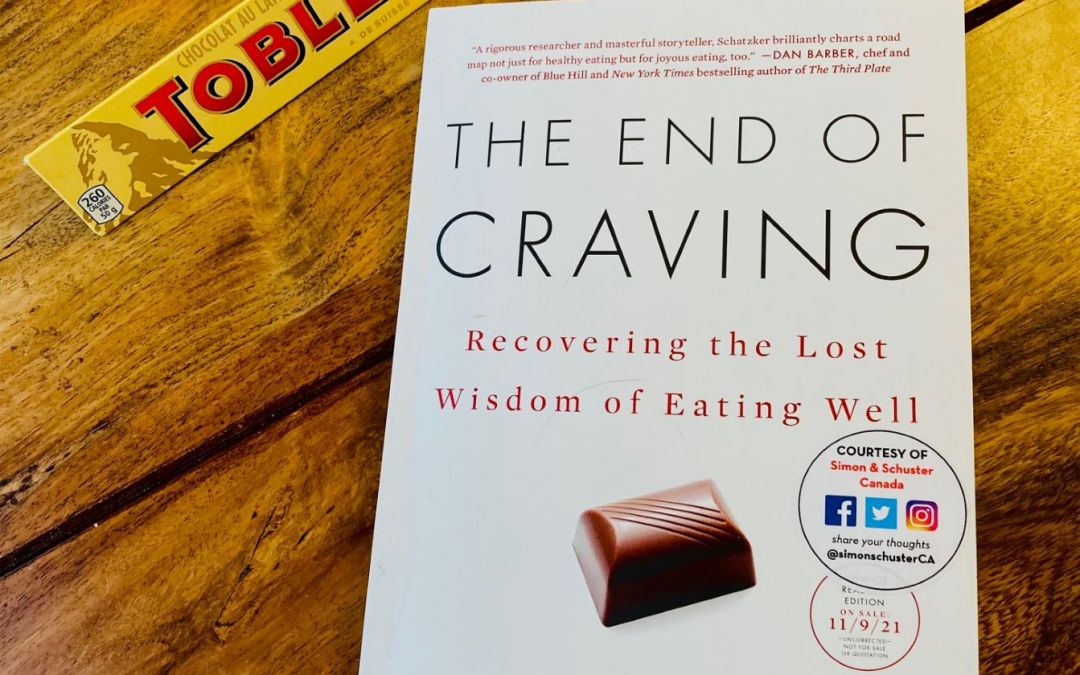 I will fully admit to choosing this book based on the cover alone; the single square of chocolate signaled to me that within these pages, I may find the solution to my chocolate addiction. Now don’t get me wrong, I would never give up eating chocolate entirely, but I would like to have better control over when I eat it. Right now I basically eat it…whenever it’s in front of me. Is this the end of the world? Of course not, I’m a fairly healthy eater and I exercise regularly, but I’d love to build up my willpower against this personal kryptonite of mine. The End of Craving, Recovering the Lost Wisdom of Eating Well by Mark Schatzker was unfortunately not the answer to my chocolate-fueled prayers. It certainly brought up some interesting points, but I ate a Toblerone Bar after finishing the last few pages so…clearly I’m not a quick study.

Schatzker takes readers back a few centuries to understand how food has changed over time. He begins each point with a story of sorts, one of the most distressing is a description of a strange disease known as ‘Pellagra’. It appeared in different countries all over the world, and was running rampant due to poor nutrition, mainly, people in poverty who couldn’t afford a variety of foods typically developed it, much like scurvy. North America fixed the problem by adding these much-needed minerals to flour: niacin, thiamin, riboflavin, and iron. Places like Italy, where Pellagra was also a problem, didn’t alter their food, instead they slowly solved the crisis by promoting a wider range of food to eat, including rabbit. The author argues this particular diversion of paths is critical to our understanding of Italians and how they eat now, because despite their love of cheese, butter, pasta, meats, etc. their population remains fairly skinny compared to North Americans, and Schatzker believes it is because that country has not altered the food the way we have here. He also goes on to make links between poverty and obesity, the unequal distribution of whole foods among the population, and reasons behind people’s varying body types despite changes in diet.

As an educated middle-class woman, I’m well aware of the fact that we should all try to eat more wholesome, natural foods. But food additives are a way of life and they have been for awhile, and in general I don’t know exactly where they lurk, or what they are doing – I just assumed many were a form of preservative. As diet culture pervades every part of the globe, many scientists have been studying why certain foods cause some people to gain weight, and not others. This book points to experiments done on both rats and humans that suggests when a food has been altered chemically, our brain signals are confused, and our body refuses to metabolize those calories in a proper way. So, if someone drinks a low-fat drink of 80 calories, that 80 calories will be stored improperly and not burned off, while if someone drinks a 200 calorie full-fat drink that hasn’t been chemically altered, the brain immediately recognizes it needs to burn off those 200 calories and can process it as intended. According to the author this is why Italians still eat lots of fatty foods but remain so much skinnier, because what they are eating is more or less in its natural state.

I’ve always been leery of artificial sweeteners, I think most people are, as ‘tricking’ your body with overly sweet but calorie-reduced food never seems like a healthy choice, so I can’t say I was shocked by the findings of this book. What did disappoint me however, was the fact that the critical and uplifting ‘here is what you can do about it’ part of this non-fiction book was missing. I wasn’t left with much hope, as there was no advice or suggestions as to what readers should eat. I was really looking for a list of foods or ingredients we should avoid. Instead, the author makes his point about why Italians are skinnier, and then…the book ends. Perhaps Schatzker is just giving us the benefit of the doubt, and assuming we don’t need a little wrap-up section that reiterates his points and how to put them into practice to make us healthier, but then the question remains – who did he write this book for, if not the general public who want to end their food cravings as the title suggests? I want to recover the lost wisdom of eating well without traveling to Italy.

Aside from learning the calorie-reduced energy drinks from the fitness app I subscribe to was most likely the cause of a bout of stomach upset I had for a few weeks (I have saved both money and toilet paper by eliminating my consumption of these beverages), I didn’t come away with any real plan for how to avoid this metabolism/body confusion that seems inevitable within our ‘enhanced’ food landscape here in North America. What’s a girl to do? I’ll continue to snack on chocolate until I figure it out…