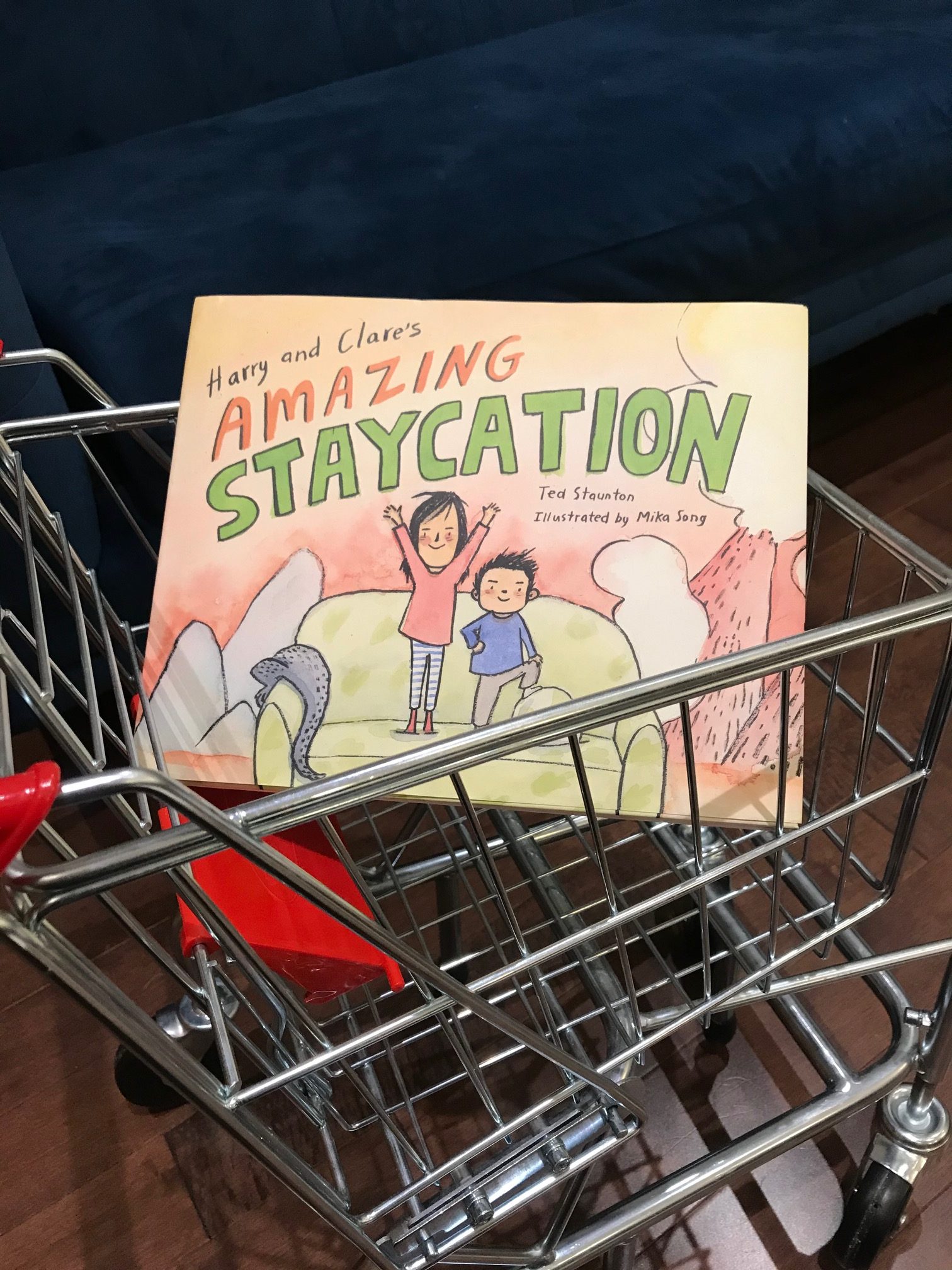 Now that March break is approaching, nervous parents are no doubt asking themselves “what do we do now”? For those who have booked sunny vacations elsewhere, CONGRATULATIONS GOOD FOR YOU but the rest of us need some options so I’m sliding in here to point you towards a few good books that can accompany any activity you choose, all while keeping kids’ expectations low and reasonable (which is also my year-round parenting mantra, by the way).

For those who aren’t planning on going anywhere, Harry and Clare’s Amazing Staycation by Ted Staunton, illustrated by Mika Song is a must-have for your kids’ bookshelf. It’s about a girl and her younger brother on their school break, the first day of which it rains. They stay inside and use their imagination to make up games, with Clare stealing Harry’s snacks every chance she gets. The second day they go grocery shopping with their Dad, and the third day they spend the morning at the pool. I love the fact that this book just focuses on kids making their own fun. Their parents aren’t dragging them around to play places, creating magical craft projects, or even putting them in front of a tablet-they’re ignoring their kids and forcing them to play with each other and whatever else they find in the house: what a novel idea!

My daughter really likes this book too-probably because it features an older sister bossing around her little brother, so she can relate. The pictures are fun because they illustrate what the kids are imagining (i.e. baby carrots as ‘volcano sticks’) and the text is sparse, dropped lightly around the imaginative drawings that take up most of the page, which serves to highlight the action. This book also sparked a lot of conversation between me and my four-year-old because she would comment on the fact that the siblings were turning an everyday thing into an extraordinary thing, for instance, they ‘dove in the sea’ (hunted around the playground) for precious pinecone pearls. What parent hasn’t turned out their kids’ jacket pockets to find a stash of pinecones? I have no doubt my daughter found this book relatable, especially because I’m the kind of parent that deliberately ignores her kids in hopes they’ll banish their own boredom. But I digress-this isn’t a parenting blog!

For those who are heading out on an outdoor adventure, there are plenty of books that celebrate the fun to be had in nature. If you happen to live somewhere that’s temperate all year round CONGRATULATIONS GOOD FOR YOU, but as a Canadian I’m still daydreaming of those days we could wake up and play outside with one or two layers on. We took our kids camping in our tent trailer a few times this past summer, and like any good bookworm, I brought books to join us on our adventures.

If you are anything like me or my children, the thought of planning an outdoor expedition may seem like a big deal, or more hassle than it’s worth, but we’re always happier once we get out there! The Not-So Great Outdoors by Madeline Kloepper is a beautiful example of how rewarding our time outside can be. At first, our young protagonist is irritated she has to leave the city in the summertime, complaining that there is nothing to do while camping. Very cleverly, the author/illustrator has included pictures that prove the text wrong, for example the sister complains “I can’t look out my window at the city lights” while her mother is pointing out the green shimmer of the northern lights behind them. This continues on for about half the book until she realizes how cool everything is; the bike rides, the fishing, and the animal sightseeing have their own special appeal.

Although this won’t make on iota of difference to your kids, this book is also gorgeous, so it gets bonus points from this bibliophile. It has a cloth-bound binding (not the technical term) and the textured cover features a raised title. There’s no slip cover so it’s durable, and the illustrations are done in a rich jewel-tone palette. The text is limited in this one, so it appeals to both my kids, despite the three-year age gap.

One of my daughter’s favourite books at the moment is Who Wet My Pants? by Bob Shea, illustrated by Zachariah Ohora. It features a group of guides/outdoor scouts/animals who are enjoying a campfire when Reuben notices his pants are wet. He immediately assumes this is someone else’s doing and begins to accuse the other animals of wetting his pants to play a trick on him. He then recounts his day, which involves chugging lemonade, going for a hike around a waterfall and falling asleep with his paw in his fish tank. It’s unclear whether or not he realizes it’s impossible for anyone else to have done the deed, but all the while his friends are trying to explain to him that it’s no big deal, and everyone wets their pants at some point in their lives. He eventually gives up and decides his pants are broken, and (sort of) apologizes in a roundabout way to them.

I’m not sure what it is about this book that my daughter loves so much. Perhaps it’s the super cute animal illustrations, or maybe because it’s just a funny topic (she’s at the stage where she loves potty talk, as many kids do), but she constantly requests this one, and I’m always happy to read it out loud because the dialogue between the friends is hilarious, even for an adult.

Regardless of your GPS positioning, reading a book that celebrates ‘the simple things’ is just what you need to get your children on board with whatever you have planned; you’d be surprised how persuasive a simple picture book can be at cultivating excitement in your little ones.