Book Review: The Swells by Will Aitken 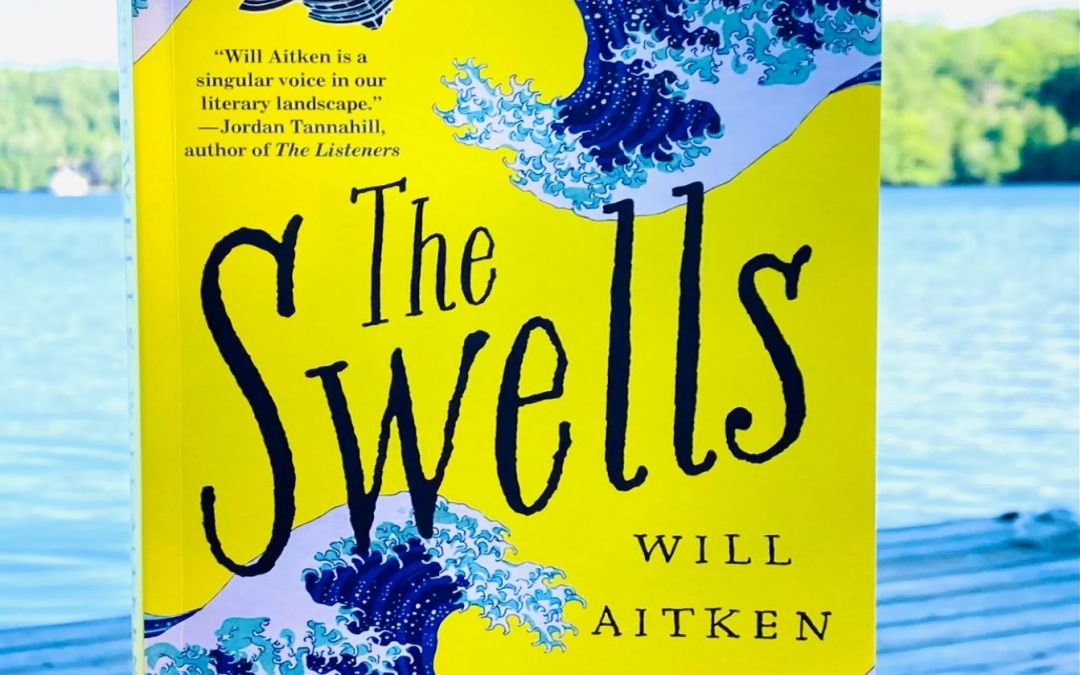 I save all my ‘summerish’ books for reading in July and August, and because The Swells by Will Aitken takes places on a boat, I figured it would be a great novel to dive into while at my family cottage. At first glance I thought this book would make for great dockside reading considering the boat tie-in, instead I realized the whole cottage connection made much more sense. Our modest log cabin is located in Muskoka, and dwarfed by the mansions that have sprung up around it. This area is the playground for the ultra wealthy, which looks very similar to the decks of the fictitious Emerald Tranquility – both could easily be described as “a boatload of white privilege” as the publicity blurb for the book declares.

Briony is a luxury travel writer who is herself broke, but because she writes for and promotes experiences for the rich, often finds herself among them. Her latest assignment is reviewing The Emerald Tranquility; this ship is specifically designed to house the whitest on top (i.e. the passengers) and as you move deeper into the bowels of the ship, each person’s skin colour gets darker – part of the ship’s tour actually describes this color shift, as if they are proud of it (!) The overworked and underpaid staff of the ship launch a mutiny and purposely disable the ship and take its passengers captive. This revolution is led by a white woman – Mrs. Moore who realizes the horrific conditions the workers live in and carefully help craft a plot to overthrow the captain and his armed sailors. Briony falls in love with Mrs. Moore who helps her see the hypocrisy of encouraging this type of unsustainable and exploitive travel and lifestyle. As the ship slowly breaks down in hilarious ways (poop shooting out of each cabin’s toilet for instance), the storyline begins to unravel and absurdity takes over, eventually ending in a surprise revolution of another sort on an uncharted island in the middle of the China Sea.

As you can no doubt tell by the summary above, this book is one with a message, but its commentary on the class system it’s woven into is fairly entertaining, and at times has a downright wacky narrative. The word ‘raucous’ comes to mind when I consider an accurate descriptor of this book, because the author does his best to keep us smiling despite the seriousness of what’s being mocked. The plot is rife with shocking deaths, sexual innuendoes, surprising affairs, outrageous outfits and decadent accessories both on the ship and on its passengers. But death is also inescapable as the ship is thrown into a dangerous typhoon, which only acts as an interlude between the havoc breaking out between the passengers and crew. Luckily Briony is the calm eye of this storm throughout the book, and because it’s told from her first person perspective, I appreciated the grounding she offered us, even when situations spin out of control around her – never as a reader did I feel disoriented or confused, I simply enjoyed the ride.

What makes this book so fascinating to read is the complicated ways in which people of multiple levels of society interact on this ship. Many people, not just the ultra-wealthy can relate to the discomfort one feels when travelling in another country and coming across its desperately poor. In this story the coldness of the wealthy is exaggerated when they complain about a woman’s cries for food as ruining their pleasant vacation, but it reminded me of the time I visited the city of Havana and brought diapers with me to hand out to young mothers on the street. Someone at home in Canada had advised me to bring these things, as it was impossible for Cubans to procure these items themselves. After I had handed out a few to crying mothers with impossibly skinny babies in their arms, the tour guide scolded me for doing so, warning me that it could have started a mobbing of our group. I remember feeling a mixture of both horror at what I had witnessed, and shame for not understanding the danger I was placing others in. Tourism is such a fraught industry, creating a reliance on western money, while perpetuating the issues of or objectifying the locals, and by setting the story on a cruise ship (a fairly destructive form of tourism at the best of times) these problems are highlighted even further to the reader.

There are no easy answers in this book, as even the righteous Mrs. Moore is brought down a peg or two in her attempts to help those who need her.  But the ending offers a slightly optimistic view of how to start making bad things a bit better –  and it all begins with the right intentions. A thought-provoking novel that didn’t feel too didactic while reading, but has given me plenty to ponder since I finished. Plus it doesn’t take itself too seriously, which is why I’m happy to recommend this book far and wide.