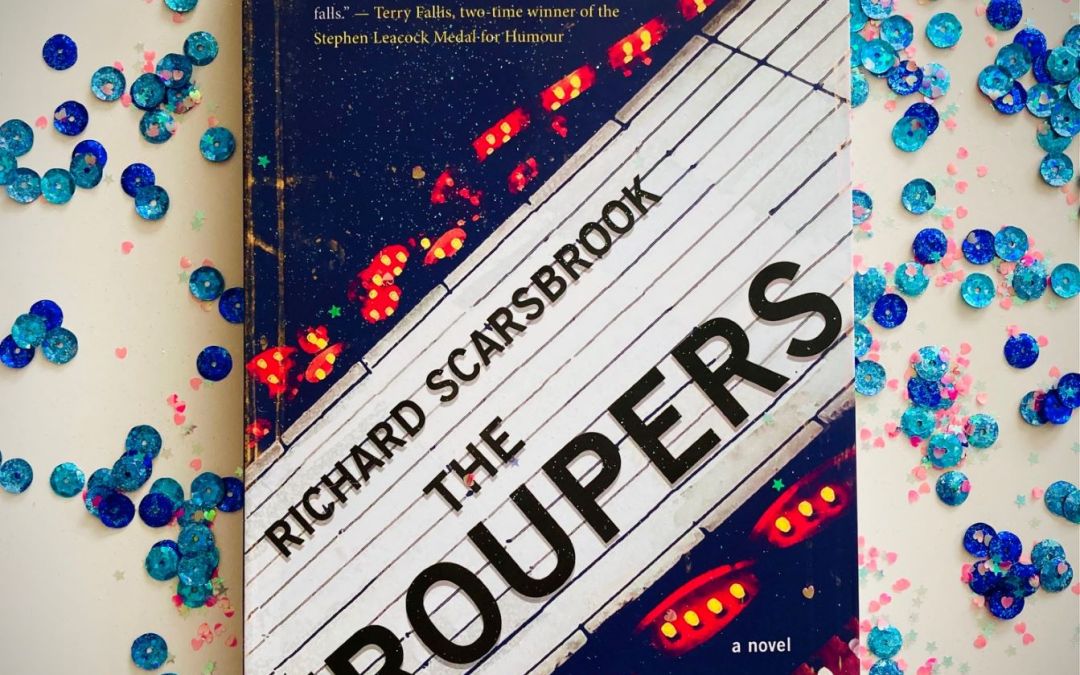 Classic films and television have never been an interest of mine; perhaps it’s because I don’t have time to watch much these days, the thought of sitting down to something produced decades ago never held much appeal, but knowledge of films from the 40s, 50s and 60s would have come in handy while reading The Troupers by Richard Scarsbrook. In case one had an interest in educating themselves in those eras, there’s a helpful filmography list included in the back with all the movies mentioned in the book – and the list is long! Although I can’t see myself taking up that assignment anytime soon, I did enjoy my short dive into that world, along with the five quintuplets of this novel.

Set in Niagara Falls, one of the most recognized tourist traps of Canada, this work of fiction introduces us to the Trouper quintuplets, born to a narcissistic father obsessed with fame, and a mother who we unfortunately never learn much about. Told in the voice of the only boy of the five kids, Errol Trouper, he relates the sad story of his upbringing, from their televised birth, to their unending rehearsals in the basement of their sprawling family home. Together with his four sisters; Joan, Violet, Marigold and Olivia, the Trouper children are all subjected to their father’s laser focus on stardom, and never experience a real childhood. Instead they are home schooled by their mother and run through rehearsals and performances in the afternoon and evenings, putting up show after show in their family’s theatre, The Trouper-Royale Orpheum-Galaxie. Their parents were never real celebrities themselves, their father Lionel was a child star whose light quickly extinguished after a short and successful role in a television show, and their mother only acted in one play. But their grandmother (Lionel’s mother) is the matriarch of the family and continues to finance their theatre runs despite their wavering success. The book begins with the quintuplets as adults, so we quickly learn in the first few pages that Marigold dies, along with her mother, but the majority of the book focuses on their childhood before that tragedy. Although a fiery car crash is not the first tragedy in this book – instead, Errol’s retelling of his childhood confirms the belief that a car accident was only the most visible of sorrows in a very difficult life.

The overall tone of this book is hard for me to describe, because as I mentioned above, some truly horrific things do happen, and we are well aware of them throughout the novel. And yet, despite these dark undertones, the story of the Trouper’s childhood is fairly humorous, with Lionel’s philandering ways and self-obsession often offering itself up as a punchline. He even develops a dependency on alcohol at a young age because a pop with “real grapes” that he is endorsing turns out to be an alcoholic drink, much to the surprise of the families who buy it by the caseload. Although that advertising gig had a short run, it increased Lionel’s popularity, but devastated his health. Humour set against a backdrop of sadness is the best way to describe the atmosphere of this story, but the constant presence of all five siblings (up until the accident) ensures there is always someone to rely on, or commiserate with.

I chose this book because I’m working on a radio segment dedicated to books that feature ‘crowds’, and I can’t think of a better example of what it’s like to be crowded then growing up with four other siblings, and a parent obsessed with your success. But instead of being crowded or bothered by each other, these siblings acted as a support network for one another, even if they didn’t always come across as the nicest of kids to each other. They fought amongst one another, but they also acted as a buffer against the chaos of their parents’ drinking and selfish actions, which also leads this book to have a lighter tone than it deserves – bearing the hard parts of life is always easier when you’ve got someone (or a few people) to bear it with. The length of this novel is surprisingly short at 223 pages, considering the length of time and number of children it covers, so we don’t have time to dwell in the darkness for longer than a page or two. That is my only complaint about this novel – I wanted to spend more time getting to know each character (especially the mother, who doesn’t even get the time she deserves in this review!) and I could have read another 100 pages about these Troupers.