‘A fairy tale for adults’ is the best way I can describe The Table of Less Valued Knights by Marie Phillips. This book has it all: unicorns, knights, magical swords, princesses, and of course, lots of swear words. It reminded of why I loved fairy tales so much when I was a kid; you had a general idea of what the outcome would be, but you still enjoyed the journey to get there.

The novel includes some really fun characters too: Martha, the naive queen, Elaine, the feisty princess, Jemima, the trusty elephant, and Conrad, the prickly giant who rides Jemima because he’s too big for horses. Each person has their own quirks, which endears the reader to them even more. In fact, I wanted to keep reading more of the book once it  ended, just because I was disappointed to leave these new friends behind. Reading about them on a knight’s quest was funny, but I’m sure reading about them doing their laundry would be just as hilarious. Phillips is clearly a master at dialogue and character development as both of these things came together to create an amazing book. 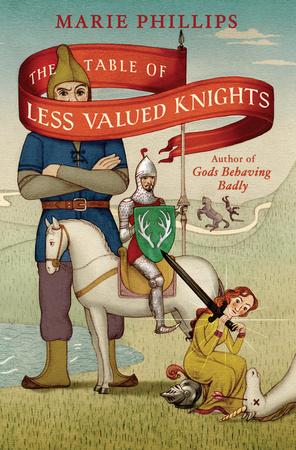 The idea of writing a fairy tale for an adult is a new one (for the most part). People typically see kids as the main audience for fairy tales, mainly because they are expected to always end well. Yes, this book ends on a happy note, and the bad people get punished while the good get rewarded, but it’s also realistic in some of its plot elements too. For instance, the very end of the book introduces a homosexual male couple-not your typical fairy tale couple, that’s for sure! Yes, it’s a book for adults, so this inclusion isn’t shocking by any means, but I believe  Phillips included this  because she is highlighting the impossibility of the ‘happily ever after’ mentality of fairy tales. Why should everything fit into the tiny mold of perfection that fairy tales expect us to aspire to? It shouldn’t, which is why there are gay knights in this book, lots of swear words, self-doubt, tyrannical men who aren’t fully punished, and friendships between African animals and giants. After all….happily ever after comes in all shapes, sizes and colors.