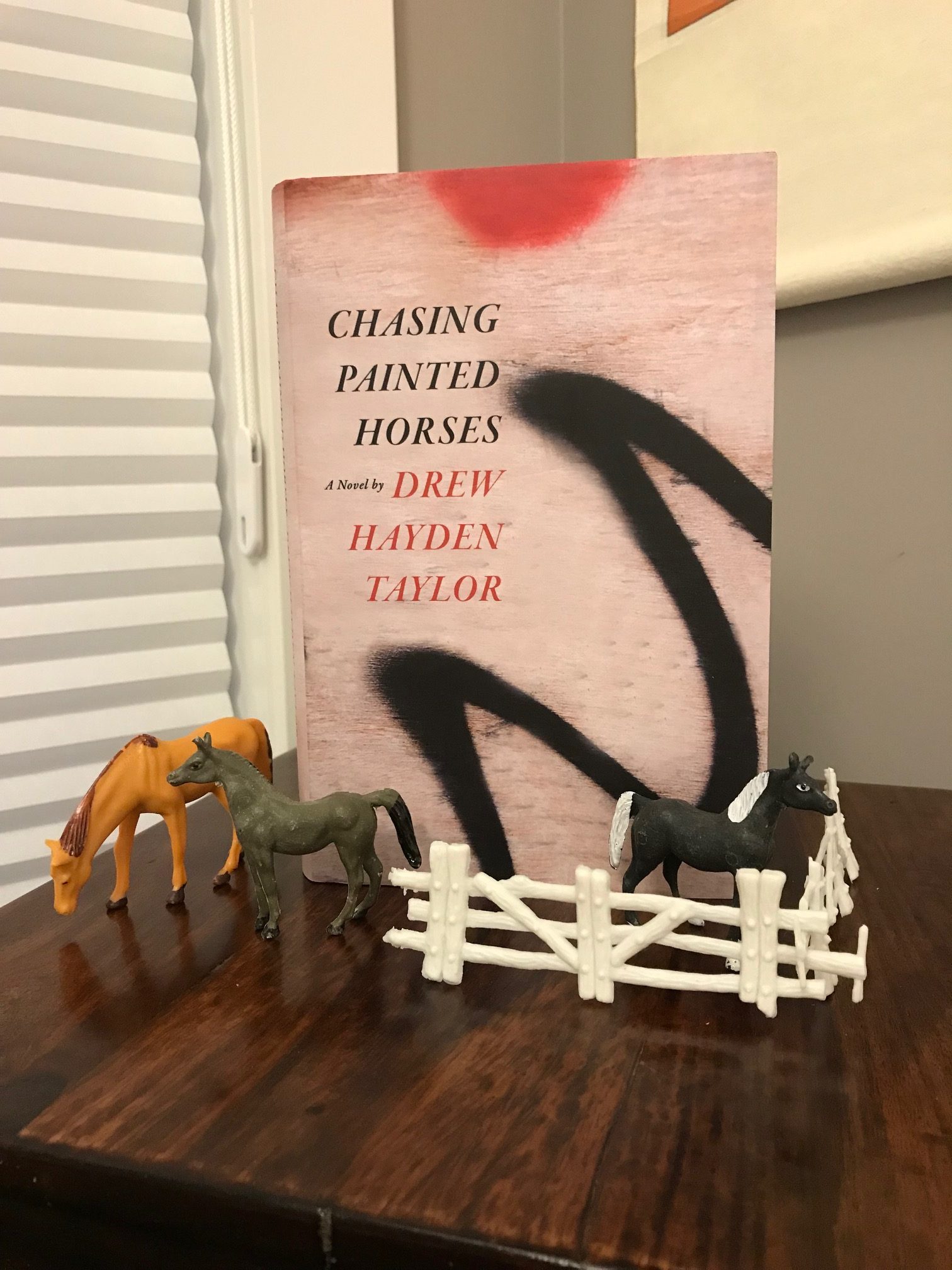 I’m a big fan of Drew Hayden Taylor‘s writing. His words are funny, empathetic, and entertaining all at the same time. Every book of his I read, I’m more hopeful that Canada’s indigenous population, colonizers and immigrants will one day live in harmony, a mutually beneficial arrangement where everyone is legitimately taken care of (getting clean water for every single Canadian would be a great start). But I digress. Chasing Painted Horses is decidedly not political, and because of that, it has more impact. It’s a story of bare neglect and the rippling effects of its damage.

Ralph is an indigenous man and police officer in Toronto. One day he comes across a work of graffiti in an alleyway: a picture of a horse that looks identical to one a girl from his past used to draw. Harry, a homeless man across the street claims to know who drew it, so Ralph treats him to a coffee at Tim Horton’s to discuss it (so Canadian!). From here we flashback to Ralph’s childhood as he meets this young girl, Danielle, who is clearly coming from a broken home, abused in all sorts of cruel ways. But she gains strength from ‘unleashing’ the horse inside of her, painting it onto different surfaces that won’t get her in trouble. Every time Ralph and his friends see a version of this horse that Danielle draws, they are mesmerized; it seems to have otherworldly qualities, and while some are inexplicably drawn to it, others are afraid of it. Harry also has some special powers, he’s tapped into a sixth sense that most can’t access, and he understands that the horse itself is not necessarily a good omen, but a sign of something darker.

There aren’t enough un-explainable events or people in this story to slot it into the magical realism genre, instead I saw these elements as a form of relief for the reader, as it gave us the possibility of hope in what was a somewhat painful story to read about. Again, the humour that infuses Taylor’s writing is also a welcome break from what is a threatening undercurrent running throughout the book. Ralph’s parents are also a beacon of light in the story; Liz is a free-spirit, always trying to better her kids’ life in the most supportive and nurturing way possible while Tye’s devotion to his wife and kids aids in the creation of that comforting home environment they enjoy. Ralph’s home is an obvious antithesis to the other two familial environments we are exposed to; one struggling but generally safe, the other an upsetting amalgam of a terrible accident and further bad choices.

Not all questions are answered in this story, and some readers may be left disappointed by the lack of resolution. Personally I don’t count that as a fault against a story, in my mind this is simply the way things are, a more accurate representation of what our life ends up being. We are rarely offered the chance to tie up our conflicts in a neat little package, and although this is pleasing to read in a book, it’s highly unrealistic. Taylor doesn’t shy away from challenging the reader, but he offers us beacons of light in the most unexpected places, we just have to work for it.