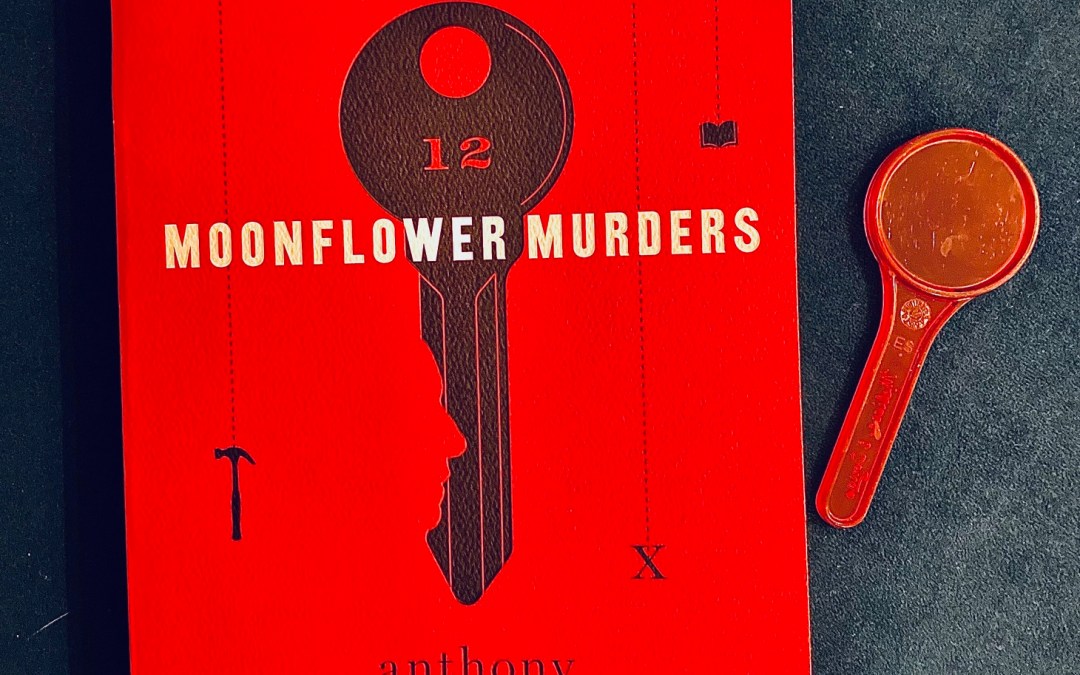 This may be the one and only time I say this, but for once I don’t resent the fact that this is an extremely long book: 600 pages! Moonflower Murders by Anthony Horowitz is a classic whodunnit, and although the references to Agatha Christie in the blurbs are a stretch (how dare you, nothing will ever compare to her!) it definitely has the feel of a Christie mystery, which made me all the more willing to accept the extremely high page count.

Susan Ryeland is a retired London book publisher, living in Greece with her handsome boyfriend Andreas, running a little run-down hotel for tourists. Sounds like a little slice of heaven right? Unfortunately Susan isn’t enjoying her retirement as much as she hoped, so when the Treherns ask her to come to the Suffolk coast to help solve a disappearance that may be related to a book Susan once worked on, she jumps at the chance! The disappearance is tied up in the Treherne’s business; a swanky hotel that Susan also stays in while searching for clues of their missing daughter. Turns out that one of Susan’s old authors (who died) wrote a book about a murder that happened at that same hotel, and the Treherns believe this book is the key to the disappearance. Susan is asked to re-read this book for clues (she was also the editor of it), and to my delight, the book in its entirety is included within Moonflower Murders: dedication pages and all! It’s another classic mystery called Atticus Pund Takes the Case, with a few similarities to the book it nests within, but instead of a female publisher solving a mystery, it’s a Sherlock Holmes type character instead. Taking clues from the ‘book within a book’, Susan continues her own investigation, and as expected, the mystery is solved and wrapped up in a tidy package by the last page.

Surprisingly, this is the first time I’ve come across a book within a book, and I really enjoyed it because it was a unique way to invite the reader into the mystery-solving action. It felt like I was skimming the narrative for clues, but I also got to read an enjoyable little mystery novel at the same time. I’ve read an Anthony Horowitz book before, and I remember there being a bit of a meta-feel to that one too. Moonflower Murders is a sort of sequel to Magpie Murders, which I haven’t read, but have no doubt I would enjoy. Not having read it didn’t impede my joy in this particular book, but for those who want to dive in to Horowitz’s writing, I’d recommend picking up Magpie Murders first. Book lovers like myself will appreciate the fact that Horowitz’s fiction tends to dwell in the publishing world, often making fun of how difficult writers can be. There’s nothing better than an author who doesn’t take himself too seriously.

Susan isn’t a character that we learn too much about in this book; we get a sense of her hopelessness when she leaves Greece, her feelings of inferiority when it comes to solving a crime (she’s not an actual detective!), and her restlessness when it comes to figuring out the rest of her life. Still, her intuition is what makes her the perfect candidate for a protagonist that solves mysteries, plus I love her bookish musings dropped throughout the narrative:

When I first met Craig, four years earlier, he’d had the nervousness of all new writers; the sense that he needed to apologise for what he was doing (p. 221 of ARC).

is it just me, or do all first-time authors sort of sheepishly admit to it, as if it’s something to be ashamed of? I blame our society’s obsession with ‘busyness’ for this feeling that writing a book is self-indulgent, but no matter why it happens, Susan’s observation is spot on, which allowed me to trust the other assumptions/clues she collected throughout her portions of the book. She may not think she’s as clever as Agatha Christie or Sherlock Holmes, but her attention to detail (important in both an editor and detective) gave me shivers of pleasure as she revealed the little phrases that led to her revealing everyone’s secrets. Isn’t that the best part? This mystery is well developed, and had I been half as clever as Susan, I would have been able to figure it out myself-but where is the fun in that? There are plenty of red herrings that I could blame for not discovering the murderer before Susan, but as a long-time mystery reader, I always prefer to be wrong in the end anyway, it makes the final reveal so much juicier!

Speaking of long-time mystery lovers, for those who are curious, this book is most definitely ‘fair play’ meaning you are given all the necessary facts along the way to solve the mystery yourself. I clearly didn’t, but maybe I just need to watch a few more Murder She Wrote episodes to brush up on my detective skills?