Just to be clear, this is NOT a cozy mystery. There is blood and guts in this book, and even a few animal slaughterhouses thrown in for good measure, so don’t pick up Abattoir Blues by Peter Robinson if you are at all squeamish.  I don’t feel bad about starting off my review that way, because Robinson has a lot of fans, so if you want to read his latest Inspector Banks novel (the 22nd in the series), the gore won’t put you off. It’s a typical Robinson mystery: lots of inner character conflict, a wide cast of police figures, and a complicated mystery that unravels slowly but masterfully as you turn the pages. 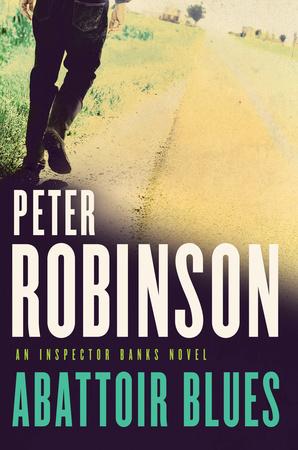 Abattoir Blues begins with two different crime scenes: a stolen tractor at a hobby farm and an abandoned hanger with human blood in it. There are no clues at the beginning that they are at all connected, although as the story develops it becomes clear that there is more than meets the eye. The majority of the narrative is police interviews, which are a great example of Robinson’s adept characterization skills. Some people are not what they seem, and others are described so chillingly you can easily (but unfortunately) imagine exactly what they look like. The vivid descriptions of Robinson’s writing is one of the reasons his famous protagonist now has a television show of his own in the UK.

You’re probably wondering where abattoirs come in (abattoir is another word for slaughterhouse). The majority of the novel takes place on remote farms,  so the topic of livestock quickly leads the investigation into these terrible settings which make vegetarians shudder with distaste and horror. Another interesting side topic is also touched upon in this book; apparently many people that work in that industry can suffer from PTSD, as killing living creatures over and over again takes quite a toll upon the human psyche. I don’t mean to get too sentimental here, but learning about these experiences is an important thing because it reminds us of the sacrifice that comes before we pick up the plastic-wrapped protein from the supermarket.

I don’t read a ton of Peter Robinson books, so I can’t give a definitive ranking of how Abattoir Blues stacks up to the other Banks novels. What I can say is that Robinson is a talented mystery writer, so you won’t be disappointed if you decide to give his police procedurals a try. If you like watching CSI, learning more about the necessary clues to make an arrest and eavesdropping on intimate details of a policeman’s life, you’ll enjoy this book and the others that Robinson has to offer.