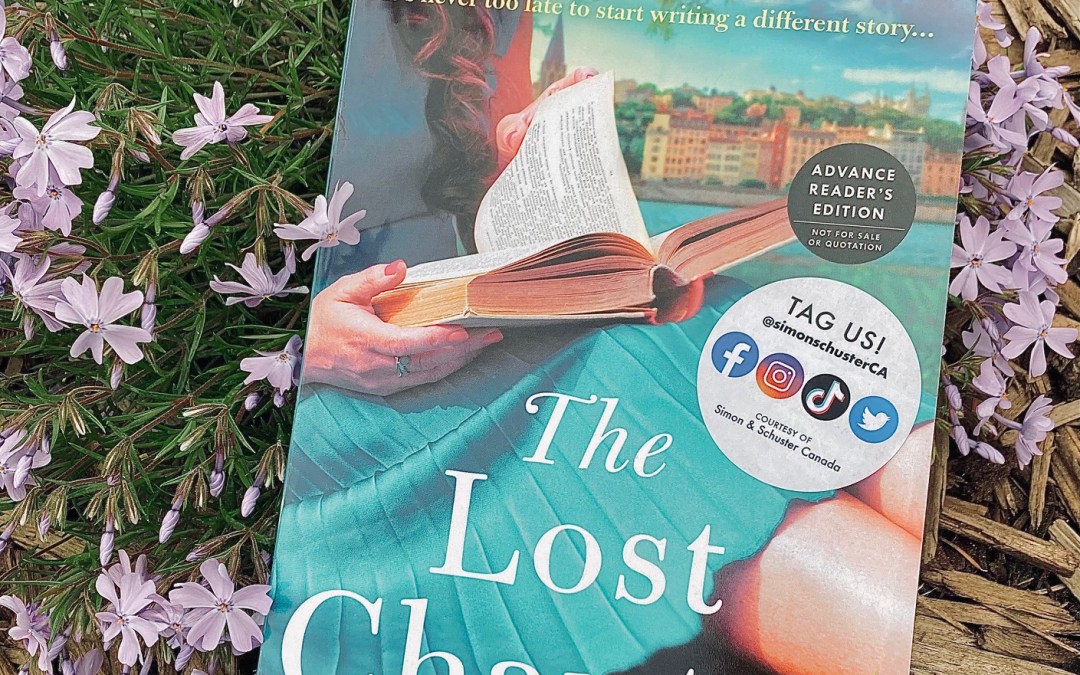 Another book about books – my favourite! Although I should mention that the titular book is a plot device, rather than a major theme. But this reference certainly piqued my interest, which shot this novel to the top of an otherwise teetering pile of historical fiction. The Lost Chapter by Caroline Bishop is a pleasant, plot-driven novel that details the short but impactful friendship of two young women in the 1950s while at a finishing school in France. When one of them writes a book about their time together, it prompts a spontaneous road trip. Aside from a few quibbles, it’s an enjoyable novel that whisked me away from a rainy Calgary spring.

Flo is in her 80s, living in the UK and happy to spend her remaining days working in her studio making lino prints for sale in the local shop, and puttering around with her cat and dog by her side. She’s lived a fulfilling life, seizing the moments when they came, and finding true love with a man who died a few years ago. She hires a local girl Alice to help walk her dog, and they strike up an unlikely friendship. Alice is struggling with PTSD as she witnessed her best friend get struck and killed by a drunk driver only two years before, so she is racked by anxiety, and Flo wants to try to help her out of this painful loop. But when Flo finds a book at a local store written by a long-lost friend of hers, loosely based on their year of finishing school in France back in 1958, Flo becomes the one in need of help. With a desire to reunite and make amends she decides to go on a road trip back to France to seek out her old friend, bringing Alice and her mother with her to help face their own troubles along the way.

We meet Flo in the present-day within her first-person chapters, along with Alice and her mother Carla, also written in the first person. Interspersed between their own accounts are chapters of the book that Flo finds, re-telling the story of that one fateful year in France. We come to learn it’s not a completely accurate re-telling of their year together, but the real story slowly emerges as Flo reads through the book realizing the artistic liberties her friend utilizes. The story within the story narration is done well as it naturally builds up tension to reveal what happened ‘that fateful day’, and although the eventual disclosure is somewhat unbelievable, it doesn’t detract from the power of the story. The chemistry between all the characters is what drives the story forward; their interactions and the results of their time together, rather than discovering what happened decades ago. Many readers are tired of the ‘that day’ trope (as am I) but it’s important to note it’s not relied on too heavily for the story to still work.

One thing I most appreciated was its analysis of what a ‘good life’ is, and the pressure on women to follow a certain path. Because Flo attended a finishing school in 1958, its focus at that time was preparing young women for a life of marriage. But Flo’s friend Lilli (the author) is completely resistant to this shaping of her future towards marriage only, frequently escaping school grounds in search of adventure. Lilli is aware of society’s expectations, but rebels against them, opting to follow her own path, no matter how difficult it looks – especially in a time when being an independent woman is not considered a positive thing. When they meet, Flo is essentially in an arranged marriage by that point, but their friendship points them in different directions once they part, and it’s this change of events that prompts Flo to guide Alice in her troubles decades later. Interestingly, Alice is only 18, but even in this present-day she too feels pushed into being someone she is not, resistant to what those around her expect. While the standards have changed slightly, there is still a box that young women are expected to mold themselves into it where the end result is usually the same: marriage and kids before 40.

My only quibble with this book (and it is a very tiny one) is that Flo and Lilli’s names are different in the fictionalized tale of their time in France, and because the book is told from the point of view opposite of Flo, my brain had a bit of difficult time switching back and forth between the present and past. Flo’s character in the book is so different than the present-day version we are introduced to, it felt like mental acrobatics at some point. I managed through it, but this seemed like an unnecessary challenge that didn’t serve to move the plot along. Other than that, this was a smooth and enjoyable novel to get lost in, with some timely observations that readers of all generations will identify with.