Broken Monsters by Lauren Beukes is a very dark book. It takes place in dark territories (the crumbling city of Detroit being the main setting), but it also delves into the darkest parts of people’s psyches and souls. It shows the dark side of everything: from the mediocre visual art industry, to the crude jokes found in every police department, to the deepest recesses of a killer’s thoughts and motivations. Everything and everyone has a dark side in this violent thriller, but despite this, it kept me reading.

Like in many horror stories, we see the world through not only the protagonist’s eyes, but the monster’s as well. In this case, the monster is a human being who is also a struggling artist, seemingly possessed by a supernatural power that makes an appearance only towards the end of the book. This was a very smart tactic by Beukes, because it left the reader questioning what was really going on. Is this person truly evil, or are they being helplessly maneuvered around by an unknown entity? I don’t believe this question is ever really answered, especially because it’s a question we ask about people who commit heinous acts in our own world as well. Surely people who commit grisly acts against others are not of sound mind? I like to think this is the case, if only to help me sleep better at night.

The book trailer embedded in this review is a good example of the kind of creepiness you’re going to encounter when reading Broken Monsters. Some of the images described in the book are quite haunting, more so because it blurs the line between ‘art’ and ‘gore’. In some cases, the police mistook works of art for pieces of human bodies grafted together (and vice versa), which forces one to question what is in good taste when it comes to the art world. The idea of recording unfolding crimes on one’s phone for the sake of media, and distribution to the general public is also a big topic in this book, when a desperate blogger goes around the police in order to ‘release’ the story for his gain, thus complicating the case against the killer in the meantime. Does the public deserve to see these gruesome images, or is this best left to the professionals? Again, an interesting debate that I don’t have the energy or space for in this blog. 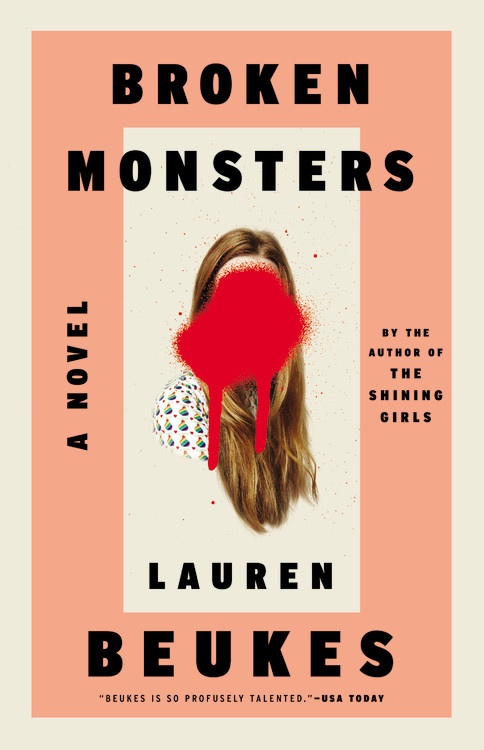 Even the cover of the book is super creepy!

Another aspect to this book that I found equally disturbing was a high school student’s game of baiting potential pedophiles online. In a secondary storyline, they would create false identities of younger girls trying to catch older man in the act of trying to meet with them, and then humiliating them in public with the hopes of scaring them away from this terrible proclivity of theirs. Obviously this is a very dangerous game for the teenagers to play (even though their intentions are admirable), and when it’s later revealed what online bullying one of them has experienced, you feel pity and overprotective of their youth all at once. Once again, these are very timely topics that seem to be cropping up more and more these days.

So, a disturbing look at what lies beneath in the human psyche, but a worthwhile read for those who enjoy the genre and won’t get scared silly by reading it. Can you see yourself picking up this book and being able to read it in an empty house all by yourself at night? I did, and I lived to tell the tale, so take a chance and read it!