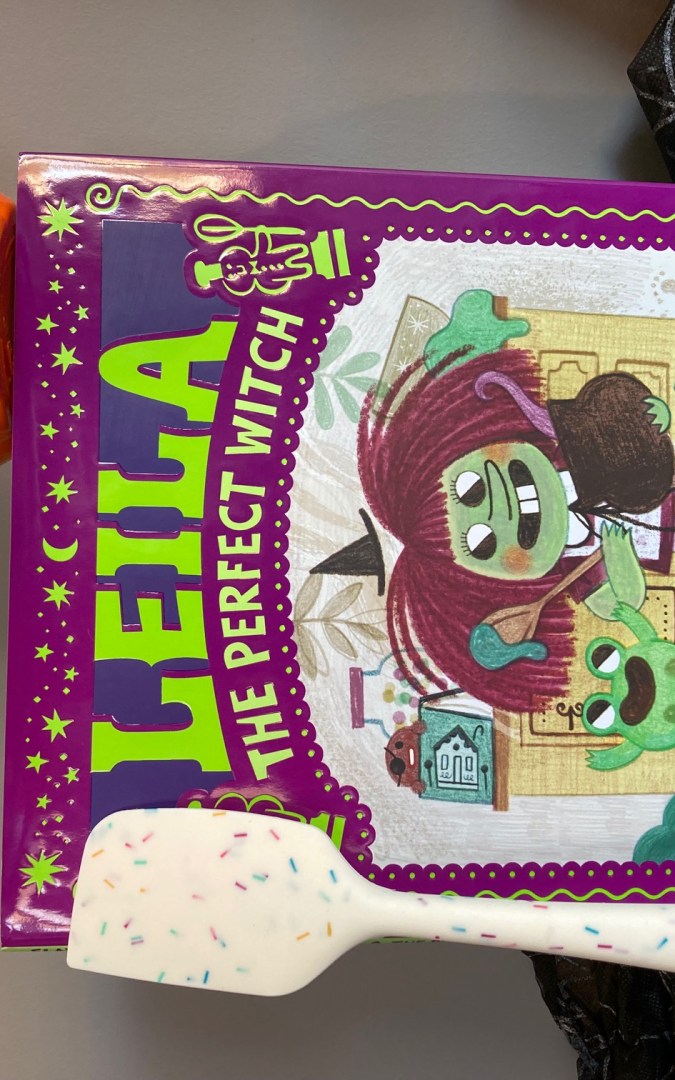 I was excited to see another Flavia Z. Drago picture book land on my doorstep in the lead up to Halloween, because my kids loved her first book Gustavo the Shy Ghost, and it’s still a go-to book for our reading all year round. The second ‘creepy’ picture book I’m reviewing for Halloween is part of a series I haven’t yet read, but had my eye on for awhile now as it’s quite popular, so I’m quite pleased with my haul, and it’s not even October 31st yet!

Leila, the Perfect Witch by Flavia Z. Drago is from the world of Gustavo, with the same trademark illustrations – Day of the Dead elements with bright colourful accents. I love how the publisher has run with these colours on the outside too. Gustavo was neon pink, and Leila is neon green. A high-achieving witch who loves collecting trophies and being the best at everything, Leila is getting excited for the annual baking competition which she has just turned old enough to participate in. She comes from a long line of (possibly Russian or Ukrainian?) witches who all flourish in the kitchen, and she wants to continue the family’s success by proving herself and her baking skills. But when starts to practice, she realizes how difficult baking is, and it’s looking unlikely she will win. Her family members offer to help which quickly improves her results, but it’s not enough to win the competition. She’s disappointed, but realizes winning isn’t everything, and goes back to enjoying time with her friends, no longer concerned about always being productive.

The message this book leaves with children is of course a helpful one, and nowadays, with kids schedules jampacked with all sorts of extracurriculars, it’s even more timely. But it is an obvious message too. Instead, the real treat of this book is its illustrations – Drago is an artist first, and the pictures are full of quirky creatures, spooky elements, and cute animals that play a balancing act amongst the skulls and vampires. The text is kept simple so the pictures are highlighted even further, which they should be. Leila’s pin straight purple locks are the star of the show, and the positive message is simply an added benefit.

With remarkably spare pictures, but a surprisingly creepy story that entertained both myself and my 4 and 7 year old, Creepy Crayon by Aaron Reynolds, illustrated by Peter Brown was a delight to read as a family. Jasper Rabbit prefers to watch tv instead of doing his homework, but when he finds a purple crayon that seems to be capable of only writing the correct answer on tests, he no longer has to worry about getting bad marks. In fact, he’s being awarded the most improved student at school! But when he wants to put the purple crayon aside so he can work on an art project himself, the purple crayon insists on being used. Even after melting it in the microwave to get rid of it, the purple crayon reappears unharmed the next day in Jasper’s pencil case. Finally, breaking it in half and flushing it down the toilet seems to get rid of the crayon forever, and Jasper discovers the satisfaction of studying hard and earning good grades with his own efforts alone. But the crayon washes up on another shore, soon to lure another kid in…

Unlike the book above, this story is told in only black, white and purple. Still, the muted colours is what makes this story even creepier, offering a nod to the old black and white films with melodramatic subtitles – these illustrations create the same uncomfortable atmosphere and tone. The facial expressions of the bunny are what kept me entertained as an adult; that and guessing what was going to happen to the crayon! The crayon’s reincarnations creeped out my 4 year-old, he didn’t want to read it again because he found is so scary (he’ll get over it), but this goes to show how impactful the words are in this book.