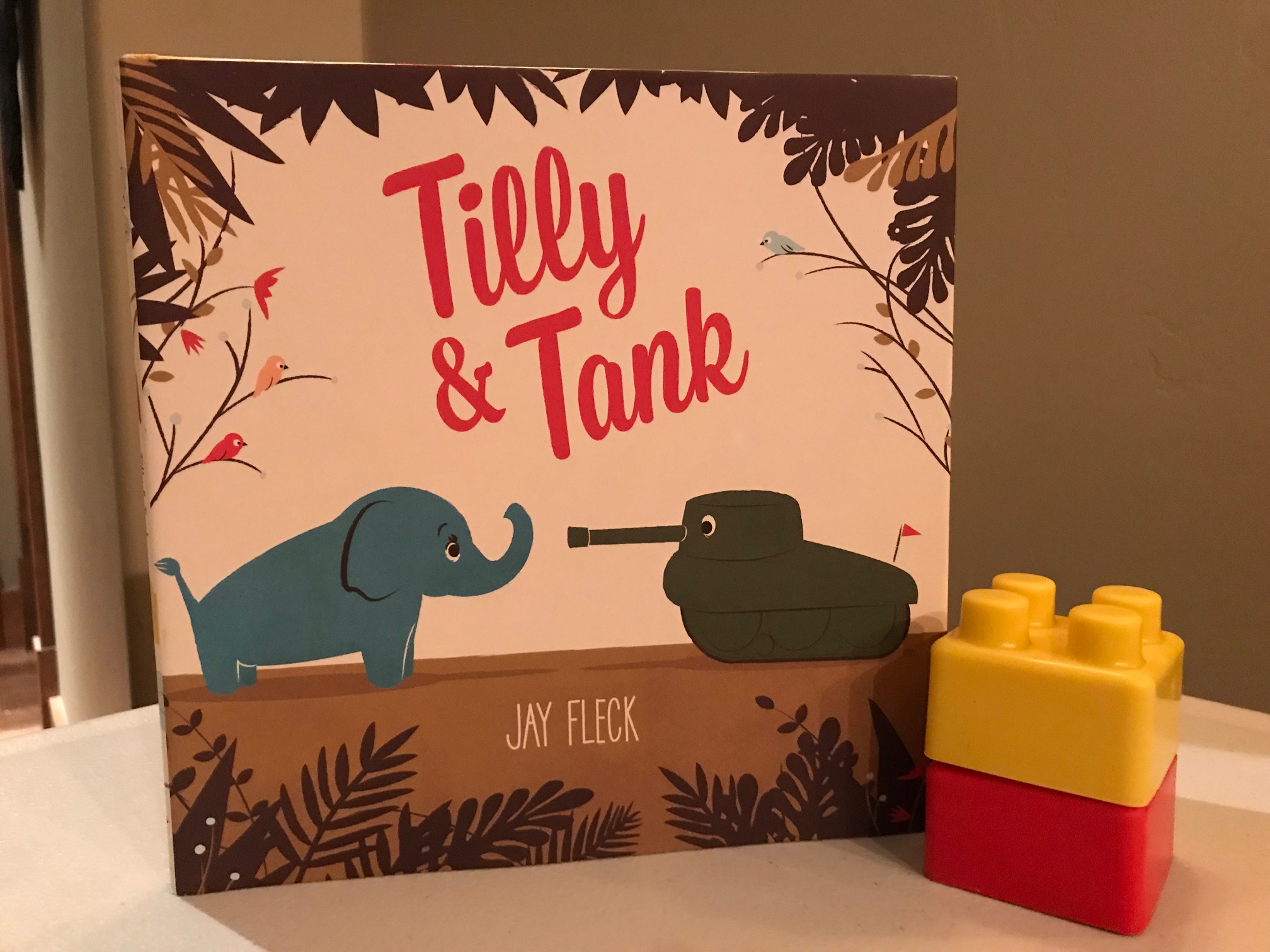 Ok I know what you’re thinking-where’s part one? I wrote a guest blog post for the not-for-profit organization Calgary Reads where I highlighted some new and notable picture books about kindness, and that was my part one. This post is my part two because you can’t have enough books about being kind to one another-especially these days!

Tilly and Tank written and illustrated by Jay Fleck is a beautifully illustrated book about an elephant (Tilly) and a tank. Tilly approaches Tank thinking she’s making a new friend, but Tank has been taught to be suspicious of everyone, so he shoots at Tilly and scares here away. After a few attempts Tilly is frightened away, but then Tank realizes he made a mistake and brings Tilly a bouquet of flowers to show he’s sorry and wants to be a friend.

This book has a really spectacular design-the colours and lines are reminiscent of the 70’s. In addition to it being pleasing to the eye, the story itself hinges on graphic design because Fleck has drawn the elephant and tank to have a similar shape. Because they look the same ‘on the outside’, Tilly assumes Tank is just like her, but she quickly learns this isn’t the case once his cannon comes out ( a severe miscalculation on her part, one would admit). But once they get past these differences, they find common ground so we get that happy ending we’re always looking for when reading books to kids of the 3-7 age group. There’s also a subtle nod to ‘making peace not war’ in this one, but I think most young kids wouldn’t really catch on to that, but the parents may so it’s worth a mention too.

I will say that the fact the storyline involves cannons, enemy fire, shooting etc. may make a few parents nervous about reading this to their children. I try to expose my kids to ideas in books first, because this opens up the opportunity for a useful discussion, but other adults may not feel the same way I do.

Next up is All of Us by Carin Berger. Now I really want to like this book because it has a lovely message of inclusivity, love, diversity and community building. But honestly, I don’t like it and neither does my daughter. The text is extremely limited, only a few words on each page, but together it just sounds like a bad poem without a regular rhyming scheme (at least if the rhyming was more regular my daughter would have enjoyed the rhythm, but alas, it lacks any kind of rhythm or pattern). The only saving grace of this book is the pictures; they’re extremely detailed, with the images being formed out of cut-out graphics from other places (paper collage art), so there’s little miniature text found throughout which is sort of intriguing to little ones, but it loses its novelty fast.

Lastly we have Trampoline Boy, written by Nan Forler and illustrated by Marion Arbona. Although this book wasn’t a favourite of ours, it certainly has its place in our library because unlike many children’s books, it’s quite open-ended and ripe for interpretation. It’s about a young boy, who remains nameless other than the nickname ‘trampoline boy’ because he loves bouncing on his trampoline; day, night, before and after school it’s where he spends all his free time. Many kids stand outside of his yard and mock him, while a young girl Peaches breaks from the crowd, decides to watch him for a few days then tells him she would like to see what he sees when he bounces up so high. The boy takes Peaches onto the trampoline and together they bounce into the sky, enjoying their new view.

There’s a few odd things about this book, like the fact the boy is never named, or that the pictures are very similar in many instances, or that the boy jumps so high he can see planes and birds in the air…but it all somehow works. As an adult I can appreciate the message of this book and the importance of discussing ‘perspectives’ with children but I’m not sure how well this translates to kids liking the book themselves. It’s entirely dependant on your own child’s interests whether or not they’ll connect with this one.

Ps-if you’re interested in learning more about Calgary Reads (and you should!) I visited their ‘reading place’ a few years ago and blogged about it here.