I haven’t read much Ruth Rendell in my day (in fact, this may be the first book of hers I’ve ever read!), but her name is always mentioned alongside other major mystery novelists, so I knew I was in a for a good read when I picked up No Man’s Nightingale. If you enjoy Peter Robinson mysteries, Rendell’s books are written along the same lines, although a little less gory and violent. Not quite a cozy mystery, Rendell’s latest book follows a retired police chief that goes by the name of Wexford. Apparently he’s appeared in many of Rendell’s books, because the cover states that this is an “Inspector Wexford novel”, so although he’s not officially part of the force anymore, he’s still solving crimes.

Rendell even looks like a mystery writer! In reality, she’s a nice old lady.

You don’t learn much about Wexford throughout the book, but I suspect that devout readers of Rendell would already have a pretty good idea of what kind of character he was.  He is particularly sensitive to racism in his community, and constantly brings attention to it (in his thoughts, and out loud) throughout this story. The murder being investigated is that of a female, Indian vicar, who stirred up many emotions in the small town of 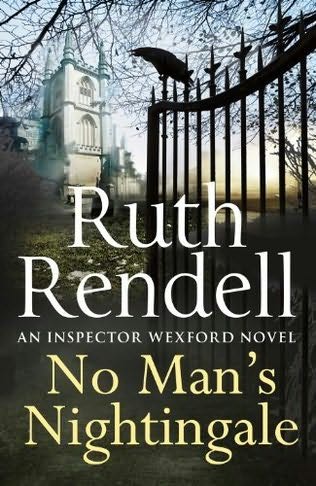 Kingsmarkham, simply because of the position she held as a woman. This resentment of course, is where many of the perceived motives of this crime lie. She’s strangled to death, but that’s not the only murder that occurs in the small town over the course of a few months, as the story unravels to involve more and more people.

As I’ve stated before in this blog, the success of a mystery novel will typically hinge on the character of the detective. Wexford has his own little quirks, but his personality hardly overshadows the plot line. It’s actually his relationships with other people that I found the most interesting. For example, his working relationship with Burden, (the police chief who replaced him) is full of contradictions; although Burden involves Wexford and gives him quite a bit of leeway in his current cases, he still dismisses Wexford’s opinions when they differ from his own, and Wexford is constantly trying to navigate the intricacies of being an ‘unpaid consultant’ to a police force.

in addition to this quirky friendship, many of the secondary characters are also well-developed in this novel: there is an old friend of the victim’s who weaves fabulous webs of lies to anyone who will listen; a mouthy housekeeper with a colorful family history, and a slovenly husband who will go to great lengths to avoid doing any kind of work. As you can see, characterization is truly where Rendell’s writing strength lies, although her plots are also solidly constructed and laid out. If you’re a lover of mysteries, you should definitely give this veteran crime writer a try.