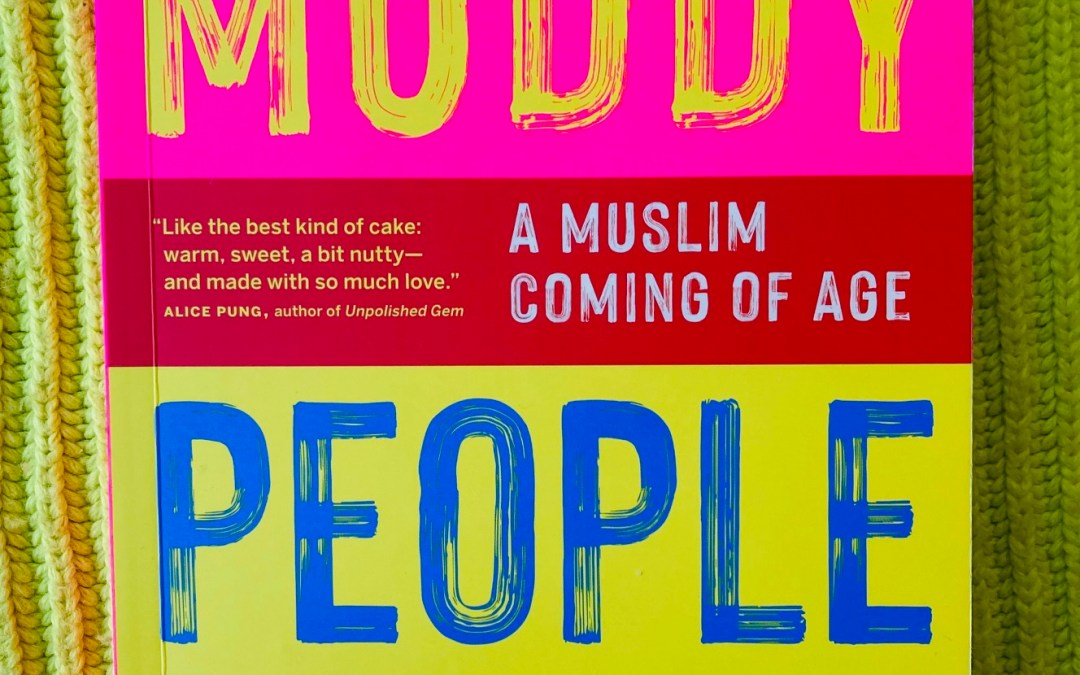 The bright colours of this cover initially drew me into reading Muddy People by Sara El Sayed. I was reading it at my hair appointment and even my hairdresser remarked on how beautiful it was – you just can’t help but like it! The cheerful colours may mislead some readers however, not everything is happy-go-lucky in this book. It’s a look at one of the most awkward times in a person’s life: the preteen and teenage years. Although it’s not a book meant for young adults (that I know of), reading it at a vulnerable age would likely help many teens, as they can no doubt relate to the swirl of emotions found on each page.

A memoir with the subtitle “A Muslim Coming of Age”, we quickly settle into life as Sara El Sayed. Born in Egypt, her family immigrates to Australia when she’s still fairly young, a place where her mother has spent a significant portion of her life but remains new and foreign to the rest of their family. Sayed’s father is hardworking and had a good job back in Egypt so he quickly finds a new job after they move, and the family settles into a sense of stability. Tension eases into her stories of her childhood through two avenues; first we jump back and forth between her youth and what is presumably the present day where she accompanies her father to his appointments treating his cancer, so we know he is divorced from her mother, and this puts a dark lens on her stories as a child because we know something bad is coming. There is also tension in the racism she experiences growing up in Australia – she’s hyper aware of how fuzzy her hair is, how dark her skin is, and how rigid some of the rules are that she must follow as the daughter of two strict parents, including not being allowed to wear tampons. Swimming and beach going being a large part of the culture there, you can imagine how difficult this would be for a teenage girl desperate to fit in. The book ends with her entering early adulthood, moving into a house of her own.

This book is full of contradictions. It doesn’t have a clear conflict and resolution that are surprisingly common even in memoirs, and there are no obvious changes or developments in Sayed’s character. Instead we see glimpses of her life; they are pivotal, but often conflicting and subtle, a realism often ignored in many life stories these days. Perhaps it’s because Sayed is still young, but I got the sense that this book is only the beginning of a lifelong effort to document her life.

Many of the contradictions come from Sayed’s relationship with Islam – likely a common theme for teens growing up in many religious households. On one hand, she relishes the acts of rebellion her and her mother display in their choice to not wear a hijab, even though her father clearly wishes they did:

“A strong nod, and a smile, as if to say, just so you know, I’m one of you too. Despite the exposed curly hair on the girl beside him. We made it harder for Baba to connect with his people. We knew this, and if we really wanted to, we could have made it easier. But I didn’t, and neither did Mama.”

On the other hand, when her Father has to explain that the Arabic word on her necklace says Allah on it, she’s ashamed of her lack of knowledge, of that word in particular. She also feels badly that her father donated much of his time in the building of a local mosque, while she readily admits to herself she would never be “as good a persona as he was” (p. 166). Sayed is painfully aware of how ignorant her father can be, how he has different standards for men and women in his life, but she remains preoccupied with playing the part of an obedient and honourable daughter.

The word ‘muddy’ comes up throughout the text, always meaning something different, but also always in relation to a person. Sayed’s skin is referred to as muddy, her relationship and life with her family is muddy, The rules that exist in her family are muddy. People external to Sayed see her as muddy, or call her muddy. Although it’s not as satisfying to read a book that doesn’t have a clear conclusion or message, it’s the most realistic, especially when talking about a life that’s only just beginning.