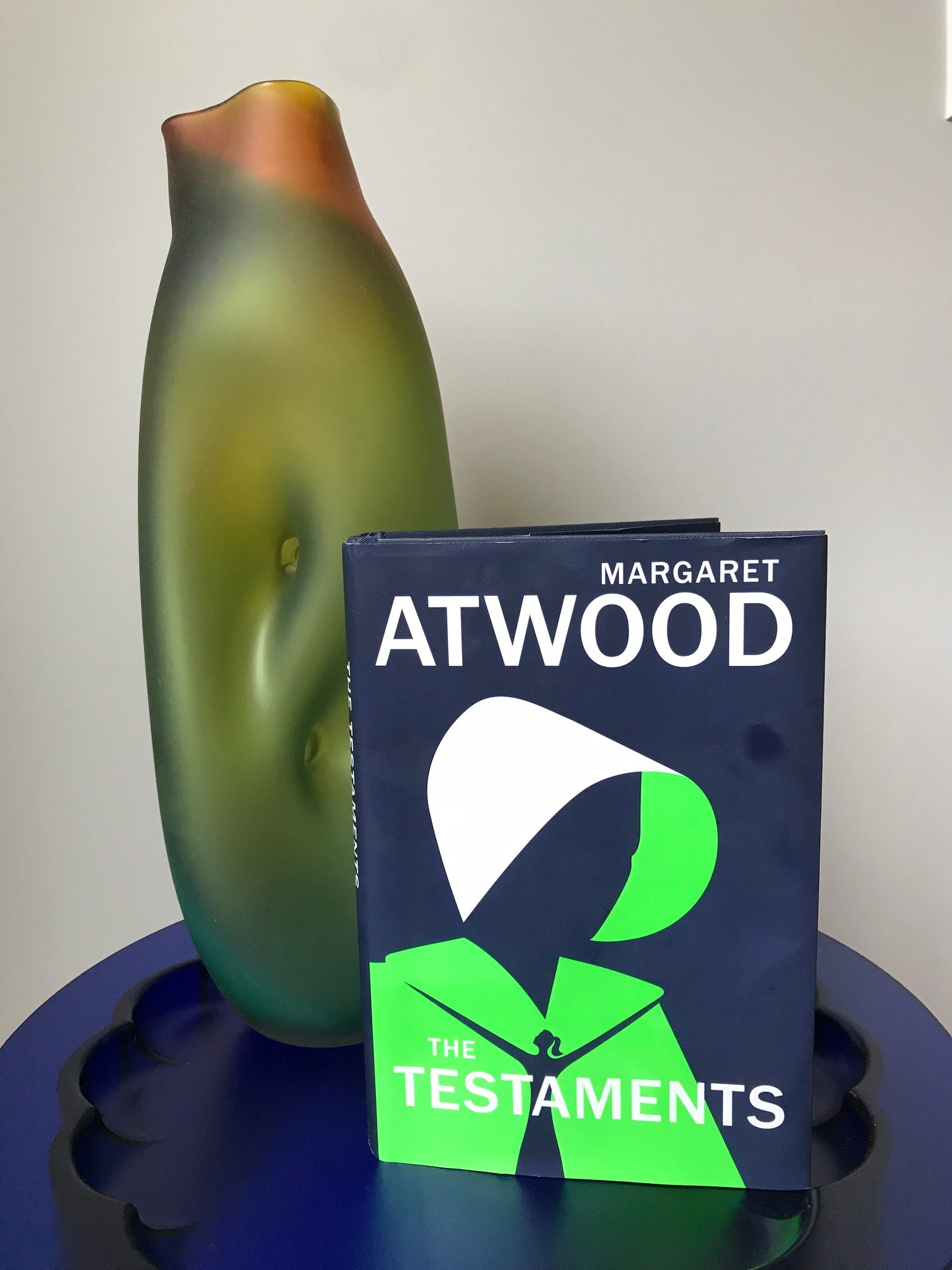 I wasn’t really planning on reading The Testaments by Margaret Atwood for a few reasons; it had been ages since I’d read The Handmaid’s Tale, I hadn’t seen the television adaptation of it, and I figured everyone else would be reading this book, so why should I? But then, I was offered the opportunity to record a book podcast for the Calgary Public Library (more info on that to come!) and my podcast partner and I thought a mega-bestseller would be the perfect novel to start with. I picked up The Testaments with a bit of skepticism, but I was completely blown away with how much I enjoyed it. Like a modern-day thriller without the cheap tricks, I couldn’t stop myself from reading ‘just one more chapter’. There’s a reason why Margaret Atwood is such a lauded writer, and her latest endeavor is just another example of her extraordinary talent.

This book is told from three different perspectives; one is Aunt Lydia, who appears to be the most powerful woman living in Gilead, the dystopian society that was introduced to us in The Handmaid’s Tale. Although the years aren’t explicitly stated, it’s understood that this society lives among us modern-day folk, maybe a few more years into the future, and it takes up a large swath of the (former) United States, centered in today’s Cambridge, Massachusetts. Even though she’s a founding member of Gilead, as a woman, Aunt Lydia has to be extremely careful what she says and does, because women have had all their rights taken away. She secretly writes her sections for us readers in hopes an explanation for her actions will live on once Gilead is destroyed.

The second perspective is from ‘Baby Nicole’, a young girl who was smuggled out of Gilead and grew up in Toronto to adoptive parents. She later learns of her real identity once her adoptive parents are murdered by Gilead fanatics as retribution for sheltering her. She is the most normalized of the characters as she has lived the majority of her life in our own society, more specifically, Toronto Canada. Lastly, we hear from Agnes Jemima, a young woman who grew up in Gilead within the upper class, destined to become a wife and not much more. As she ages, she becomes more and more disillusioned with her life, slowly realizing how limited her options are as a woman in Gilead.

What’s most fascinating about these books is that Atwood uses all real-life occurrences to form the basis of her plot. as she describes in the video clip above. Many will scoff at her predictions and connections, and I’ll be honest, some of her writing can veer further into science-fiction than I’m comfortable with. But listening to her speak will quickly change your mind, as the horrors of Gilead are easy to imagine, especially for those who don’t enjoy equal rights in 2019, which unfortunately, is still quite a few people. So although it’s scary to admit, this book seems closer to reality than much of the dystopian fiction currently filling our bookshelves.

No doubt this book would have been even more enjoyable to read if I had re-read the Handmaid’s Tale right before it, but even for someone who doesn’t remember it well (I read the summary of The Handmaid’s Tale on Wikipedia, and it almost convinced me I hadn’t read the book at all because it didn’t sound familiar) its sequel The Testaments was still highly entertaining. Through its alternate perspectives, it explains how some at the top came to be there, what drove some of the horrific actions we come to learn about, what it’s like to live outside Gilead, and how the rest of the world views it. This reminded me of how we tend to view North Korea these days; we know there are horrible things going on there, some people escape and have frightening stories to tell, and yet, we live alongside it, feeling helpless to stop the shadowy atrocities we do know of, relying on governments to enact political sanctions that we don’t understand.

What Atwood does best in this novel is explain the un-explainable. Instead of letting us readers sit comfortably in the idea that Gilead could never happen here, she breaks down the barriers between black and white, drawing parallels between the ‘good’ and ‘bad’ characters in an effort to show the readers how easily one can slip into either camp. Now that I’ve had a few days to think about it, ‘chilling’ is the best word to describe how I felt about this book. But regardless of how uncomfortable it made me, this book comes highly, highly recommended.