Book Review: In the Unlikely Event by Judy Blume

So, I saw that Judy Blume had a new book coming, and of course I jumped at the chance to review it. Who wouldn’t? It’s Judy Freaking Blume! I didn’t read the premise of the book at all, hell I didn’t even look at the cover. I just said “Yes, please send it to me”. And then, I saw it on my to-read shelf at home, and immediately took it off my bookshelf thinking “Yes, it will be great to finish this book before I go on my trip home, because it’s hardcover, and I don’t want to pack it in my luggage, and I really want to read it now, so I’ll just crack it open today!” I didn’t even clue into the fact that the book was about plane crashes until I started reading the first page. Geez, do I have terrible timing or what?

No one likes reading about terrible senseless tragedies like plane crashes, especially because flying is something many people do numerous times a year. People who are nervous fliers like me? They definitely don’t like reading about plane crashes, and yet Judy Blume has written about plane crashes, and it’s her first book in a long time, so you can see the conundrum I was in. Not wanting fear to control my life, and/or my reading choices, I soldiered on through In the Unlikely Event, even though I’m a nervous flier, and  hopping on a plane in a few days. I wanted to include this long introduction to my review to make it clear that I am commenting on this book as a nervous flier, so keep that in mind.

The book starts off with a very nervous woman about to board a plane, and then jumps back thirty five years before that to describe the fateful year that is responsible for this woman’s anxiety. Based on true events, there were three plane crashes in Elizabeth New Jersey over a three month period, which Judy Blume experienced herself, as she grew up in Elizabeth. Miri, the protagonist is the woman who we follow back into her childhood to experience this terrible year firsthand. 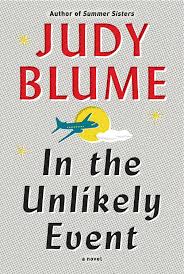 My love of Miri is what kept me turning the pages of this book. This is the power of a Judy Blume book. I was reading about literally my worst nightmare, but I was still able to enjoy the story, and felt better, not worse about flying once I finished it. To Blume’s credit, she describes flights that are perfectly safe alongside the tragic ones, which seemed to alleviate my anxiety quite a bit. But the characters themselves are what kept me going back. Miri is such a well developed character, I felt like she was a real person that I could know, or relate to in my own life. Her thoughts, emotions and actions did not always reflect one another, which made her such an interesting, and believable person. Blume excels at drawing us into the lives of people that we are introduced to in only a few pages before they perish in a crash. And yet, although we’ve only known them for a few paragraphs, we mourn them just like their fictional families and friends.

The only problem I did have with the book was the number of characters introduced. I would have liked to have gotten to know a few of them better, and I lost track of similar-sounding names a few times. Some may say that’s the fault of the reader and not the author, but I hate when too many people are needlessly described, it can take away from the impact of the other, more important central characters.

Anyway, this book is well worth the read. Plane lovers should rush out and buy it in the hardcover. Nervous nellies like myself can wait for the paperback.