I’ve had Nora Webster by Colm Tóibín on my bookshelf for awhile; it was published in October 2014, which is when I received it for review. I don’t have a great excuse for not reading it until now, other than the fact that I had never read a Colm Tóibín book before so I didn’t know what I was missing…until now! 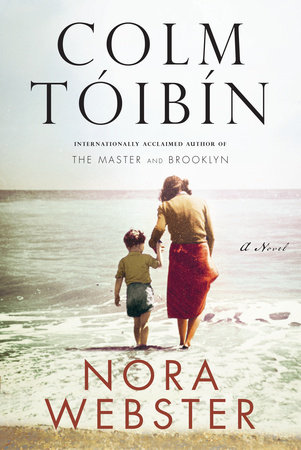 This book was what I would commonly refer to as very ‘literary’. To many, this sounds like it would be boring, but for my book-loving friends, they would probably see it more as a challenge. It’s literary in the sense that not a lot happens in it, much of the plot takes place in Nora Webster’s head. In fact, the book begins right after one would typically think a story should climax : a death. Nora’s loving husband Maurice has just died, and she is struggling to imagine her life without him, burdened with the care of their four children on her own.

Luckily, Nora is a character of contrasts, which keeps this book from falling into ‘boring’ territory for me. She’s a mother of four, yet her motherly instincts seem rusty, or in some cases, completely non-existent. At one point, it occurs to her that she’s never considered whether or not her one son has been happy or not. To a mother of an 8-month old baby, I found this shocking! Not that I’m going to win mother of the year anytime soon, but generally the happiness of your child is something that typically crosses your mind at least once or twice a day. However Nora has suffered such a devastating loss, that the reader can only assume she’s no longer thinking clearly. But the great mystery of Nora as a character is that we meet her after this loss, so we don’t really know what she was like before Maurice died. Was she a doting mother who thought of her children constantly? We never know, but we hear from her friends and family quite a bit on this matter.

Nora struggles not only with her new responsibilities, but with the opinions and comments from other people. She dreads having to host people in her home, and she impatiently tries to rid her house of guests whenever possible. Living in a small town makes this difficult of course, so we are constantly observing Nora’s discomfort with those around her, and her paranoia of what they think of her. But it’s not all a depressing meditation on widowhood; Nora begins to change, rediscovering her old love of music, and connecting with people new and old in an attempt to enjoy her new life.

So yes, not a lot of exciting things happen in this book, Tóibín forces us to focus foremost on the inner life of Nora. But it’s worth the effort to shut out the typical day-to-day occurrences in order to better understand and enjoy this fruitful study in character…it’s a page-turner for us literary folk.