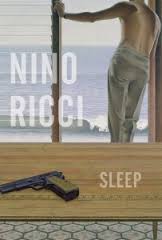 Sleep. I’m obsessed with it since having a baby. How much am I getting? How much is my baby getting? Is it enough? Is it too much? Is it at the right times of day? When will I ever be able to sleep in again? Probably never, but a girl can dream (pun intended).

How awesome is this book cover?

So finding a book titled Sleep, with a premise about a man who never gets any sleep, seemed a fitting read for this time in my life. The acclaimed Canadian author Nino Ricci is the author, so I knew it would be worthwhile too. I wasn’t wrong, it surprised me with numerous plot twists, and the book had an explosive, action-packed ending, which you would never have suspected based on the somewhat dull beginning.

David is an academic with a wife, son, and successful career; but he is diagnosed with a sleep disorder, and his life slowly begins to crumble beneath him. Although the narrative is described as revolving around David’s lack of sleep, it’s

more about his developing addiction to drugs as he attempts (in vain) to control his disease. This descent reminded me of Russell Smith’s book Girl Crazy, where his protagonist (also male) falls in love with a woman and slowly falls into a world of violence, drug use and casual sex. In Ricci’s book, once drugs begin to fail him, David turns to the thrill of shooting guns (while on drugs) to give him a sense of wakefulness. Obviously, this puts his career and family in jeopardy.

So Ricci has accomplished something of note here; he’s managed to write a story that is at once intelligent and descriptive, yet fast-paced and shocking. Sex, drugs, and violence mingle with cultural expectations and character studies, keeping the reader entertained and challenged simultaneously.  Read a book that will keep you up at night, and keep you from sleep: pick up Ricci’s latest at your local, independent book store.