Is this book literary? Yes. Is this book a thriller? Yes, of sorts. Is this book a worthwhile piece of historical fiction? Definitely! The Butcher’s Hook by Janet Ellis is a lot of different things, it’s very unique in so many ways that it will appeal to many different audiences. But before I get into all the reasons I loved it, I wanted to state a few things up front. 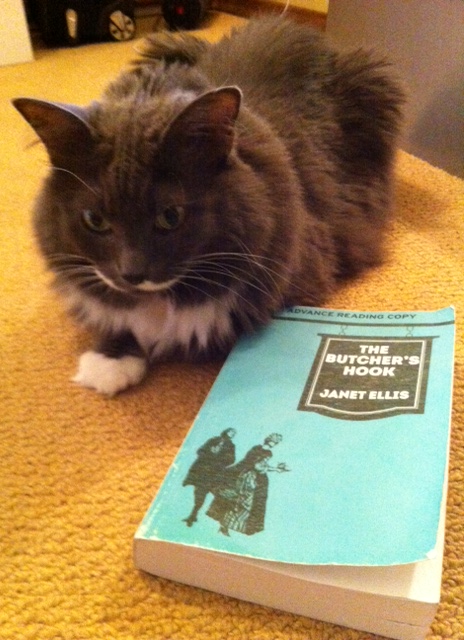 The suspense of this book really kept Smokey on her paws

Ellis still has some work to do in her plot development, I found the book to move a bit slow at the beginning, but the dangling of the protagonist’s misdeeds to come was enough to keep me going. Also, a few of the scenes were a bit repetitive, it seemed as though the same things were happening over and over again, so the lack of action needed some extra attention as well. However, even with these faults, The Butcher’s Hook is worth your time, and here’s why;

“His fingers trail over the book, stroking the patterned page as a snail marks its path with slime.” (p. 96)

“Hearing him speak is like stepping barefoot on a slug” (p. 107)

I absolutely loved Ellis’s writing. Just by quoting those two lines above, I’m sure you can see why: how perfectly she has evoked this terrible character Onions! The protagonist Anne is a fiery young woman whose terrible merchant father has promised her to Onions, an older, disgusting man who is well-placed to be a socially acceptable husband. However, Anne has fallen in very passionate love with the butcher’s boy Fub. As the novel progresses, the reader quickly realizes that Anne is capable of more than you initially think, and she will literally stop at nothing to make sure Fub is hers alone. Dum Dum Dummmmmmmmm… (insert scary piano music here).

Anne is the other reason this is such a great book, and not just because she has the greatest name in the world. (I was hoping to use that joke on air last week, but I didn’t get the chance, so it gives me great pleasure to use it here). She is probably one of my favourite fictional characters I’ve read this year. She’s sassy, intelligent, and doesn’t suffer fools. For those of you who have read the wonderful Flavia de Luce series, she’s like Flavia, but grown up, and kind of evil. For those of you who have no idea who Flavia de Luce is, just trust me on this one, you’ll love Anne, and you’ll love The Butcher’s Hook.