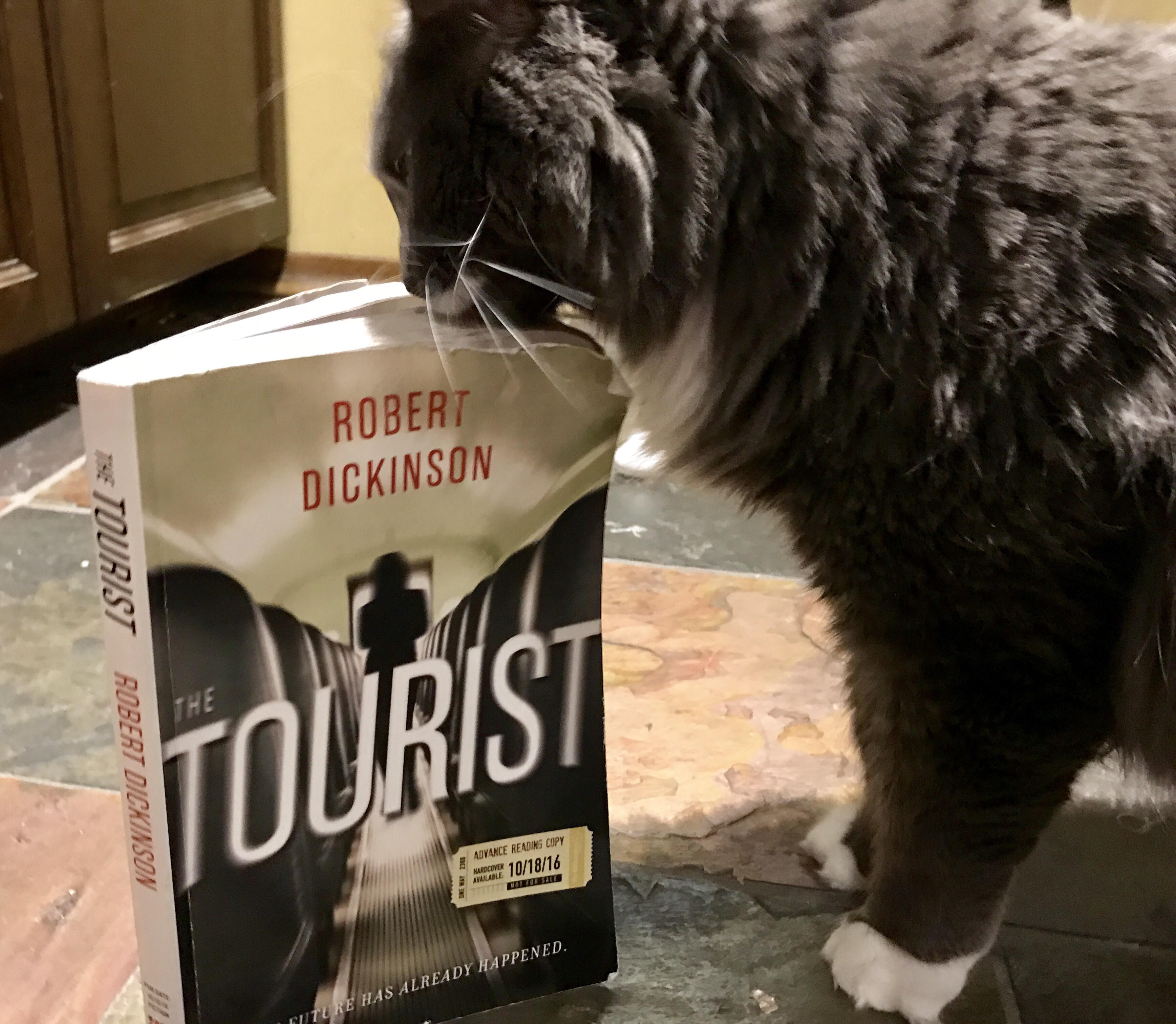 When we look at the covers of books, we sometimes see what we want to, and conveniently overlook the things we don’t. Unfortunately this happens to me often because I do things quickly, sometimes too quickly, so I frequently miss things. My most recent example: not noticing that The Tourist by Robert Dickinson is a science fiction novel that takes place in the future. I thought it was a thriller, one that would involve a bus trip gone awry from an all-inclusive resort somewhere down south. I was pretty far off.

We begin with a scene in a prison, where the criminal is being given a special offer to leave for a little while and return to her hometown. Then, we skip to a different story line that involves a young man named Spens who is a tour guide for a  travel company who gives people the chance to visit the past (yes, they travel through time as a vacation). His problem is that when he most recently brought a tour back to the resort one of his clients was missing.The action of the novel is essentially surrounding this woman; who she is, why she disappeared, where she is now, etc.

I think the premise of returning to our present but ‘their’ past is a really clever spin on science fiction because it leaves no shortage of room for Dickinson to weave in his own social commentary, apocalyptic scenarios and predictions about the future. So once I understood we were visiting the 21st century, and seeing it through the eyes of people who lived in the 25th century, I immediately became excited. Yes, I don’t like science fiction, but this seemed like it would be a detective novel set in the present with some weird futuristic characters, so I persevered.

I never regret reading a book to the end, even if I didn’t like it. Writing a book is an accomplishment, and I feel like I’m honoring that effort (in my own small way) when I read through it all. I’ll admit that was the only motivation keeping me going through this book, that and a glimmer of hope that everything would make sense by the end. It didn’t. And I know I’m not the only person who felt this way, many readers were confused based on the quick google search I did. First off, the time travel made things very confusing, because we were constantly going back and forth through time, and it was never clear which way we were going. Secondly, the characterization was weak- it was often unclear who was talking because names were hardly used, and it wasn’t obvious whose perspective we were in based on the circumstances. So, despite a promising setting and conflict, this book just didn’t deliver.