I’m writing this review in December 2014, although I don’t expect to post this until April 2015 or later (side note; my predictions were correct, as I’m posting this on May 21!) The wait is due to the fact that I’ve read Wes Side Story as part of a judging panel that I’m participating in for the Saskatchewan Book Awards, and I can’t post my opinions of the books I’ve read until after the awards have been given out. However,  I strongly believe it’s always best to review books right after you’ve read them, as they are always freshest in your mind at that point, which is why I’m writing this now. 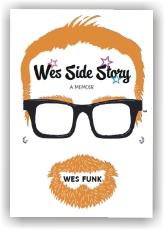 Admittedly, I had never heard of Wes Funk before, although it seems he has received some substantial success in Saskatchewan and other parts of the country. According to his biography, he hosts a literary-themed TV program called Lit Happens, and has also won a CBC Bookie award, which is no small feat. Wes Side Story is a memoir, which is a genre I really enjoy reading: especially when it’s about a Canadian author struggling to build a career in the literary community of Canada, because I have so many friends in the same position and industry. The video below is a clip of Lit Happens with the wonderful Albertan author Rosemary Nixon.

I will say that I was a bit wary of this book, mainly because it is self-published, along with the rest of Funk’s work. He doesn’t address self-publishing directly in this memoir, but his website states that he does many workshops about the topic, so I don’t doubt he’s a champion of the process. Coming from a traditional publishing background, it’s hard for me to enthusiastically support authors self-publishing work in hopes of achieving literary fame, but I will support the act of self-publishing if the intention is to simply ‘get one’s story out’. However, this book focuses more on Funk’s life and his job as a by-product of his upbringing, which I found fascinating. It’s also very inspirational; Funk went through lots of up and downs in his life, he readily admits that he suffered from depression at times, but he found his way through the dark times on his own, and that’s something he can truly be proud of. So, if this book sounds of interest to you, I recommend picking it up. It’s well written, and quite fun, as you get a truthful glimpse into someone’s life: the good and the bad.