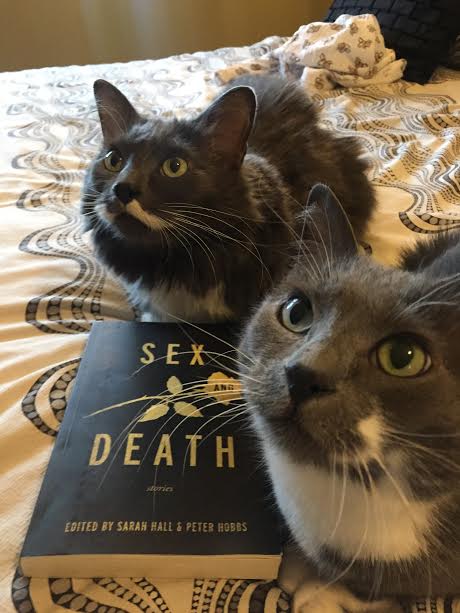 I find short story collections extremely hard to review, but this is the case even more so when the collection of stories is an anthology made up of various authors because there is such a huge span of talent and writing throughout. Sex and Death, edited by Sarah Hall and Peter Hobbs is an incredibly varied grouping of stories all about how we come into this world, and how we go out. Yes, the topics are somewhat similar, but each artist has their own take on what sex and death means (as they rightly should) so we’ve got a mixed bag of treats with this one. We’ve got stories about loved ones recently deceased, a woman developing a sex addiction because of a growing tumor in her brain, even a tale of a new mom agonizing over a recently developed anal fissure shortly after her baby’s birth (!!!).  There is literally, something for everyone.

My favourite story was oddly titled “Porto Baso Scale Modellers” by Alan Warner, which was one of the most clever and hilarious things I have read in some time. It’s about a group of middle aged men who take their hobby of assembling miniature models of planes very seriously, and a gorgeous, sex-addicted woman joins their group because she has a remarkable talent for their nerdy little endeavor. I could read this story over and over again I loved it so much. And many other stories were very well-written, “The Postcard” by Wells Tower in particular had some beautiful turns of phrase, this one stuck out for me:

“Still, she had wished she had not heard the story, which was like a giant crystal chandelier Clement had put into her hands with instructions to never set it down” (p. 70).

Despite the above stories mentioned, I can’t say I really loved this book. Many of the stories were unremarkable, things I just wanted to get through until I was done the book. I really enjoyed a few of the stories, and disliked or was bored by many others. Even the Canadian contributions to this international collection let me down, which I’m ashamed to write, but would feel untruthful if I didn’t mention.

Many people shy away from short story collections, and now I think I see why. Once you’ve finished reading all the stories, you don’t get the satisfaction of having completed a novel, even if you didn’t really like it. I don’t want to say reading this was a waste of time because I discovered some authors I would have never know about, but I think the collection could have done with a more discerning edit.