Valentine’s Day Reads for You and Your Little 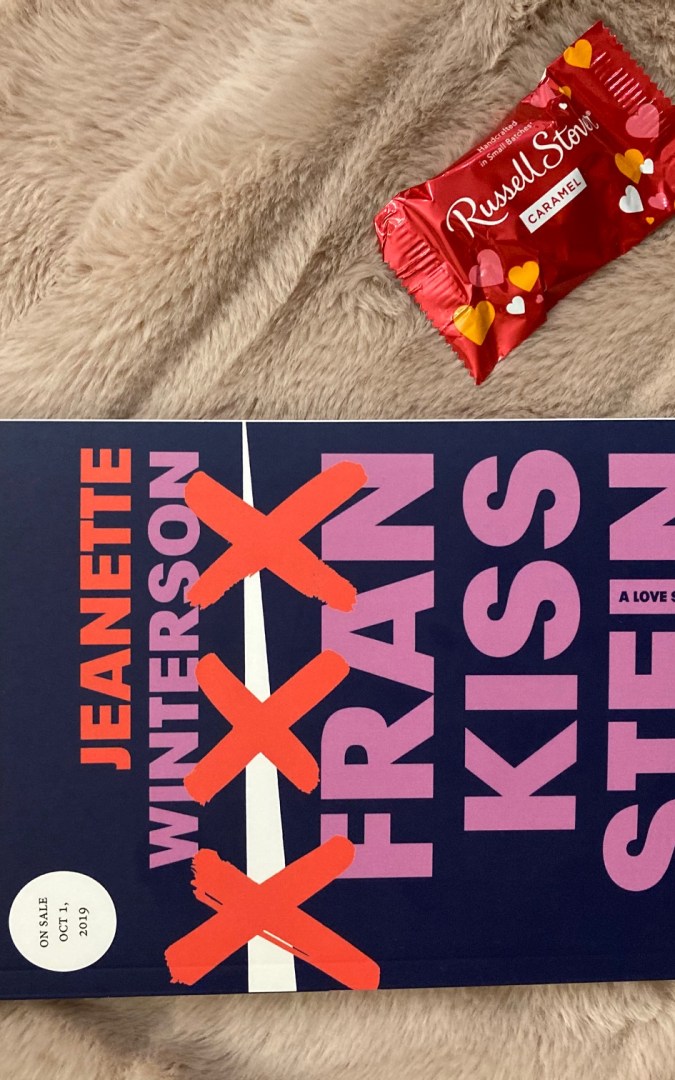 Valentine’s Day is no doubt going to look a little different for many this year, and for me especially this is going to become a family holiday more than it ever has in the past, because what else am I going to do on a freezing-cold Sunday in the house with my kids? Plus, having a Valentine’s Day party is the perfect way to break up the winter blahs, and if it’s happening in my house, you can guarantee books will be a part of it. I’ve chosen two books to review; one for adults (and believe me, this is a very adult only book) and one for kids.

Frankissstein by Jeanette Winterson is a hybrid holiday novel; originally pitched to me as Halloween book, it has sat on my shelf for well over a year, but now that I’ve read it, I realize it’s much more suited to Valentine’s Day, because at its heart is life and love. It’s a really difficult book to describe because there are dual storylines that never really intersect, yet inform the way we read the other. We begin with Mary Shelley in 1816, that fateful summer when she writes her infamous book Frankenstein. She’s lazing around a castle with some friends, stuck inside because of the endless rain when she begins her story. We then fast forward to present-ish day, and our second protagonist, Ry, short for Mary (last name also Shelley), is a transgendered doctor attending a Tec-X-Po. Ry also happens to be very good friends with the famous scientist Victor Stein who is studying the next form of artificial intelligence, essentially the thoughts and feelings downloaded from everyone’s brains after they die. See where this is going? The Past bleeds into the Future, yet the themes remain the same. The dialogue in fact, remains eerily similar between characters too, even though centuries separate them. As the book continues, the line blurs even further when the story switches between timelines on the same page, demarcated only by a new paragraph.

Even though the debate of ‘what constitutes life’ is the main one addressed by the book, one must also touch upon the rights of those that are living to arrive at a more fulsome answer. 1800’s Shelley is well aware of her lack of rights as a woman, espeically when it comes to her desire for motherhood, and then modern-day Shelley experiences a sexual assault when a drunk man discovers her in the men’s bathroom and tries to punish her for using a stall. The parallels between the two Marys are painfully obvious when both are simply trying to go about their own lives, lacking the basic human rights afforded to those around them.

This may seem at odds with the serious subject matter but Frankissstein is written with a sharp sense of humour. One of my favourite characters is in the modern storyline: Ron, an inventor of an extremely successful line of sex-bots that have made him incredibly rich. Surrounded by philosophers and scientists, his blunt and chauvinistic comments act as a dose of reality, and he frequently finds himself in the role of the everyman, questioning the academic-based assumptions that the people around him are making.

On the cover of Frankissstein, it proudly proclaims this book a love story, but here, love is applied to both a romantic feeling between two people, and sex. Sex is analyzed through a few lenses; power, procreation, and pastime. Ron argues that when robots are able to do everything for us, we will all be having more sex, because there’s less work for us to. Ry has taken control of their sexual identity by beginning a gender transition, and the modern-day Victor uses sex as a weapon. 1816 Shelley is confined by the sex she has, after losing three children, one after the other, as infants. Thought-provoking above all, I recommend this book to someone with an open mind, and a willingness to dream about the future.

Speaking of thought-provoking, I find this picture book contains one of the most nuanced messages I’ve read in a long time. The Boy Who Loved Everyone by Jane Porter, illustrated by Maisie Paradise Shearring is about Dimitri, a young boy who starts preschool and loudly proclaims “I love you” to just about everyone and everything; his teachers, his classmates, the birds in the trees, even his paintbrushes. The kids in his class think he’s weird for declaring his love all the time, so instead of responding they just giggle and walk away. The next morning Dimitri tells his Mom he doesn’t want to go back to preschool because no one said they loved him, and she explains to him that people have different ways of expressing their feelings. Kind words, hugs, even smiles can be their way of saying “I love you” back.

Does this not sound like the most heartwarming book ever? I couldn’t help but smile when I read this out loud to my kids because Dimitri’s unabashed passion for everything is such an uplifting storyline to experience. It’s also an important lesson for everyone; so many adults forget that everyone has their own unique love language, and it’s never beneficial to assume you know how someone else feels about you based on one particular reaction or non-reaction. A powerful form of self-expression like this is something we aren’t used to facing every day so we all struggle with the most appropriate way to react to it. This is a quiet and introspective story that may not get the same laughs toilet humour will, but it’s a nice addition to any child’s collection nonetheless.