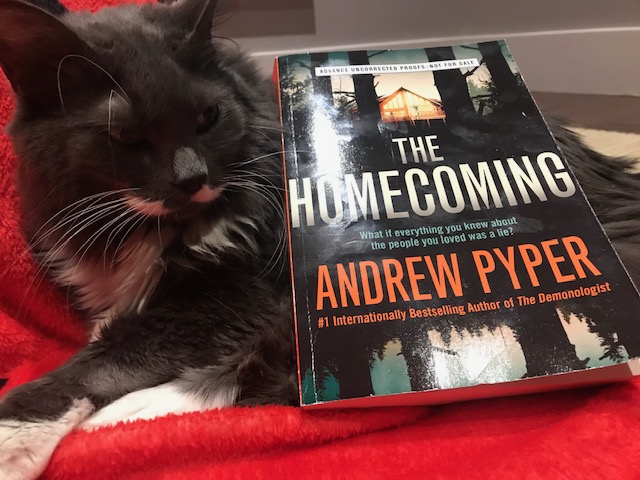 I’m always a bit hesitant to embark on a horror novel (or movie) because I have such high expectations for the genre, and I’m frequently disappointed. Too often, the storyline starts off scary then just dissolves into a weird, over-the-top mess that’s so unbelievable it’s humorous. Canada doesn’t have many horror writers either, so I don’t often have the opportunity to read a good scare-your-socks-off story, (Nick Cutter is one that immediately comes to mind, although I’m hard-pressed to think of another). Luckily, I’ve found a writer I can rely on for genuinely scary stories that calls Canada home, and that writer is Andrew Pyper.

Pyper’s latest book The Homecoming is creepy as all hell and it stays that way until the very last page. We meet a family who has just lost their patriarch so they’re called to their father’s secret estate “Belfountain” to hear his will formally read. This place is extremely isolated, a giant luxurious cabin set on hundreds of acres of rainforest, surrounded by barbed wire. In order to lay claim to their portion of inheritance, they must all remain on the estate, with no contact to the outside world for 30 days. It’s weird, but then circumstances take a turn for the worst when a few more characters show up, especially when the new arrivals don’t have the most positive of intentions.

The setting is perfect; aside from a haunted house, you can’t go wrong with a never-ending forest, it has unlimited potential of hiding your worst fears. Did you think Blair Witch Project was scary? I sure did, which is why this environment wupped the fear factor for me. The characters we are introduced to seem nice enough, especially the widow, mainly because her husband was an asshole who kept a bunch of secrets from her, so we are immediately drawn into the human side of this story. There’s definitely some strange things about each family member too, but we’re much more likely to trust them than the recently-deceased Father, so our alliances are drawn shortly after the will is revealed.

I can’t give much more of the plot away without revealing some major twists (and there definitely are some!) but these twists aren’t gimmicky, they keep the story moving forward instead of ‘tricking’ the reader. The nature of the horror is genuine, and Pyper plays on classic but not over-used scare tactics to keep us on our toes. The chapters are super short and easy to blow through, and I was so desperate to put together the puzzle pieces that I read this book in just a few large chunks because it was next-to-impossible to put down.

One of my favourite parts about the story is the aftermath-Pyper offers us an opening to an entirely different story; a continuation of sorts, but in a completely new direction and genre. This little extra is something he didn’t have to do, but it added to my opinion of the whole book immensely because it’s obvious he’s going the extra mile. Too often authors write in a major twist and then give up in keeping the reader interested. In these cases, reading through to the end is almost a chore because no one cares about what happens after-the twist has occurred and the rest of the plot is just filler, but Pyper has done exactly the opposite of that, and I really appreciated it. Highly recommended for all these reasons and more.