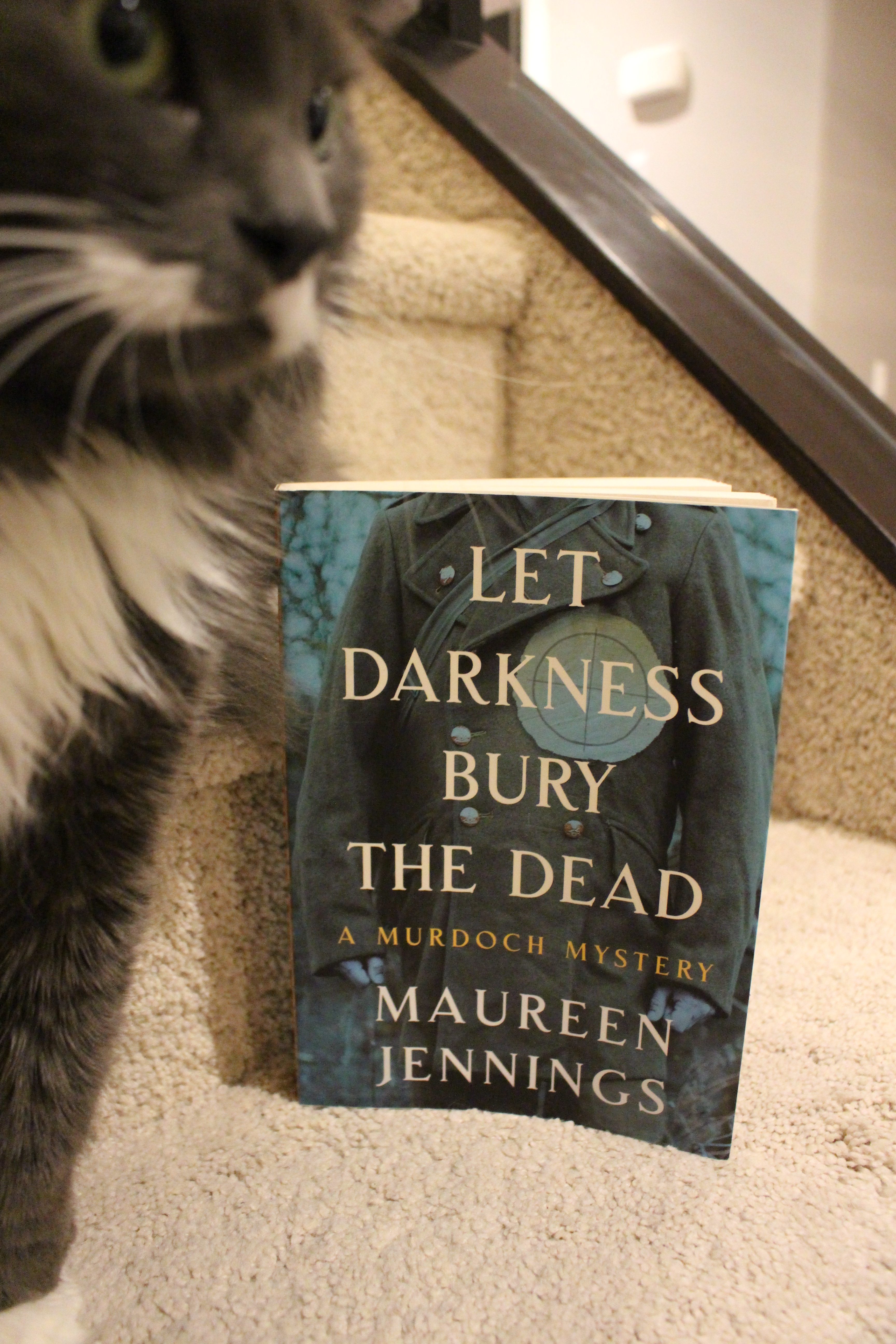 So I’ve never really watched the television show Murdoch Mysteries, but of course being Canadian and a long-time devotee of the CBC I had certainly heard about it, so it’s definitely on my Netflix list of ‘to be watched’. Because of this, when I was given the chance to review a forthcoming Murdoch Mystery book from the author Maureen Jennings (who has written the entire series the television show is based on) I jumped at the chance, and was not disappointed.

Let Darkness Bury the Dead takes place in 1917, which is a few decades later than  the the time period the television show takes place within. Murdoch’s son Jack has just returned from fighting in France with a wounded arm, and he’s clearly suffering from PTSD when he arrives home in Toronto. Protagonist and Senior Detective Murdoch understands Jack needs time to mentally rest and recover, but strange connections begin to emerge between Jack and the current murder cases that Murdoch is focusing on. It doesn’t help that Jack’s friend Percy is clearly addicted to opium, finding refuge from his war-addled brain in the darkest parts of the city with Jack by his side. Torn between wanting to be an understanding father to his son and rooting out the murderer(s?) running amok in his district, Murdoch Sr. finds himself in a difficult position, made even more challenging by the fact that he’s a single father, having lost his wife when Jack was just four years old.

Jennings is clearly an adept mystery writer-she wouldn’t be this successful otherwise. The pacing of the mystery unfolding was close to perfect, and she included enough side stories to make the characters come alive. There’s a love interest for Murdoch (of course!), and we learn a bit more about his softer side when faced with the ravages of poverty during WWI, which seems to be upset him more than the crimes themselves-injustice is clearly Murdoch’s pet peeve, which of course makes him that much more likeable. Unlike most famous literary detectives, Murdoch doesn’t have any obvious personality issues or quirks, at least none that I could discern in just this one novel-perhaps frequent readers of Jennings’ books could tell me otherwise in the comment section below? Murdoch has got to have some skeletons in his closet!

I’m having trouble finding anything critical to say about this book because I so thoroughly enjoyed it. There weren’t any cliches, and it provided me a great couple days of escapism from some of the overly-serious books I’ve found myself reading lately. I wouldn’t call this ‘fluff’ though, it provided some unique insight into this time period with a few historical pieces taken from the author’s research (as per her author’s note at the end of the book). For instance, Jennings included an ‘official post card’ that soldiers were able to fill out and send back home as they fought overseas. These postcards were basically fill-in-the-blank documents, which obviously speaks volumes about the censorship applied to all correspondence at that time. Depressing for soldiers and their families for sure, but very cool for modern day readers to see! For all these reasons, I’ll be keeping an eager eye out for Jenning’s next work, no doubt dipping into her backlist in the meantime.