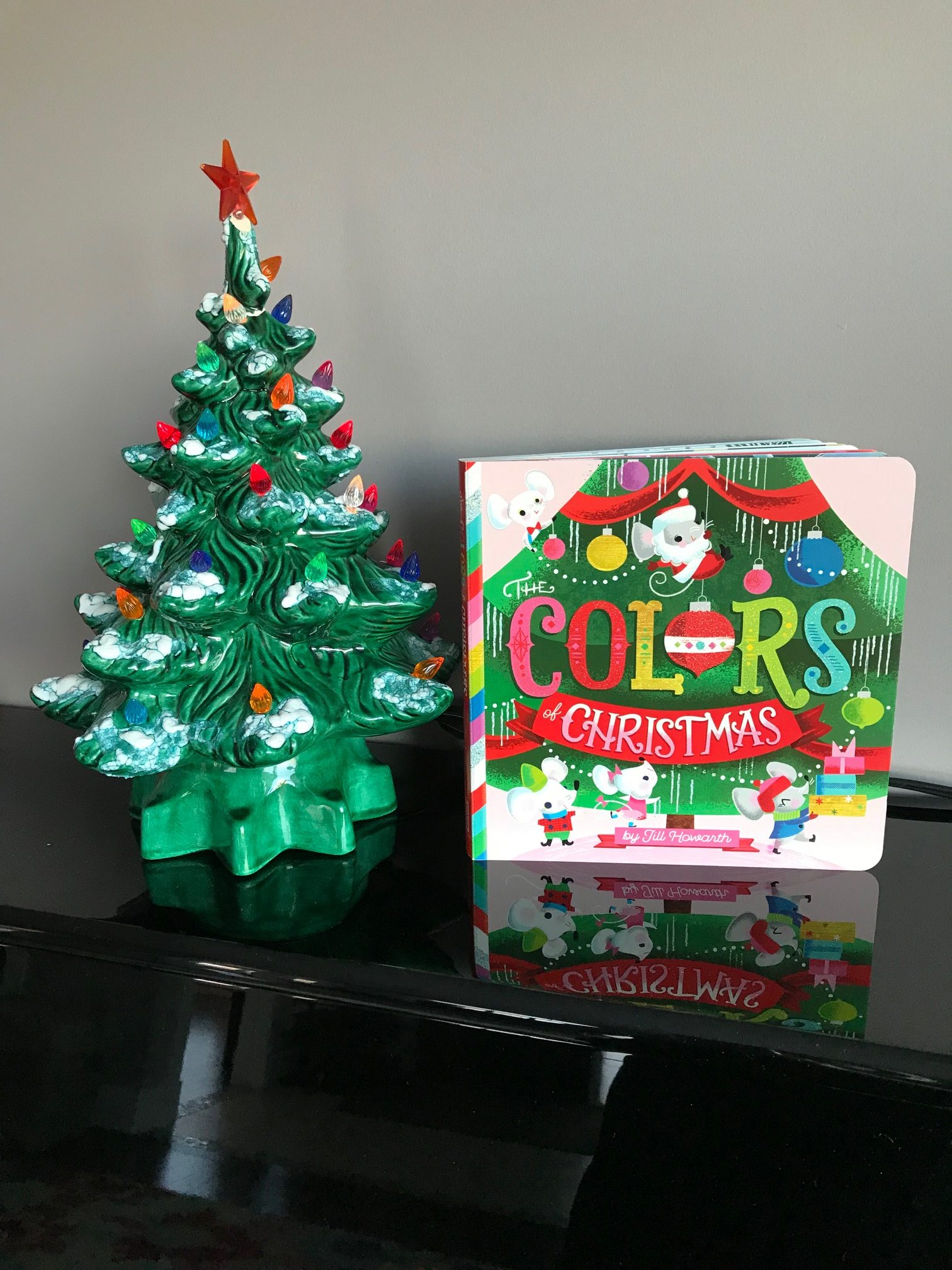 What do you do with your holiday books between January and November? Do they live on your bookshelf with your other kids books, or are you like me and pack them away with your decorations, ready to be discovered each year? It may seem like a strange habit to get into, but because we have so many picture books in our home (one of the hazards of having a book reviewer in the house) it’s an easy way of keeping our shelves a little tidier. I do this with all our books, even the board books, because it’s exciting for little little ones to have ‘new’ books to look at, even if they’ve graduated to actual paper-based books in the meantime. Below I’ll review one ‘box’ and two board books that are durable enough to be stuffed in with your wreaths, candles and bells year after year.

We’ll start with the book meant for the babies-a true board book, with very little text on each page. The Colors of Christmas by Jill Howarth (pictured above and beside) features a different color* on each page, and rhyming text along the bottom which includes a reference to the featured color:

“Red is the color of Christmas joy, Santa’s suit and wonderful toys!”

According to the blurb on the back, the setting for this book is ‘mouseville’, which checks out because each picture features a bunch of mice preparing for Christmas. Although the idea of mice celebrating Christmas may elicit a few furrowed brows from parents, my kids saw nothing strange about little rodents hanging tinsel and wrapping presents so they enjoyed the story as much as expected. Did I mention there are sparkles on the front cover? That’s always a favorite in our house, but there was a distinct lack of sparkles on the pages describing silver and gold, which was a disappointment for me. Yes, that greatly increases the cost of the book’s production, but babies like to feel the rough sparkles under their chubby little fingers, and I think it helps drive home the idea of metallics in general, so I saw that as a missed opportunity. There’s a riot of rainbow colors throughout the entire book though, so my 4 year-old was especially drawn to this one, as rainbows are all the rage in her world.

Next we’ve got a Christmas classic turned into a board book; The Nutcracker, from the story by E.T. A. Hoffman, illustrated by Don Daily didn’t fare so well in my house. It’s great that we have a more durable version of a holiday classic, but what’s the point of that if there’s way too much text on each page for any kid under four to pay attention to? Not surprisingly, my 18 month old lost interest quickly and didn’t care enough to even chew on the book (never a good sign) so he toddled off within the first few pages. I hoped his older sister would enjoy it more, as she’s the intended audience, but the illustrations were…creepy, so she didn’t really like it either. You know those picture books that feature grotesque-like faces, almost too realistic? This is unfortunately what this book suffers from. It’s a classic type of illustrating, but combined with the text-heavy pages it just lacked that hook that my daughter needed to stay engaged.

Last but definitely not least we have The Gift Inside the Box by Adam Grant and Allison Sweet Grant, illustrated by Diana Schoenbrun. This book immediately interested my kids because of the way you open it; there is a flap on the front cover that attaches to a velcro patch on the back cover, so whenever you open the book it’s like un-boxing a package. I’ve said it before and I’ll say it again-these gimmicks may seem silly to adults but kids love them, and it encourages them to read books, so I’m all for it.

The story is simple; a little package is looking for its recipient, someone to open him, but every time he comes across a new person they want to open him in hopes the gift he contains is for them alone. Whenever they state what they’re wanting, he bounces away from them, onto someone else. Finally, he discovers the rightful owner: a little girl who’s excited to gift him to someone else.

The message was a little subtle for my four-year-old, even the picture where the little box is crowded out by ‘mine’ speech bubbles didn’t seem to do the trick, so we talked about what the book was trying to ‘say’ to the reader. My explanation about the importance of giving and generosity didn’t sound as clear I would have liked it to, but I think she understood in the end. And there were lots of pictures with no text at all, so the opportunity for discussion comes up a lot in this one. This book isn’t a holiday book specifically, there is no mention of Christmas and it takes place in a snow-less season, but it’s particularly relevant around this time, which is why I’m slotting it in with the other two titles.

Us Canadians are lucky there is no shortage of books to gift our children, in fact, it’s a daily struggle for me NOT to purchase more books for them, so we’re allowed to be picky in what we pass along. I try to pay attention to what appeals most to my kids, and balance that with books that I think they should read because it offers a different perspective, has a good message, etc. No matter what you decide to get your kids this year, make sure there is a book or two underneath that tree for them.

*apologies to my Canadian readers, the book title uses the American spelling so for consistency sake I’m using it through the whole post