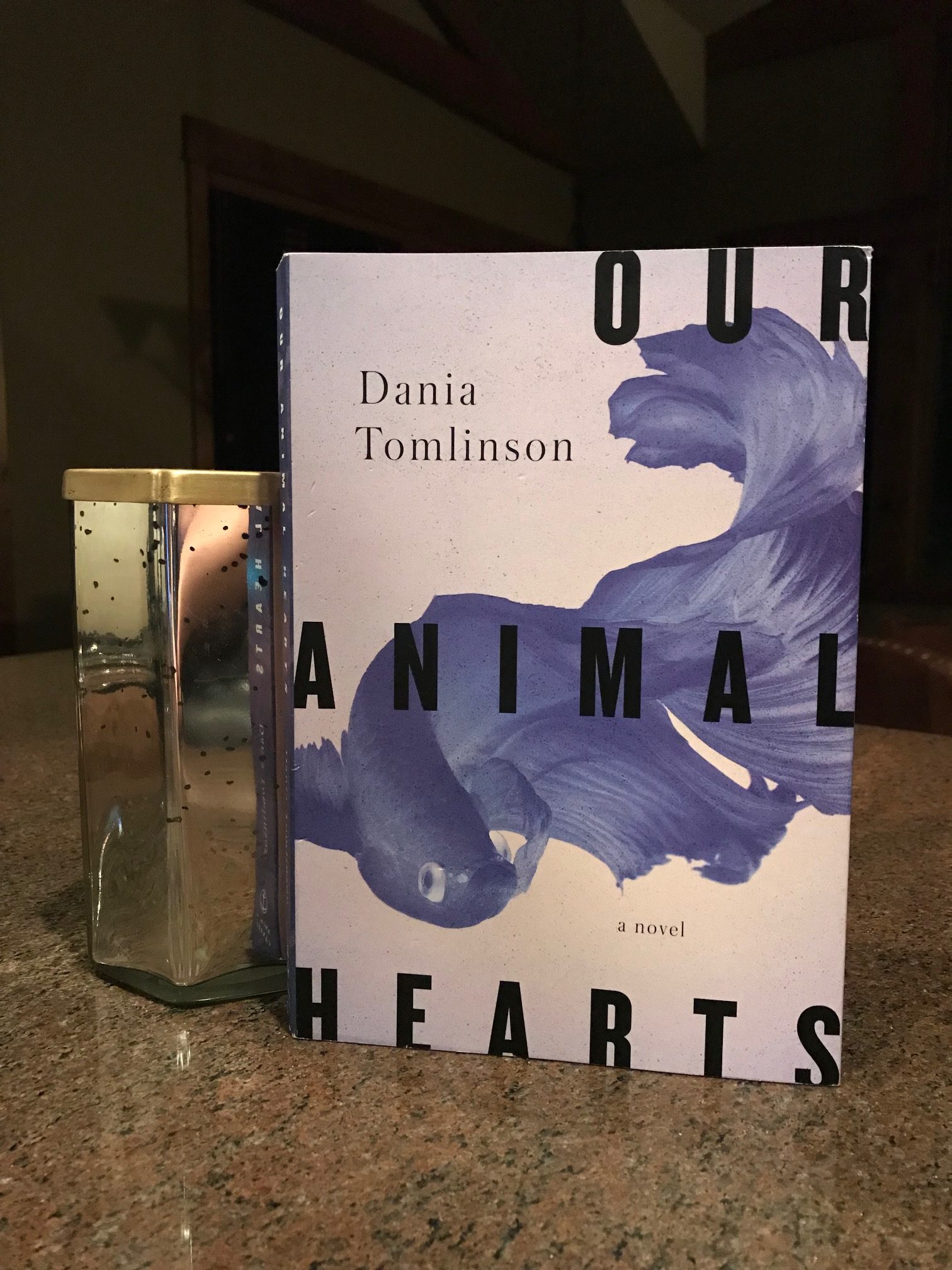 I wanted to review Our Animals Hearts by Dania Tomlinson because it features a mythical sea creature rumoured to live in the depths of the Okanagan Lake. I’ve swam in that lake, and as the ever-ready detective I am, kept my eye out for this loch-ness like animal/fish. Many people will know this creature as The Ogopogo, but Tomlinson gives us a fictional account of how the myth of the Ogopogo came to be, back when it was originally known as ‘Naitaka’ by the first indigenous peoples of that land. Before any white settlers came to that valley, there were nomadic tribes that roamed the area, familiar with the various animals they encountered in their travels. Although we only hear from one member of those tribes, readers are introduced to many of their myths through him, and even more stories of Welsh and Japanese mythology through other supporting characters.

We experience the story through the eyes of Iris, a preteen who lives in a small fictional community called Winteridge, situated on the banks of the Okanagan Lake. We follow her in 1904 through to 1941 as she grows from a precocious young girl desperate for her mother’s attention to a young woman caught in a sordid love triangle with the people employed on her father’s orchard. Iris’s mother Llewelyna is a larger than life character; she tells unsettling stories of magical creatures and their (usually) violent interactions with the human race, and she suffers from episodic seizures that leave her bedridden for days at a time. Iris’s father travels frequently, unsettled by Llewelyna’s condition, leaving Iris with an ailing mother and a community suspicious of her ‘visions’. Tensions between the Japanese workers, the British settlers and the Ukrainian immigrants slowly increase as WWI dawns, creating a story that explores cultural clashes at that time as well as the surprising overlap in the spiritual beliefs of each group.

Our protagonist Iris is a difficult character to describe. She is drawn in a very believable, authentic way, but that’s also upsetting to admit because she does some pretty horrible things throughout the story. I felt sorry for her because it was clear she was in desperate need of more affection, so went looking for it in all the wrong places . But she was also very independent, taking care of the people around her when they needed it the most. She walks a fine line between the spirit and the human world throughout the novel, for instance easily accepting the presence of a jaguar by her side for months at a time simply because she assumed she was doing penance for some misdeeds in the past (although this didn’t stop her from committing terrible acts afterwards). It’s not just her though, lots of people act selfishly, but one can hardly blame them when considering the conditions they experience.

I wished there had been more explanation and focus on the indigenous population of that area. As I mentioned in the opening paragraph, we only meet one man, “Henry”, who lives mostly in seclusion, but lends out his vast collection of books to the community who don’t have the luxury of a public library (one of the hardest parts about living there , in my opinion!). We catch glimpses of the spirits of the deceased natives who died of smallpox and other tragedies brought on by the settlers as Henry teaches Iris to see these ghosts who hide among the trees. Throughout the story their population remains largely silent, and aside from Henry’s infrequent appearances we don’t learn much about what came ‘before’. In addition to that minor storyline, we also get a glimpse into Canada’s WWI internment camps, and it’s only from reading other works of fiction was I familiar with this dark part of Canada’s past.

I’d recommend this book to those who seek a character-driven look at Canada’s history, although there isn’t much humour or lightness to this one, so please do keep that in mind. But for those who like to imagine what kind of scary things lurk in the depths of our lakes and oceans (like I do), and the various origins these myths unravel from, you’ll no doubt enjoy the mystery this book attempts to solve.