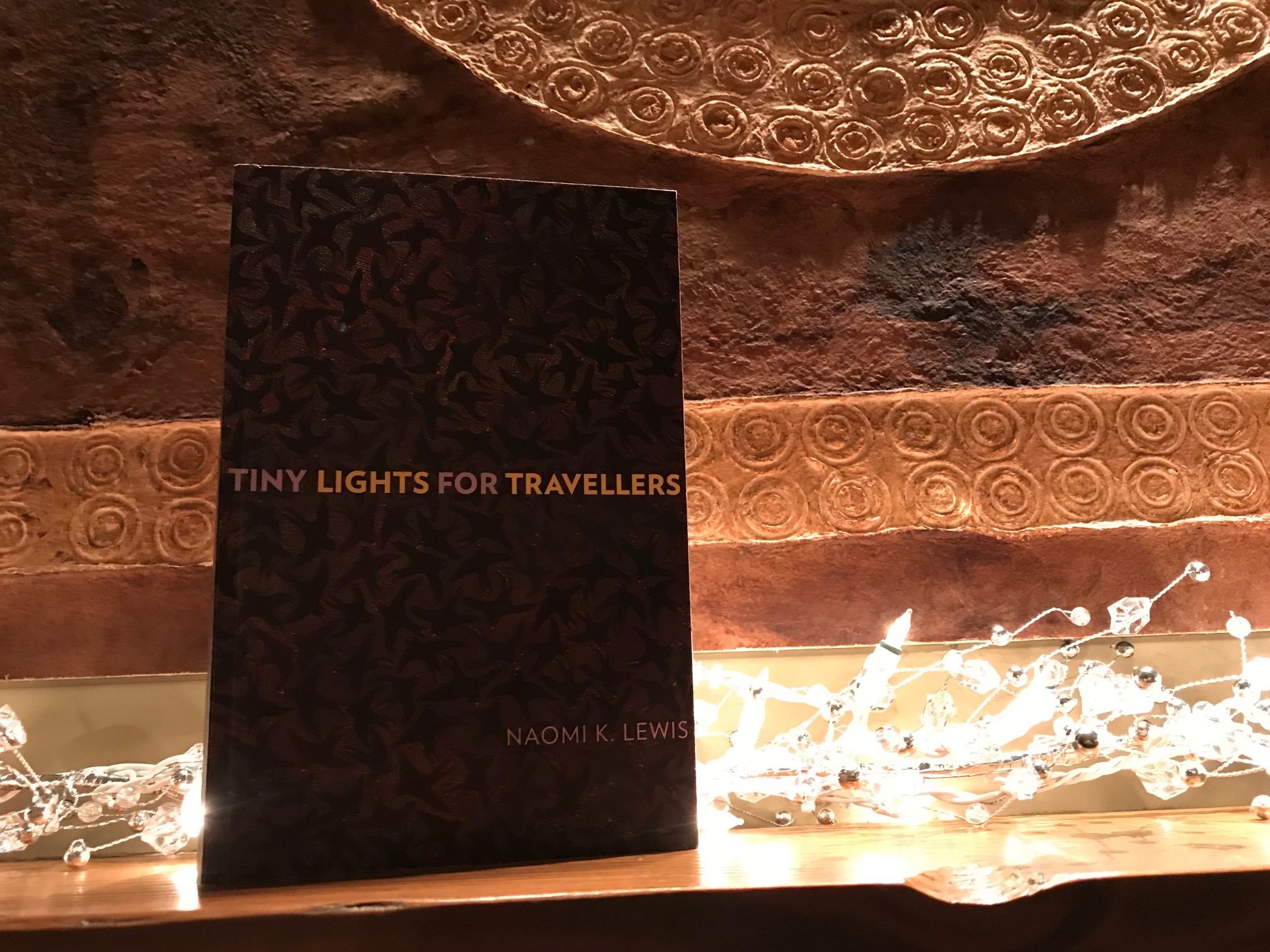 I realize that the word ‘brave’ is overused when describing memoirs, but simply writing an honest account of one’s life IS an act of bravery these day when a huge chunk of the population are hesitant to post a single unflattering picture of themselves on the internet. No one wants to read a book that rehashes how wonderful one’s life is with no bumps along the way, so the most successful and interesting memoirs are ones that honestly depict a life, the challenges and triumphs together. Tiny Lights for Travellers by Naomi K. Lewis is what we would call a successful memoir for two reasons; the first being it was shortlisted for the Governor General literary award for non-fiction, but more importantly, it was a genuine treat to read.

Full disclosure, I know the author personally, and I’ve reviewed another book of hers on this site. Although we don’t see each other on a regular basis, we orbit around one another in the wonderfully tight-knit community that is Alberta books. I also recently discovered we live in the same neighborhood, which I was delighted to learn, because I love the idea of running into people I know on the street. As followers of this blog already know, I am always nervous to read a book by a friend, because what if I don’t like it? I can once again breath a sigh of relief, because I not only enjoyed this book, I loved it.

Lewis writes primarily about two different things; her life, and her grandfather’s escape from the Nazi-occupied Netherlands in 1942. The ‘trigger’ of the story is Lewis’s divorce, which prompts her to push herself into an uncomfortable journey retracing her Opa’s steps from decades ago. While she recounts her trip making the same stops he did (albeit under very different circumstances), the narrative moves back and forth through time. Each chapter includes various jumps into the past and future: settling on a memory Lewis has of her childhood, then pushing forward to the present-day where she’s struggling to find a new suitcase while on her trip, then falling back again to the last few conversations she had with her husband about their failing marriage. Interspersed with Lewis’s words and recollections are her Opa’s actual words, taken from the journal she discovered among his things years after he died.

Despite the fact that major, dramatic life events are dealt with, Lewis resists the easy ‘eat, pray, love’ trope and does not rely on a clear-cut trajectory of self-discovery as she moves along in her journey. She doesn’t have any huge epiphany while navigating the crowded streets of Paris, and she doesn’t gain any life-altering perspectives while ruminating on her failed marriage. Instead, she simply reflects on her past, her childhood, her conflicted feelings about how “Jewish” she considers herself and how others view her, basically how all her experiences come together to form the person she is today. She attempts to do the same for her Opa, who was deceased at the time of her journey and her writing, so there is little to no closure for her, or the reader.

All of the above points may seem like criticisms, but in my mind, it is quite the opposite. Lewis has taken the harder road here, not tying things up neatly for herself or us, which is of course the most realistic way to portray a life, especially her own. Honest is another word I would use to describe this book to potential readers. Lewis describes a lovely afternoon of sitting by a river and eating a delicious sandwich in Amsterdam, but then sees a stream of liquid coming out beside her feet, quickly realizing she has leaned up against a cleverly disguised public urinal. She’s embarrassed about this, but states that she will leave out this unfortunate realization as she describes her day to her boyfriend in an email later. Who among us has NOT left out this minor, gross details to better portray our experiences? It’s such a typical, minor thing to do, but the fact that Lewis makes a fact of mentioning it demonstrates how important honesty in her writing is, and I truly appreciate that as a reader.

My favourite parts of this book center around Lewis’s struggles with her Jewish heritage. Even within her family there are arguments on whether Jews are a race or religion, and when she marries into a devout Jewish family, these questions are brought to the forefront of her life, forcing her to interrogate her internal motivations to become a ‘real’ Jew, even going so far as to question why her parents allowed her to get a nose job as a teenager. Once again, these things are complicated, the issues she deals with are not all solved, and many are made even more confusing the longer she dwells on them. Despite this, I felt as though this memoir gave us a complete and whole picture of Lewis as a human, person and soul. By laying bare what troubles her most we relate to her struggles, ultimately bolstered by the thought that we are all searching for answers and meaning, no matter who you are.