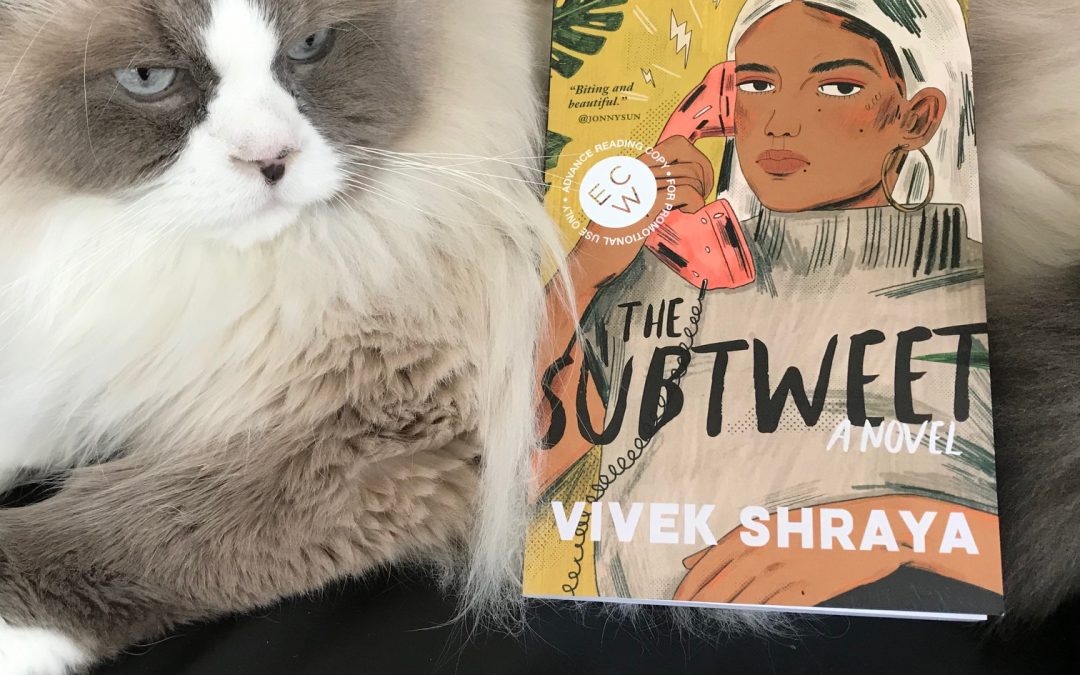 It’s hard for me to write an unbiased review of a Vivek Shraya book because I’m in awe of her: everything she’s accomplished, the marginalized groups she advocates for, and the seemingly limitless talents she possesses all come together to create one amazing lady. Also her hair always looks FABULOUS. I’m not sure how she accomplishes everything; she’s an assistant professor at the University of Calgary, a musician, she has her own publishing imprint and she’s an author with a steady output, and what’s more, she does all these things well! Anyway, I jumped at the chance to read her newest book The Subtweet, and in addition to teaching me what a subtweet is I really enjoyed reading this quick little dive into social media mayhem.

Neela Devaki is a musician living in Toronto, and one of her songs is covered by another woman Rukmini, a newly internet-famous musician who specializes in covers. They embark on a tenuous friendship, made complicated by the fact that Rukmini is going on tour and hardly available, so the majority of their conversations happen over text, which as we all kno, is a hotbed of misunderstanding, especially for those who don’t have years of history to fall back on. Feelings are hurt, texts are ignored, and in a fit of frustration Neela subtweets Rukmini, setting off a firestorm of gossip that threatens to ruin Rukmini’s career.

It’s ironic (am I using this word correctly? I never know) that the woman on the cover is on the telephone, because if one of the characters had simply called the other, and talked on the phone on a regular basis, the conflict would have been solved within a few short conversations rather than a complicated back and forth that spans months. But this book is about more than crossed wires or mixed signals, it highlights the challenges that people of colour face in the music industry. When Rukmini goes on tour to open for a very popular white singer, it calls into question who she’s playing music for, who she writes her songs for, and whether or not she’s trying to change her image as an Indian woman, to make it more palatable for a white audience. There’s also a thread of academic influence woven throughout, using feminist terms and concepts coined in a classroom and demonstrating the difficulty of taking those same ideas out into the real world. As someone who studied English literature in university, I could relate to this struggle.

Something else that I really enjoyed about this book is that it takes a deep dive into a strictly platonic friendship. It’s not about women trying to find themselves in relation to a man, or a lover of any kind; it’s just about a friendship, and how past relationships can affect the way you connect with future friends. This is a topic that isn’t dealt with enough in fiction, because romantic relationships always seem to take precedence, which is not only unfair, but unrealistic. Both Neela and Rukmini are single, they remain single throughout the book, and they don’t embark on some sort of quest to change that fact: they are single, the end. And what’s more, there is no explanation for why they are single, they just…are. Hurrah! I felt like this book was a step forward for all women everywhere for this fact alone.

As I said at the beginning of this review, The Subtweet is a quick and fun read. It’s introspective enough to keep you thinking long after you’re done reading, but it’s light enough to race through in a few days. I also recommend listening to the accompanying music that Vivek wrote, in fact, doing this before you even begin reading will undoubtedly enrich the experience.