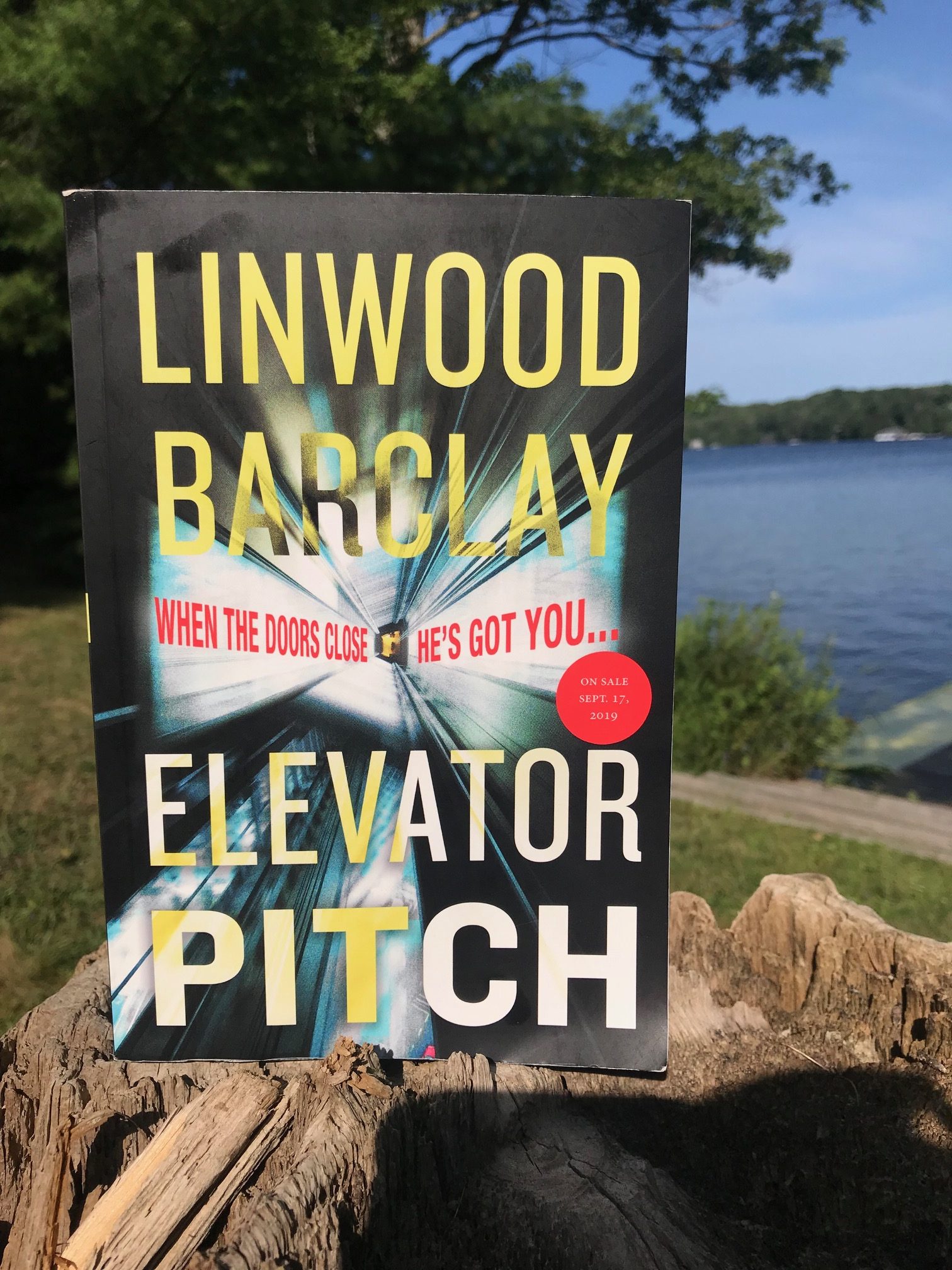 I read Elevator Pitch by Linwood Barclay in a place far far away from any kind of elevator. I was staying in a cabin in Northern Ontario, dodging mosquitoes but blissfully distant from any and all high rises. Barclay’s name is well known to me, as I’ve read previous books by him AND listened to my parents read aloud his Toronto Star columns when I was a kid. Somehow, he’s dodged the decline of print journalism and entered an even more competitive field; novel writing. And yet, he’s done extremely well in this late-life career change, selling millions of copies of books and having over 18 titles to his name. His latest is about the anxiety-inducing world of elevators in tall buildings, and although I don’t generally have a phobia about riding in them, this book will definitely cross my mind the next time I step into one.

Elevator Pitch reads like a mash-up of two popular genres; thriller and police procedural. We meet Detective Jerry Bourque, investigating the murder of a man who had all his fingertips cut off. Barbara Matheson is the journalist devoted to reporting on all the mishaps of the mayor of New York City, her loyal readership making her one of the city’s most-read woman in print, masking the difficult personal life she avoids at all costs. Eugene Clement is the leader of an alt-right group over-zealously dedicated to raising awareness of the rural American population that are being ‘overshadowed’ by the rising liberals on each coastline, and while getting to know all these different characters, each day of this particular week sees a new elevator-related death in New York City.

The back and forth between all these characters is what makes this such a great read. Barclay is careful to give us enough distinguishing information to keep everyone straight, but not too much that we feel one person is getting unequal treatment over another. They are all very different, coming from various backgrounds that make their perspectives unique and interesting to all types of readers. My favourite character is Barbara because her wit crackles through her chapters; she’s independent, tough and happy to go toe-to-toe with anyone in the city. This is one of the few books that I can recall feeling satisfied with the characterization of both genders equally; it’s something I’m becoming more sensitive to the wider I read, and Barclay has done an admirable job of writing in both the male and female perspective. Each chapter, regardless of perspective, rang true AND held my attention, not an easy feat these days.

The plotting was well done too; instead of guessing the ‘baddie’ by the middle of the novel, the villain came out of nowhere for me, and the red herrings that were included were extremely subtle, so I was tricked into thinking I had it figured out when I clearly did not. Each character was trying to work their way towards the solution as well: who was orchestrating these horrific and devious elevator killings? As the body count rose, people’s theories grew even more outlandish, but because we had a journalist, a police detective, and a municipal employee all working towards finding the killer, the reader could pick from a number of strategies being utilized. Being a mystery/thriller lover comes with its downsides because it becomes harder and harder to be surprised as I work my way through the latest in this genre, but this author clearly has a significant amount of creativity left in him. For those wanting to hitch their ride to a thriller writer with a full list of readable titles in their future, I’d highly recommend Linwood Barclay.