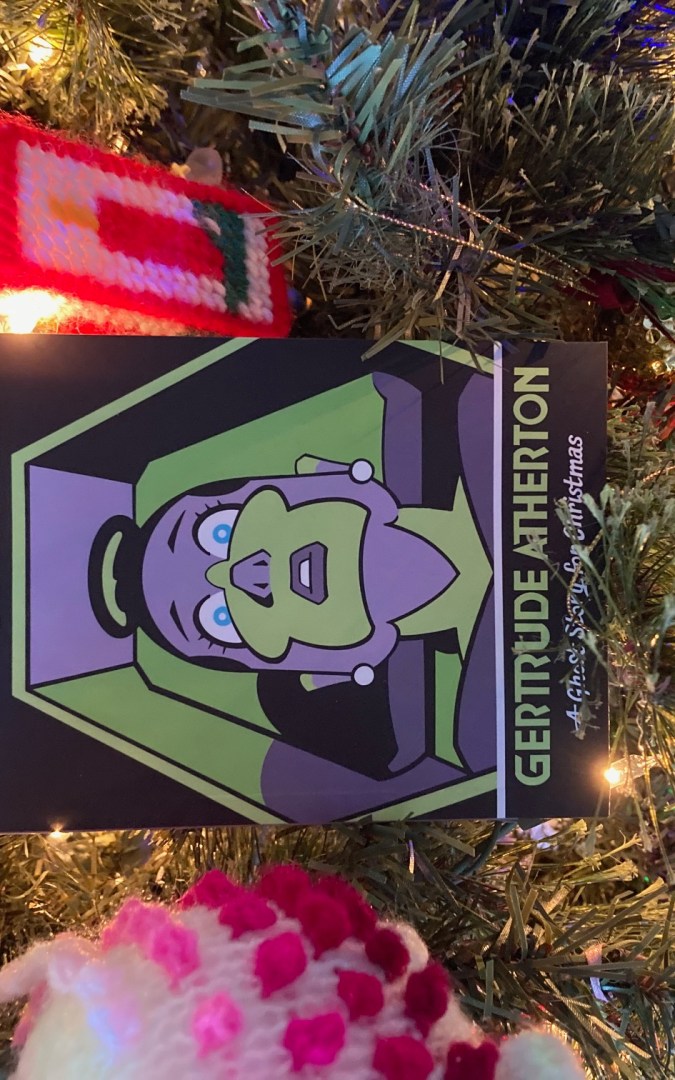 Last year I reviewed the three latest releases from Biblioasis’ Haunted Bookshelf Series, a set of pocket-sized ghost stories meant to be enjoyed on Christmas Eve, as per an old tradition. I loved them, and really enjoyed the whole concept of reading ghost stories for the holidays ( I appreciate a good scare any time of year!) so I was delighted to receive the next three in this series for review. These beautiful books are perfect stocking-stuffers, and even better is that they are beautifully illustrated by Canadian darling Seth. His distinctive drawings not only grace the covers, but are scattered throughout the books, offering each a wonderfully creepy but fun flavour. Likely many of my book blogger buds have read at least one of these tales in another format, as many are well-known and loved from other collections. Let me know in the comments which is your favourite!

First I dove into The Corner Shop by Lady Cynthia Asquith, originally published in 1926. It tells the story of a young man, tired from a long day of work, finding refuge from the cold bitter night in an antiques shop. He relishes the warm fire and welcoming tone of the two sisters who own it, and leaves with a unique gift. A few weeks later he finds himself stuck in a snow storm, again looking for refuge, but the only person working in the shop is an incredibly old man, and the shop itself is changed: dark with no lights. Out of pity our narrator buys a weird little glass frog for half a crown, later discovering it was a rare artifact and worth thousands. Feeling guilty, he returns to the store to give the owners half the the profits, also learning the true identity of that sad old man from a few weeks ago.

This story moves quickly so there isn’t time to get bored, but I must admit the beginning isn’t scary at all – tension only grows about halfway through, and it falls into the genre of ‘mystery’ more than ‘ghost story’ for the majority of it. Still, the contrast between the store visits certainly gave me a chill, and the moral/warning of the story is a nice reminder for the holiday season, so I can see why it was chosen as a holiday ghost story.

Next up is The Dead and the Countess by Gertude Atherton, originally published in 1905, a very poetic kind of story set among the gravestones of a seaside town. The local priest there is very upset by the fact that a train line is going in right past the cemetery: “…the hideous intruder from modern civilization, a train of cars with a screeching engine, that would shake the earth which held them and rend the peaceful air with such discordant sounds that neither dead nor living could sleep!” (p. 19). He’s right, and the dead buried there do awaken, and as he sits among the gravestones he can hear them moaning, horrified that they are stuck in a kind of purgatory with no place to go. Even worse, he can hear a baby crying for his mother, who was buried separately and he cannot reunite them.

The writing of this story is both obscure and ornamental, likely very common for that time period. We get beautiful descriptions of the village, and the toll it takes on its people dependent on the ocean for their food and money. So when they’ve lived such a difficult life, the sleep of the dead is what they deserve. For someone reading this book in 2022, the idea of a train as a piece of dangerous new technology is quite quaint, but I can see why it would be considered so disruptive back then. This one doesn’t have the spooky punchline the first story does, but it’s got an atmosphere of dread, which really suits the collection well.

Last is A Visit by Shirley Jackson, who I’ve really enjoyed reading in the past, so was really looking forward to this little story of hers, originally published in 1968. Although it contains echoes of a ghost story, it was merely suggestive, as opposed to outright horrific. Our narrator Margaret is a young girl, visiting her friend Carla at her home. They presumably attend boarding school together, so Margaret is there for an extended visit. Carl’s home is huge, more like a castle, and it contains some mysterious things, including a tiled picture of Margaret titled ‘she died for love’, and a locked up tower where a great-aunt supposedly lives in exile.

Reading more like a dream, this story always seemed on the verge of something terrifying, but never really coming out and saying it; similar to the lead-up in a haunted house story. Still, the lack of details and concrete evidence also adds to the general unsettling feeling one has while reading it, and when I reviewed other people’s thoughts on the story (a nice perk of reading a ‘classic’), it’s obvious it could do with another re-read to really get what Jackson was trying to impart here. The subtlety of this ghost story won’t appeal to everyone, but I’m excited to read more of Jackson’s stories now that I’ve been introduced to one of her nuanced but less popular works.