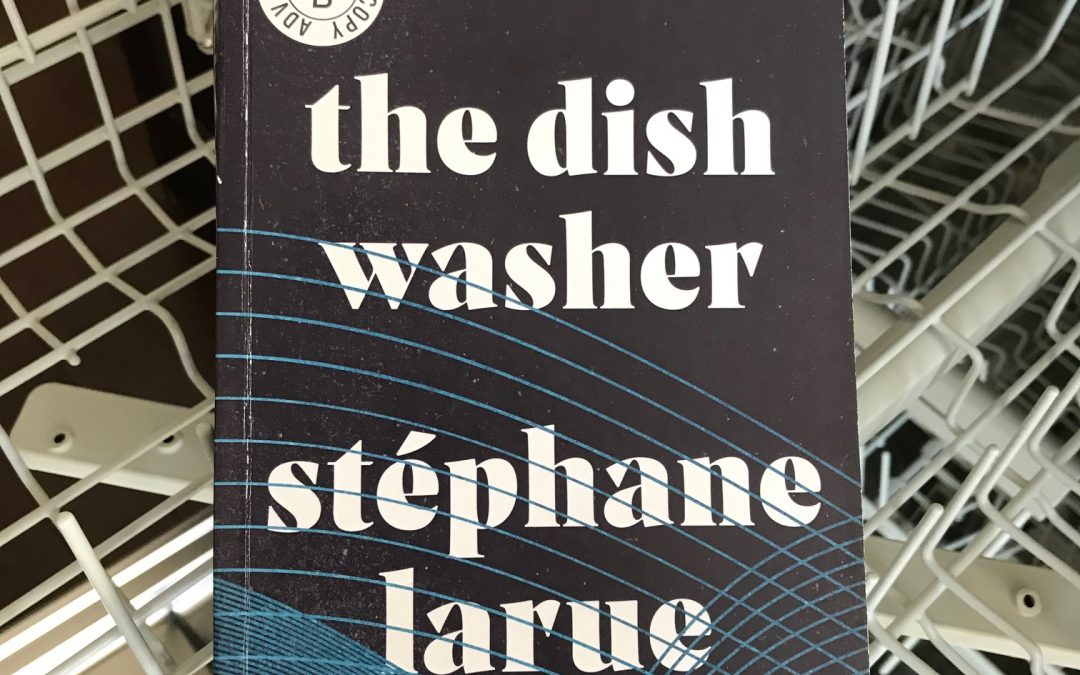 As I write this review, The Dishwasher by Stephane Laure, translated from the French by Pablo Strauss was named winner of the Amazon Canada First Novel Award just a few days ago. A prize devoted to first-time novelists only, it’s a highly-coveted way of launching one’s writing career, and the purse ain’t too shabby at $60,000. A few weeks ago when the shortlist was announced, I recognized The Dishwasher on the list because it had been on my bookshelf for a few months and I kept meaning to get to it; this was the push I needed, and I’m so thankful I did because I highly recommend this book.

Readers are swept along in an uncomfortable world of alcohol, violence, gambling, drugs and heavy metal music in The Dishwasher. A young man struggling with a hidden gambling addiction takes a job as a dishwasher at a fancy restaurant in Montreal to help pay off his debts and keep out of trouble. He’s flunking out of graphic design school because he never attends his classes but it’s clear he is talented; if only the VLT machines would quit their siren call when he’s done his restaurant shift in the wee hours of the morning. His eyes are quickly opened to the stress and toxic environment that a restaurant kitchen offers, but desperate to make money he sticks it out and jumps into the fray with the other complicated characters, many of them addicted to alcohol, drugs, or both. Although it sounds like a recipe for disaster (pun intended), he finds earnest friendships that act as a balm to his frantic lifestyle.

If you’ve seen the movie Uncut Gems, which is also about a gambling addiction, you’ll understand the kind of anxiety that reading this book will evoke, because watching that movie made me feel the exact same way I did when reading The Dishwasher (just not as intense). It’s not just the lies that build on top of each other that create the tension in this novel, it’s the environments we find ourselves in. Our protagonist is couch surfing at a friend’s house because he owes his old roommate money, so he’s permanently displaced. His workplace is hectic, and quite honestly, terrifying. People are screaming, cursing, crying and throwing things on an hourly basis, while major problems build up like the dishes he’s expected to clean at a superhuman rate. He’s promised to do work for a friend and was paid in advance for it, but instead of completing the task as expected, he puts it off and spends the advance on gambling at a strip club he frequents to avoid seeing anyone else he knows. He never gets a break, and neither does the reader.

The plotting of the novel actually eases the tension, if anything. The beginning of the book introduces us to our protagonist years later, when he has his life in order, and he’s found a semblance of normalcy and stability. Mohammed is a taxi driver who whisks our protagonist home each night, a fairy godmother of sorts, and meeting him later in the novel brings about a great sigh of relief when we realize how symbolic his appearance is. We know everything is going to turn out in the end, but the road to this destination is bumpy.

Despite the anxiety and tension of this novel, I really enjoyed reading it. The restaurant scenes were hectic, but more importantly, fascinating! Larue really gets into the nitty gritty of what it’s like to be a dishwasher, describing the food prep, the different machines used, the endless scrubbing and the physical toll it takes, and yet I was spellbound, the grueling work a wonderful distraction from the mess of a life he was set to return to once his shift was over. There’s also a strange satisfaction in reading about someone doing an ‘honest days work’, even when the character himself is far from honest.

The breadth of writing is incredibly impressive. At times I found myself barking out a laugh at what I’d just read (and yes, I laugh loudly, so describing it as a bark is accurate) while other lines stayed me with, forcing me to pause and enjoy what I had just read before moving on. Even though our protagonist is a young man with crude friends and a tendency to lie or manipulate, he is also thoughtful, and his inner dialogue reflects this increasing depth:

On a related note, another book that was shortlisted for the Amazon First Novel Award in 2020 was Western Alienation Merit Badge by Nancy Jo Cullen which I reviewed for Alberta Views Magazine. I also recommend reading that book as it’s a short snapshot of Alberta that has stayed with me long after finishing it.