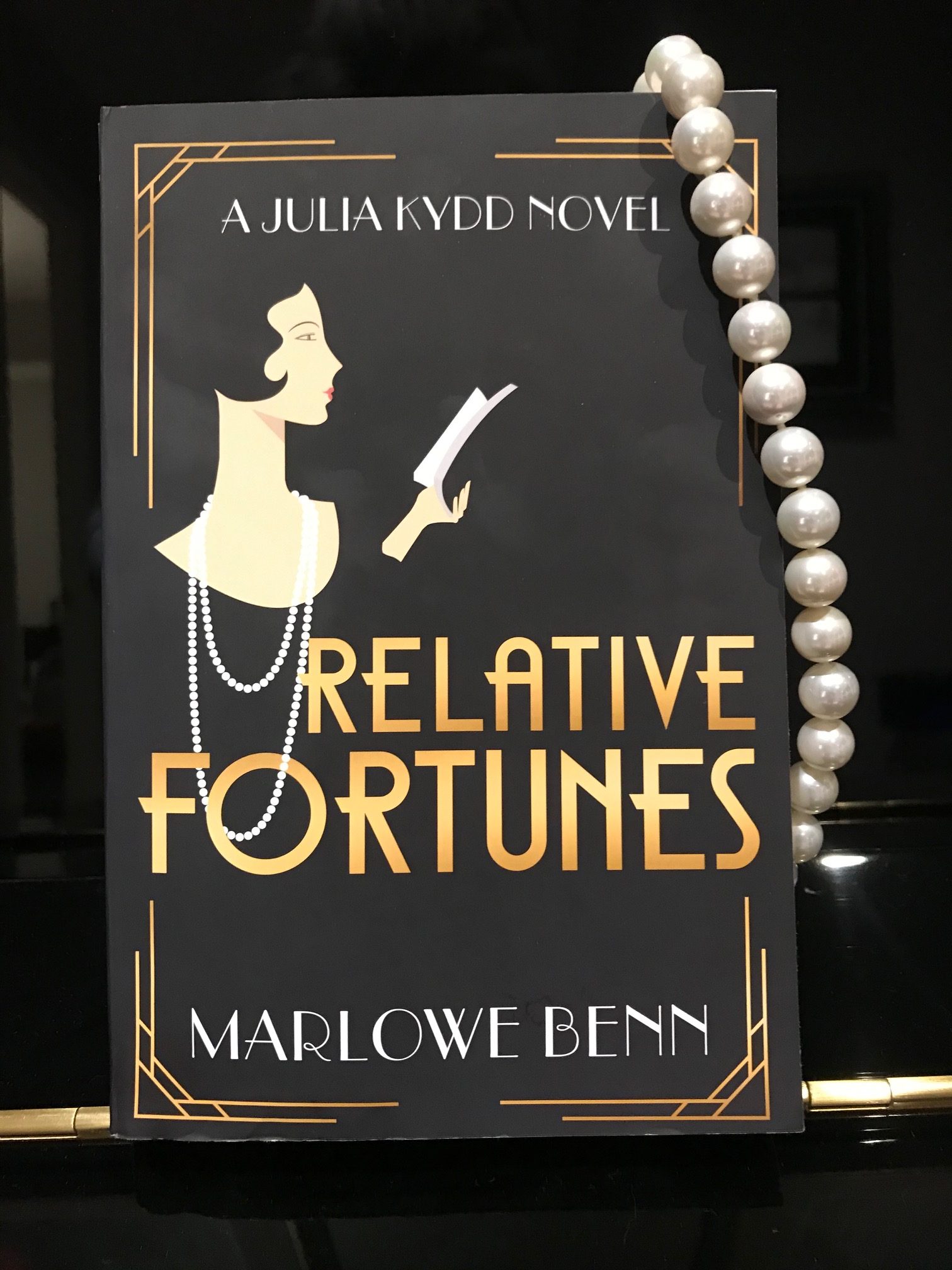 Mystery readers are a picky bunch, and I’m allowed to say that because I count myself as one of them. The pacing needs to be tight but not rushed, the detective needs to be believable but not unlikable, and the solution better be conclusive but not obvious. And don’t get me started on too many red herrings! For a mystery series to flourish readers must connect with the main crime-solver, and when writing the first book in a series, some authors can get so bogged down in establishing character that people will give up before any of the good stuff (i.e. murder) happens. One quick glance at the reviews of Relative Fortunes by first-time novelist Marlowe Benn suggests this debut falls into that very trap.

Our protagonist is Julia Kydd, a wealthy young woman visiting her estranged half-brother Philip in New York City. It’s 1924, so she hasn’t had control over her inheritance since her parents died. Philip has been doling out her allowance via cheque, and now that’s on the cusp of turning 25 and gaining control of her piece of the estate, he is contesting their father’s will. But that’s not Julia’s only issue, and not the only example of the lack of opportunities for women at that time. Glennis is Julia’s flighty and over-dramatic friend, pushed to the edge of reason once she discovers her older sister Naomi Rankin is dead of apparent suicide. Coming from a wealthy family as well, Naomi’s strange death is being swept under the rug to avoid a scandal, but both Glennis and Julia are determined to find out what really happened to Naomi, who was a celebrated suffragette and therefore embarrassment to her conservative family.

This book does a wonderful job of situating the reader in the ‘roaring 20s’. Short of sitting in on a history class, I learned the most about a particular time period than I ever have otherwise; Benn does a bang-up job of demonstrating an upper class woman’s fears, choices, limitations, and expectations so shortly after WWI. Manhattan’s elite are a fun bunch to read about and Julia is an especially appealing character because she’s a book-lover at heart. Her family is so wealthy she can afford to start her own vanity press, Capriole, which publishes custom versions of classic books accompanied by custom engravings and illustrations. At one point Julia’s friend invites her to visit a club of bibliophiles who discuss literature, typography, basically everything book-related, and my heart sang during this brief portion of the book. Many people would no doubt be bored by this section (according to goodreads, many indeed were) but I loved reading about it.

Although Julia lives a charmed life, the possibility of that all being taken away is raised when Philip tries to cut her off, and even though that may not seem like the end of the world to a modern-day woman, Julia has very few choices if his wishes come to fruition. She’s faced with a decision; “Marriage or employment? It came down to a choice between pragmatics and principles, between comfort and dignity” (p. 135). At the age of 25 she would be completely broke, with very little in employable skills, or she would need to marry, which everyone assumes she SHOULD do, but being the independent woman she is, she does not WANT to do. Even worse, the book incorporates and describes other female characters who are actively trying to suppress women’s rights, arguing their place is with the family only, and that men’s intelligence is more suited to business outside the house. Ugh. It all reminds me of the book I read about women who actively sabotage the contemporary feminist movement.

The book spends a great deal of time placing Julia within this historical context, demonstrating the motivations behind her distaste for marriage, her love of books, and her desire to cling to the life she’s always known. Because of this focus on Julia, the murder plot line takes a back seat, so for those who love a page-turner, the pacing can seem quite slow. But if the premise of this book and its feisty female detective appeals to you, I urge you to give the author a second chance, even if you find her first attempt too passive. Every great mystery novelist must start somewhere, so it’s much too early to write off Marlowe Benn. In fact, a quick visit to her website proves there is a second book in the series coming this June.